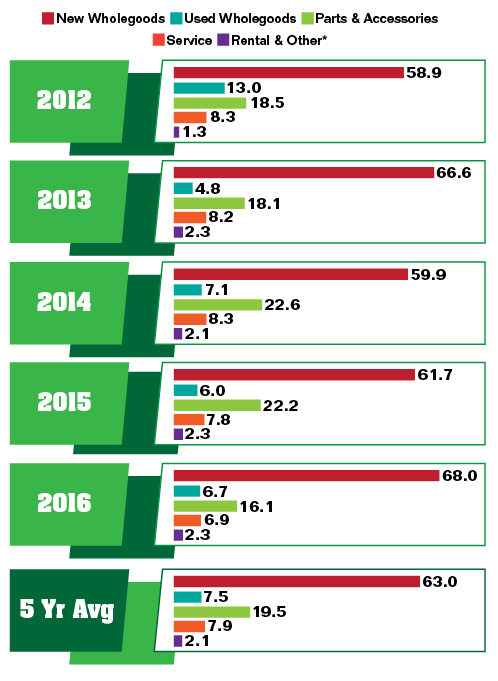 Over the 5 years studied, dealers showed an increasing reliance on new wholegoods to meet their revenue goals. During this period, new equipment made up 63% of sales.

*Other includes freight, delivery, warranty, outside labor and cash/volume discounts

Looking at the sales of parts and accessories between 2012-16, it appears in the years when new wholegoods decline, dealers have a greater potential to increase parts sales. For example, in 2014 when sales of new wholegoods fell close to their lowest levels, 59.9% of total revenues, parts and accessory sales peaked at 22.6% of total revenues. When sales of new equipment peaked at 68% of revenues, part and accessory sales dropped to their lowest level of the 5-year period, at 16.1% of revenues.

On average, over the 5-year period studied, revenues from parts and accessories averaged 19.5% of total revenues, second only to new equipment sales.

Sales of technical services would also seem to hold solid potential for increasing OPE dealers’ bottom line. Over the 5 years in question, service represented slightly less than 8% of total revenue. Service revenues held steady at about 8.3% during the first 3 years when sales of new wholegoods never got past $2 million. But as new equipment sales surpassed the $2 million mark in 2015 and reached nearly $3 million in the 2016 report, service revenues dipped below 8% and 7%, respectively.

This is most likely due to the fact that newer equipment requires less service compared to older products. However, this may also present an opportunity for dealers to increase preventative maintenance-type packages and sales to take advantage of the higher margins typically available with service.

Rex Collins, head of the Dealership Industry Group at HBK CPAs & Consultants, says as a percent of total revenues, a balanced revenue mix for OPE dealers would fall into the range of 62-68% for new equipment, 6-7% for used wholegoods, 16-22% for parts and 6-8% for service operations. Collins also suggests that given the higher gross profits generated in the service and parts departments, the most successful dealers are looking to grow those portions of the business.

Keep this first set of numbers handy — and share with your team — by downloading Measuring Up Chapter One: Revenue Mix.

Continue to the next page for Chapter 2: See How Your Expenses and Margins Stack Up.