A trip to EIMA International, an exhibition of agriculture equipment hosted biennially by FederUnacoma in Bologna, Italy, placed the words “rural lifestyle” in a new context. FederUnacoma is the Italian Agricultural Machinery Manufacturers Federation.

Italy annually produces about $10 billion worth of agricultural machinery, of which 60% is exported to more than 150 countries. U.S. imports of Italian farm machinery (including component parts) totaled about $774 million in 2013 and about 125 U.S. companies import agricultural equipment directly from Italian manufacturers.

Italy, a country about three-fourths the size of California, has more than 2.6 million farms. The average size is about 20 acres — the equivalent of a rural lifestyle type property in the U.S. These Italian farms raise a variety of crops in 21 different landscapes. Italian equipment manufacturers develop niche products for their region and farmers are loyal to those regional manufacturers. To survive and grow, Italian farm equipment manufacturers need to export. In fact, the country exports nearly 60% of its farm machinery. One manufacturer I spoke with exports nearly 98% of his products.

The U.S. is a prime market for those exports, increasing 23.6% for the first 8 months of this year compared with the same timeframe in 2013. Industry groups, such as FederUnacoma, are developing initiatives to increase exports to the U.S., especially because exports to European countries have been declining. In a news conference, FederUnacoma President Massimo Goldoni and Italian Trade Agency President Riccardo Monti said the association has been focusing on the East and West Coasts and are expanding efforts in such states as Texas, Colorado, Tennessee and Georgia. They cited Italy’s “simple machines” as one of their niche advantages. Through their global efforts, Monti says their goal is to reach 6 billion euro in farm machinery exports within the next 5 years, up from the current 4 billion euro. 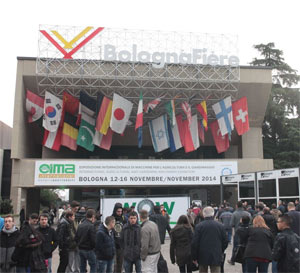 Two long-time U.S. distributors of Italian farm machinery say service and partnerships are key to their relationships with Italian manufacturers and their U.S. customers. Dick Price, president of Price Brothers Equipment, distributes hay rakes and other products from Sitrex as well as products from other European manufacturers. He says, “We believe the support from our suppliers can outperform the majors.”

Gianni Di Nardo, general secretary for UNACMA, the national union of agricultural machinery dealers, says customer access to credit is an issue for Italian dealers. Unlike the U.S., it’s not typical for manufacturers to provide credit. Di Nardo says the partnerships that FederUnacoma provides will create opportunities for dealers. However, less than 15% of dealers belong to UNACMA, so a priority is to expand dealer involvement in the organization.

Italian dealers face issues similar to their counterparts in the U.S. For instance, 5 years ago, John Deere had 45 dealers and has now consolidated its network to 28 dealers. Service is a topic for Kubota dealers with the introduction of the larger M7 series. The series is manufactured in France, so Kubota’s exhibit marketed “Made in Europe for Europe.” A Kubota representative says they are seeking specific dealers who have the facilities needed to service these larger tractors.

Our Rural Lifestyle Dealer team attended GIE+Expo several weeks ago, so it was interesting to compare U.S. and Italian product lineups for the small ag and turf market.

Two equipment lines that have had significant growth in the U.S. — zero-turn mowers and UTVs — may be slower to be adopted in Italy and perhaps other areas of Europe.The U.S. has the rural lifestyle segment to span the gap between the ag and homeowner markets and offer good sales opportunities for these categories of products.That may change, though, as the smaller zero turns are winning over homeowners, says the distributor for Hustler.

The incorporation of technology was a theme at GIE, so this Italian product caught my eye, the Mini Green Climber, a remote controlled brush cutter for slopes that is now beginning distribution in the U.S. MultiOne is another Italian company that recently began distribution in the U.S. and exhibited for the first time this year at GIE. They manufacture articulated loaders and attachments. The new articulated brush cutter from Ecotech Italia stood out for its innovative advances on a traditional product. View other equipment in our EIMA photo gallery.

Also, New Holland’s new T3F tractor won the specialized tractor of the year award. Learn more about all of the award winners.

The EIMA show had an Italian focus, but offered the universal themes of innovation, partnerships and customer service.