What Rural Lifestylers Want From You: Beef: It's a Hobby & a Job

The respect and good service one couple gets from their dealership is enough to win nearly all of their equipment business.

Whether you can consider Seboldt Farms a hobby or a job depends on which Seboldt you're asking.

"I tell people I don't have time for a real job, and I really don't," says Diana Seboldt of Seboldt Farms, a registered Polled Hereford cattle operation in Ozark, Mo. She keeps the day-to-day aspects of the farm moving, while her husband, Tom, works as an corporate executive in the big city. "I always say it's a full-time job for me and a hobby for Tom."

Diana and Tom Seboldt grew up in the area and each have a farm background. Tom was raised on a 40-acre livestock operation and spent summers lifting hay bales. 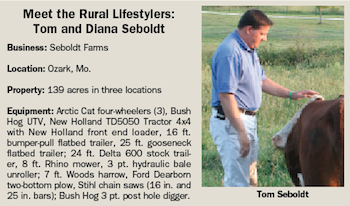 "After we got married, we lived in town for a couple of years," says Tom, "but we really wanted to get back to the country. We eventually bought a couple acres and a house but it wasn't enough property for livestock. When we bought our current house 10 years ago, we decided to get back into cattle."

They bought cattle from a local sale barn, and about a year later decided to get into Herefords. "You never know what you're getting from a sale barn and we had some wild cows. Just one in the bunch will make the entire herd wild," says Tom. "We got out of crossbreeds and have focused on Polled Herefords for 7 years."

Cattle roam 16 acres where they live outside of Ozark, and they own another 81 acres in a neighboring town. Tom also uses 42 acres around his Mom's farm for hay and cattle.

"I raise cattle, but have to make sure I'm good at raising hay," says Tom. He hires out the job of round-baling the crop. "I haven't purchased any baling equipment, but would like to when I have more time. Baling equipment isn't cheap and it's tough to maintain. You've got to bale a lot of hay to justify it. I'm only putting up around 120 bales a year." For now, owning a baler is something on the list of equipment they'll purchase when he retires. 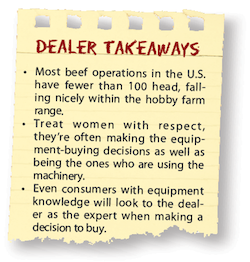 During the winter, they move all of their cattle to land around the house so the herd is easier to feed. "For several years, we went back and forth between feeding at my mom's with a tractor and here with a truck, but that was a lot of running around. I've got a bale buggy that I bought from S&H Farm Supply that I use to haul a bale out to the field when we're feeding at both places. We have fed for the past several years with our tractor and a bale unroller. That cuts down on wasted hay."

Farming From the Road

Tom is vice president of merchandising for O'Reilly Automotive, a retail auto parts chain that's headquartered in Springfield, Mo. His department procures the merchandise that gets sold in more than 3,600 company owned stores throughout the U.S.

He does a lot of traveling as part of his job, which takes him away from the farm and puts Diana firmly in charge. "She can operate any piece of equipment we have," he says. "The last time we bought a tractor, we looked at the price difference between one with a cab and without. We decided to pay the difference because she feeds the cattle most of the time. Even when I'm in town, she'll feed before I get home. It makes it nice that she can be in a cab during the cold months. And in the summer it feels nice to run that air conditioner."

The tractor the Seboldts brought home is an 85-horsepower New Holland TD5050 with a cab and a bucket.

"I've worked with S&H for years, and I've purchased nearly all of my equipment from them. "For this latest purchase, I traded in a tractor and bought the New Holland because I was doing work that was bigger than my other tractor could handle. I'm running a no-till drill and discing and other things, and knew I couldn't do it all with the tractor I had." 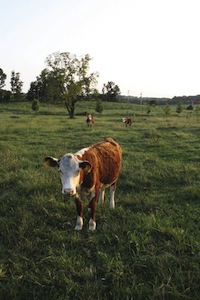 Polled Herefords are a naturally hornless breed of cattle developed by a breeder in Iowa. The breed came into being in 1901 with 11 registrations.

That type of information is one of things he wants to get when he meets with an equipment dealer. Tom talked with the staff at the dealership about his options. "I may know more about tractors than others," he says, "but they're very good at talking to people who didn't grow up around this equipment. I told them what I was doing and they said, 'We think this tractor can do anything you'd ever want.' They're good about getting you in the right equipment."

When Rural Lifestyle Dealer met with the Seboldts at their farm in Ozark, Diana had just returned from a trip to the dealership. She'd delivered a UTV that has been giving them fits. "I like that the staff knows who we are. I always feel if we need something done they're going to do whatever they can to make it happen."

Most of all, however, they treat Diana with respect. "I used to work in a lumber yard and I was the only girl there," she says. "I had customers who would not let me wait on them because they didn't think I knew what I was talking about. They would wait 15 minutes until one of the guys was available. The staff is always nice to me, and most of the time I'm at the dealership by myself because Tom's at work."

Seboldt Farms sells the beef from its cattle through ads on Craigslist as well as word-of-mouth. "We haul the Herefords to Lockwood, Mo., to have them custom cut based on orders," says Tom. "We'll handle all of that work, get it butchered per request and then deliver it to the buyer's house pre-packaged and ready to go. All the customer needs to do is save the freezer space."

Tom Seboldt says they debated on paying the extra money for a tractor cab. But since cattle eat regardless of whether it’s hot or cold outside, the extra comfort was worth the cost.

Lately, Tom says they've been getting more business because of their prices. "We really haven't changed the price per pound over the years, and our customers know the quality is a lot higher than what they can get at the stores. Plus, we deliver and they like knowing where the beef came from and how it was raised."

The Seboldts keep the herd at a size they can handle comfortably, between 30-40 head depending on the time of year. "We're not trying to have a 50-cow herd. We don't have the land to handle it," says Tom.

According to statistics from the National Cattleman's Beef Assn., Missouri is number two in the nation in terms of the number of farms raising beef cattle, second only to Texas. In Missouri, there are 52,000 such operations raising a total of 3.95 million head, which adds more than $2 billion to Missouri's economy.

Nationwide, there are 766,350 beef cattle operations, and Seboldt Farms is right at the nationwide average for herd size: 90% of them are under 100 cows, with the average at 44 head.

"It's hard to be a farmer full-time," says Tom. "But we depend on farmers. I get disgusted how most people today have no clue how food gets on their table. I talk to a lot of people because I travel for my job, and I've been all over the country. When I talk to people about what I do as a hobby, they're surprised. They think beef just shows up at their grocery store."

Perhaps as a way to educate people about the value farmers bring to everyday life, "And because we didn't have enough to do," says Tom, "we decided to open a pumpkin patch, petting zoo and corn maze last year."

It was such a success they're doing it again this year on a 20-acre property owned by a friend who helped them previously. Some 5,000 people came out to the farm over the course of 5 weekends last year. 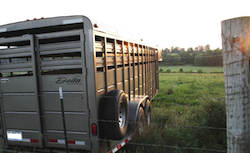 For rural lifestylers who raise cattle and other animals, a stock trailer is an essential purchase. Seboldt Farms uses this 24-foot trailer to haul cattle between pastures as well to market.

The conditions were perfect for the event, but already this summer's hot, dry weather has added some challenges. "We drilled the field twice but the corn didn't come up," says Tom. "So we're going to improvise on our maze with paneling and hay bales."

People pay $8 for kids 13 and older, $7 for 5-12 year-olds, and nothing for kids 4 or under. Groups also visit and they're offered a better rate on the admission price. Parents held birthday parties at the farm, and one family had such a good time they came back every weekend it was open.

"Although this area of Christian County is still very rural and has a lot of agriculture, a lot of people just don't get out," says Tom. "We drew people from Springfield and they don't get to be on a farm that often."

The Seboldts believe the value they're bringing to the people of the community can be summed up in one question they got from a youngster who was out at the farm last October. While petting one of their Hereford calves, he looked up at Diana and asked, 'What kind of dog is this?'"

What Rural Lifestylers Want From You: A Tale of Two Customers

What Rural Lifestylers Want From You: Ken Kozminski

What Rural Lifestylers Want From You: Committed to Stewardship