At Blue Fox Farm, the tractor is old but the fuel is new.

Like a small but growing number of organic farmers around the country, Chris Jagger has converted an old Allis-Chalmers Model G tractor built in the 1940s to run on electricity at his farm in southwest Oregon.

They like the small tractor's nimble ways around row crops. And with an electric motor instead of a gasoline engine bolted on the back, it runs cleanly, quietly and slowly with no belches of exhaust, few breakdowns and no direct consumption of fossil fuel.

Jagger still plugs into the grid back at the barn, but some farmers are setting up photovoltaic panels in the fields or on the tractors to draw power from the same source that grows their vegetables: the rays of the sun. 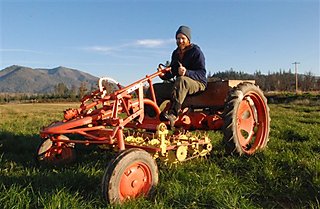 Chris Jagger shows off the Allis-Chalmers Model G tractor he converted to electric drive on his Blue Fox Farm near Applegate, Ore. A small but growing number of organic farmers have been converting the tractors, which are well suited to small farms. (AP Photo/Jeff Barnard)

"As long as I'm alive, I am probably always going to be dependent on petroleum myself," said Jagger, who has a conventional tractor for heavier work at his farm outside Applegate. "But I think it's important to be always making a step in the direction of looking for alternatives."

The founding father of the idea, organic farmer Ron Khosla in New Paltz, N.Y., is embarrassed to admit that when he built his first one in the winter of 2001-2002, he was not interested in saving the Earth so much as finding a less smelly and more reliable alternative to his Model G's balky gasoline engine.

"There was no idealism in my conversion," he wrote in an e-mail to The Associated Press. "I thought electric motors would be no maintenance."

He said the torque curves are flatter than with gas or diesel engines, and it was easy to double the power. Plus, the machines can be driven extremely slowly.

"We have two of them now, and they're terrific," he added. "Absolutely no trouble with the motors. I have had connections to the batteries loosen up and cause sparking, but that's just because I'm an idiot, and you tighten a bolt and you're back in business."

Khosla has no idea how many electric Gs are out there, because he quit counting after he got to 100. A number of farmers are doing it themselves after reading the directions he posted on the Web with a sustainable farming grant. They can buy conversion kits on the Web from various producers.

Between the tractor and the conversion, Khosla figures a farmer can put one together for about $3,000, though the growing demand for Model Gs is driving up the price.

"The first 100, I was so excited," Khosla said. "Every single person, I remembered their names. I would get every once in a while a little newspaper clipping or e-mail that they were in some parade. It's really amazing."

Jagger stumbled on those directions doing a Google search.

"I was really thinking about doing this, but didn't want to reinvent the wheel, and there it was," Jagger said.

He tracked down a Model G with a blown engine in Corvallis, a city about 200 miles north of his Blue Fox Farm where Jim Corliss was converting them to run on bio-diesel.

"When I bought this thing, it was completely rusted out," Jagger said. "I repacked the bearings, fixed all the joints. The guy said, 'There's no engine on it.' And I said, 'Yeah, that's exactly what I want, because I'm going to be doing this electric conversion to it.'"

Corliss was inspired to start doing electric conversions, too, and has done seven, compared to 155 diesels.

Nearby, Oregon State University has one on its vegetable research farm.

On the other side of the country in Waterford, Maine, retired engineer John Howe has converted a Ford Model 8N tractor and equipped it with a photo voltaic panel that doubles as a sun shade.

"Here is the rub," he said. "It takes about 80 pounds of lead-acid battery to equal one pound of gasoline, to carry the same amount of energy.

"My Ford tractors have 1,200 pounds of lead acid batteries," which is fine, he said, because tractors often need extra weight for traction on soft ground. But, "You can only do serious work for about two hours with the energy you have on board."

That's no problem for the Model G, which is not powerful enough for plowing but well suited for light jobs such as seeding, weeding and cultivating.

Khosla has one Model G with six 8-volt batteries and one with four 12-volt batteries. He finds he can work off-and-on all morning, give it a booster charge over lunch and be back in business.

With old Model Gs becoming harder to find, Khosla has been working on something completely different, designed from the ground up around an electric motor. He wants it to do everything the Model G will do, and be simple enough that a farmer in the developing world can weld a frame together, then mount an electric motor onto it. He has built three prototypes and figures it will be ready to go after two more.

"If you are working with electric motors, it like totally frees your mind," he said. "The new tractors I'm building look really different.