With the click of a mouse, a consortium of Case IH dealerships in central Ohio bought one of the most unique skid steers around and became a major benefactor of the FFA at national, regional and local levels. The final bid of $77,000 won Evolution AG LLC the online auction for “Red Power” – a one-of-a-kind skid steer donated by Case IH to raise funds for the organization. Evolution AG LLC is a recently formed Case IH dealership and is already having an impact with its support of Agricultural Education and the FFA. 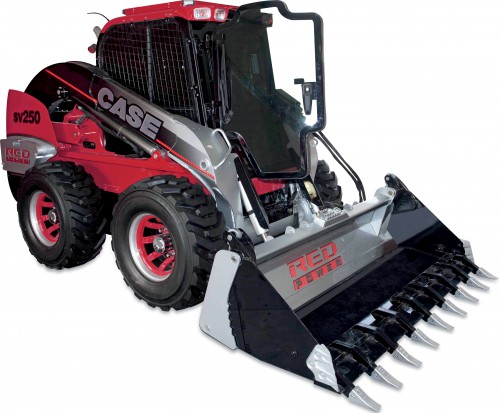 This "Red Power" skid steer was recently auctioned off by a group of Case IH dealerships in Ohio to raise money for the FFA. The final bid for the one-of-a-kind piece of equipment was $77,000.

In fact, 89 percent of the sale proceeds will go to the National FFA Foundation and 10 percent to the Ohio FFA Foundation. One percent will be awarded to Buckeye Valley FFA, the local chapter selected by Evolution AG LLC, which is the parent of JR Equipment, Inc., Hill Implement Co., and Agri-Trac, all with locations in Ohio.

“We congratulate Evolution AG on its winning bid,” says Kyle Russell, Case IH Senior Director of Marketing. “Case IH has a long history of support for FFA and youth programs, and we are proud to contribute to a program that has done so much to help students Be Ready for future careers in agriculture.”

Doug Loudenslager, one of the owners of Evolution AG LLC is thrilled to bring “Red Power” to Ohio. As a former FFA member and national officer, he knows the tremendous impact the organization has on members, as well as communities. He also served as Chief Operating Officer of the National FFA Organization and National FFA Foundation from 2004 to 2009.

“Evolution AG and Case IH recognize the big job in front of us,” says Loudenslager. “It is widely recognized that we’ll need to double food production in the next 30 years. It’s going to take not only new developments in technology and equipment, we also are going to need talented and motivated young people who are excited about the opportunities offered in the agricultural industry.

Anything we can do to encourage young people, especially at the high school level to get a good educational and leadership development foundation with agricultural education and the FFA, and then go on to post-secondary education, will help us collectively as an industry.”

The auction was conducted by Purple Wave, a full-service equipment auction firm, from Aug. 28 through Sept. 30. Purple Wave donated its 10 percent buyer’s fee to support FFA as well. “We were honored to be part of this project to benefit the unparalleled programs the FFA delivers,” says Jerrod Westfahl, President and Chief Executive Officer of Purple Wave.

“We truly appreciate this significant contribution from Case IH and Purple Wave to support FFA programs and activities,” says Rob Cooper, National FFA Foundation Executive Director. “Proceeds from the sale of the Case IH ‘Red Power’ skid steer will help our members on the local, state and national level.”

Buckeye Valley FFA Adviser Jamie Gregory is excited to have the additional funds and plans to use them to bolster ongoing programs within the chapter.