The retail industry has been slammed by the recession and cutbacks in consumer spending, but Jim Wright, CEO and chairman of Brentwood-based Tractor Supply Co. isn't experiencing the brunt of the pain.

In fact, Tractor Supply, which sells items that include lawnmowers, rugged wear and feed for cows and sheep, is continuing to grow. The Brentwood-based retailer's sales in fiscal 2009 grew 6.6 percent, to $3.21 billion, and its net income rose nearly 41 percent. This year, the company plans to add 70 to 80 stores to its existing 930 locations in 44 states. 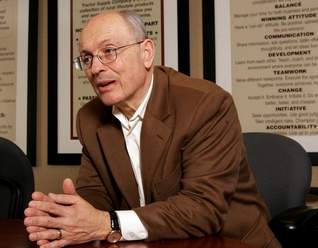 The recession didn't affect rural America as much as larger cities, Wright said. The retailer's customers, who own land and often horses, had always been credit conservative, he added.

Wright talked with business reporter Wendy Lee about Tractor Supply's strategy moving forward, the possibility of opening stores abroad and changes to its merchandise mix to deal with what Wright calls as "a new frugality in America."

What impact did the recession have on your business?

In January 2008, we noticed consumer behavior was changing. They began to use more cash, more debit cards, less use of credit cards. They began to buy fewer large-ticket items and they moved their purchasing more into repair parts and consumable products.

Over the next three months, I was able to be in front of the top 1,000 people in our company and deliver our plan of action, which was to cut costs where we could, to help our customers save money, to refocus our merchandise mix on consumable, usable and edible products, to reduce inventory on high-ticket goods such as lawnmowers and air compressors, and my personal goal for the recession was, when it ended, every current and contributing team member would still be with us.

Were you able to keep that personal goal?

I was. While a few folks who couldn't keep up the pace are no longer with us, we actually added 1,500 jobs during the recession.

When do you expect the recession to be over?

I'm not sure when we'll get the official announcement. Frankly, I'm not sure if that means a great deal to our company.

The consumer outlook on spending versus saving … has changed, maybe not forever, but certainly for the next few years. Consumers will continue to be cautious. Cheap is the new chic. They are no longer trading up. They are buying durable, functional, quality goods. They are buying repair parts to keep large-ticket goods such as riding lawnmowers going a season or two longer. There's a new frugality in America.

How has that affected the average purchase at Tractor Supply?

Our average ticket has been down for two years in a row now. Our offset to that was to shift our mix of goods so we could have a traffic increase. We had more customers visiting our stores in 2008 and 2009 than we had in prior years. That's a result of emphasizing pet products, pet food and large-animal feed.

Why are more people buying feed for large animals?

Historically, large animal feed has reached the consumer through independent feed stores. They generally open only five days a week … Consumers have discovered our stores are open 84 hours a week, including Sundays, and they serve them when they have a need to buy feed.

Tell me about the snack barn, one of your strategies to get through the recession.

There are two strategies within that strategy. One is you walk into a Tractor Supply store. You'll find cases of 24 bottles of water for $3. We don't make any money on it, but we sell it to serve our customers who frequently carry water on their pickup trucks or put a case on their tractor.

When you buy water, you need a shopping cart. (When) you put it in, that water looks kind of lonely in that shopping cart by itself. It's our hope they will put some other things in there with it.

… On the way out of the store, you have the salty snacks and nuts and crackers that sell for less than a dollar. This is a new business for us. It's evolved over the last year or so.

Who are your target customers?

They generally live in small-town America on the edge of suburbia. They are more likely than the average American to be married with children. Average age is around 50. They make about 15 percent more than the average American household. … The common denominator is they own acreage. They enjoy the land. They enjoy the animals. They are likely to own a pickup truck that probably doesn't get washed too often.

What trends are you seeing for people moving to rural America in the future?

People continue to move out to rural America. We think many baby boomers will retire in rural America. … Now that broadband Internet speed has come, people who are still working are able to move further away from the city center, maybe telecommute a couple of days a week and make the drive into the city two or three days a week. We see ourselves very well positioned for the long term.

Private label brands represent 21 percent of sales. How important is this line of business?

Private label is very important to our company and to consumers in America. Consumers have discovered they can get equal value, durability and functionality for a lower price if they buy a high-quality private brand. One of our most significant private brands is a brand of rugged work wear called C.E. Schmidt, named after our founder. We will continue to expand (this) brand. We are introducing a new package of private brand lubricants this year.

Last year, the company decided to eliminate television advertising. What were the results of that decision?

The elimination of television in 2009 would be considered by many to be a pretty bold move. Over a number of years here at Tractor Supply, we had not been able to correlate advertising spending on television with more customer traffic or more sales. We took the chance to eliminate television spending last year to save money, take it to our shareholders and profit, and reinvest some of that money in direct mail to our consumers. The TV budget last year was around $15 million.

How do you plan on marketing the company?

There will be no TV ads this year. We will continue to use newspaper inserts as well as e-mail and direct mail to our customers.

Other retailers have looked at mobile and social networking sites to reach customers. Is Tractor Supply considering this?

We believe that social networking is for us. … A consumer who raises draft horses in Maine might strike up a conversation with a consumer who raises draft horses in Louisiana. They can meet, exchange ideas and have a conversation. In the meantime, Tractor Supply is in the background, enabling all of this. I believe we will have some type of social networking up late this year.

The company has said it will open 70 to 80 stores this year. Where are you adding locations?

The majority of our stores are in states east of the Rocky Mountains, so all of our growth for this year will be there.

Will you open in new markets in the future?

We know we can have a total of 1,800 stores in the 48 continental United States. At some point in time we could go offshore, but that is years away. We look at where our lifestyle lives. It lives in Australia, New Zealand, rural England, Ireland. We believe we would prosper not just where there are a lot of people farming. A lot of people are farming in India, for example, but the average income is so low that it may not be a profitable venture for us. As opposed to going to the U.K., where there is recreational farming going on and income is fairly good.

2012 Expected to Be a Strong Year for Tractor Supply Co.