Mahindra USA, has announced that Mahindra Tractors will return as the primary associate partner with DJ Kennington and the #17 Dodge team in the NASCAR Canadian Tire Series for the 2013 season as they seek another series championship together. 2012 was a record setting year for both Kennington & Mahindra and both parties look forward to more of this kind of success. 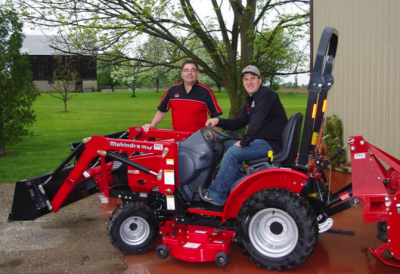 The partnership with Mahindra Tractors & DJ Kennington has grown significantly each year during their association. And once again this season the bond between both parties strengthens. Mahindra and the Canadian Dealers this year will provide Kennington with a new Mahindra Max 28 XL Tractor. As the driver and team principal Kennington knows how important this relationship is the team’s success.

“With our great partnership and continued support from Mahindra Tractors, that’s a big reason we’ve been able to have the kind of success we’ve achieved,” said Kennington. Mahindra is the #1 Selling tractor in the world and having a long-term relationship to take their brand to the next level is what I am most proud of. I am very pleased to have them return as a significant member of our team once again,” he added.

Cleo Franklin, Vice President of Marketing and Strategic Planning for Mahindra USA is equally enthusiastic about the prospects for this year, “Mahindra is proud to continue sponsoring Canada’s #1 NASACR driver - DJ Kennington for 6 years. We have been successful building the Mahindra brand in our strategically important Canada market as DJ is the perfect ambassador to promote Mahindra’s Rise philosophy of accepting no limits, alternative thinking and driving positive change in everything he does. We look forward to even more continued success with DJ as we look to both rewrite the record books.”

Kennington is especially proud of the type of company and brand Mahindra Tractors represents. “DJK Racing and Mahindra share common threads and values as I’ve had the pleasure of meeting all the folks in the organization over the last few years at company events. They are quality people who strive for excellence in their work, but also care about more than just selling tractors. Mahindra cares about making a difference in the lives of the customers and the communities they live in,” stated Kennington.

The 2013 race season began May 17th at Canadian Tire Motorsport Park near Bowmanville, ON, where Kennington began the defense of his championship. Fans are encouraged to keep up to date with the latest DJ Kennington team news all season. Race fans should bookmark the team website www.djkracing.ca and follow them on twitter, @djkracing and like the DJK Racing Fan Page on Facebook.