After more than two years in development, Exmark will offer its S-Series and X-Series walk-behind aerator models in 2014. The new models complement the 30-inch stand-on aerator Exmark introduced in 2013, giving landscape contractors a full range of commercial-grade options to handle virtually any aeration job. 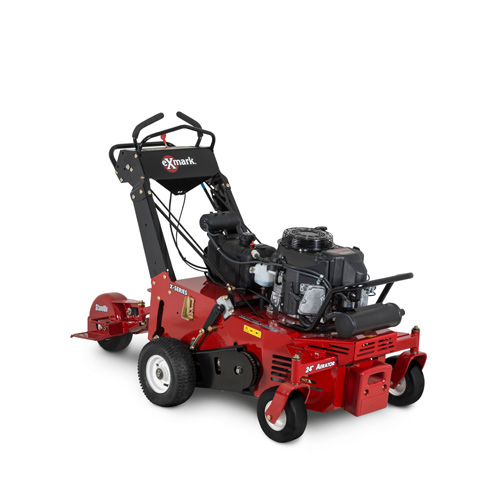 “These new walk-behind aerator models represent the culmination of an incredible amount of testing and refinement by the Exmark product team,” said Daryn Walters, director of marketing. “While we showed prototypes of the models earlier, we have waited until the designs were thoroughly tested, both in the lab and in the field, to deliver the performance, ease-of-use and long-term durability our customers expect.”

Exmark equipped the X-Series aerator with a 24-inch aeration width and steerable, dual-hydro drive design to increase productivity and reduce operator fatigue, particularly when paired with the optional pull-down sulky. With Kawasaki V-twin power, the X-Series is capable of aeration speeds of up to 6.5 mph to deliver productivity of up to 1.6 acres per hour.

The S-Series features a 21-inch aeration width and a robust transaxle drive system with variable drive speed and powered reverse. Powered by a rugged single-cylinder Kawasaki KAI engine, the S-Series is capable of speeds of up to 4 mph, allowing aeration of nearly an acre of turf per hour. The simple, easy-to-use design features straightforward controls for intuitive operation.

Both new walk-behind aerator models are designed to centralize weight over the tines to deliver maximum core depth from the heavy-duty, self-cleaning tines. For particularly tough or compacted soil conditions, the X-Series offers an optional weight kit, which allows the addition of up to 500 pounds of extra weight.

To learn more about the new Exmark walk-behind aerator models or locate a local Exmark dealer, visit Exmark.com or call (402) 223-6300.