Equipment manufacturers showed off their latest and greatest as well as their perennial best sellers to the record number of attendees for the 2014 GIE+Expo and Hardscape North America, held October 22-24 in Louisville, Ky.

Nearly 800 exhibitors, including more than 175 new exhibitors, were part of the event, the ninth largest trade show in the world.

Innovations in technology to improve fuel efficiency, serviceability and functionality were a highlight, along with the introduction of equipment for new segments. Several manufacturers emphasized their goals of being a “one stop shop” for dealers and customers.

The UTV market is one of these new segments and several manufacturers unveiled their introductory models.

The Rural Lifestyle Dealer team canvassed the 500,000 square feet of indoor space and the 19 acre outdoor demonstration area and here are highlights from the show. 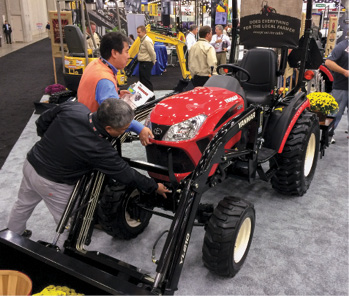 Yanmar America’s Business Development Manager Ben Housch said its new 424 multi-purpose compact tractor is designed specifically for properties that have a challenging terrain. The 424 has a 1,200 pound lift capacity and is outfitted with a larger tire package delivering increased ground clearance and more stability over uneven ground. 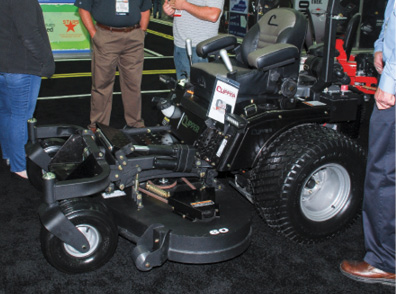 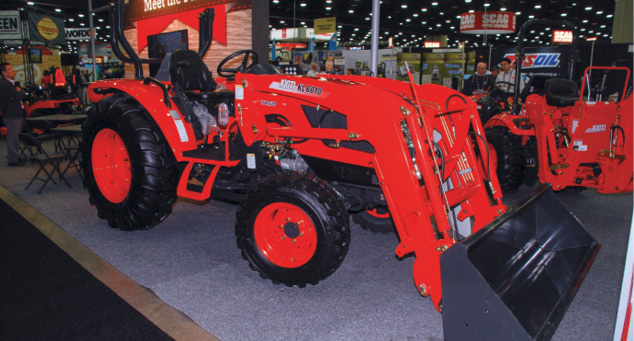 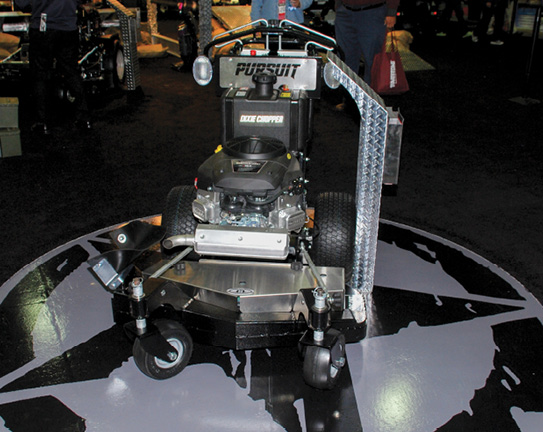 Dixie Chopper introduced its Pursuit walk-behind mower for commercial cutters. The mower features an 18 horsepower Briggs & Stratton engine; 32-inch, 36-inch and 44-inch decks; and single- or dual-drive models. It can reach speeds of up to 7 mph. The company also expanded its XCaliber zero-turn mower series with a new 60-inch deck and expanded the series’ engine options (Kawasaki, Kohler and Vanguard). “The Pursuit completes our portfolio and commercial cutters can have a trailer full of Dixie Chopper equipment to meet all their needs,” says Eli Kean, marketing manager. 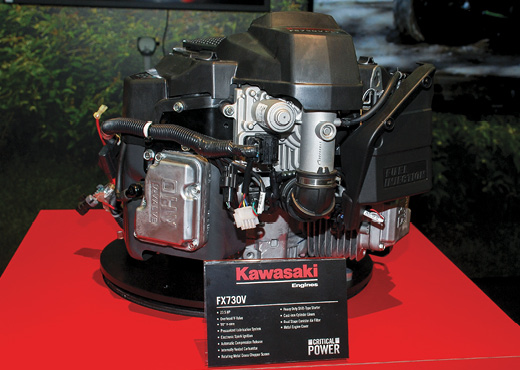 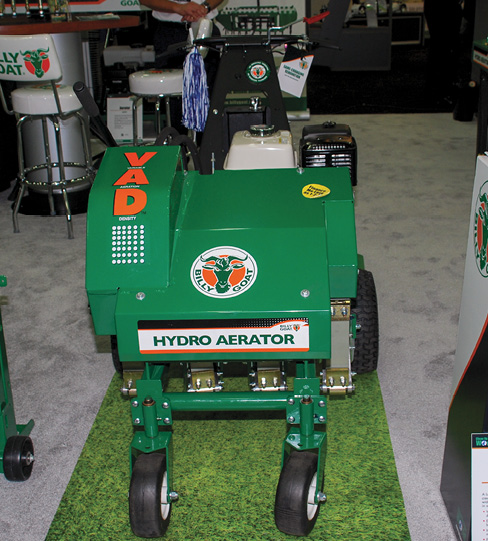 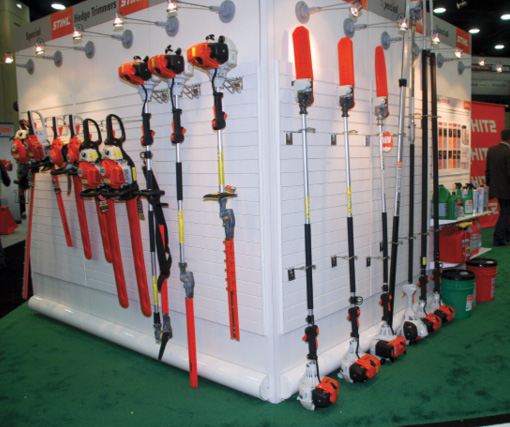 Stihl introduced three new products, the HLA 85 extended-reach hedge trimmer, the HTA 85 extended-reach pole pruner and the first lithium-ion powered cut-off machine, the TSA 230. The HLA 85 weighs 12.6 pounds and features a telescopic shaft that can adjust up to 10.5 feet, a 20-inch blade and a gearbox that can be folded completely for easy storage. The HTA 85 has a 12-foot telescopic shaft and an automatic chain-oiling feature that lubricates the guide bar and saw chain. The TSA 230 has zero-exhaust emissions and can operate up to 20 minutes without reducing power. All three of Stihl’s new products run on a 36 volt lithium-ion battery system. “We’re really excited about these lithium ion products and we’re going to continue pushing lithium ion further and further into the professional application,” says Daniel Pherson, product manager. 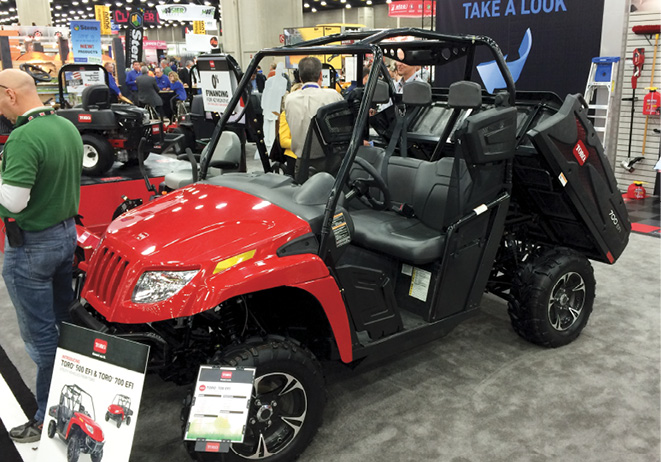 With a 1,000 pound box capacity and a 1,500 pound tow capacity, the new Toro utility vehicles are built for demanding jobs for contractors or around the farm and ranch. The 700 EFI is equipped with a 46 horsepower 4-stroke engine with EFI and offers 2 and 4 wheel drive options.

Toro also introduced its new TimeCutter SW series of zero-turn tractors, which feature a steering wheel with a tilting steering column as standard, an exclusive Toro engine, a heavy-duty front bumper made of cast iron and steel and a hitch. 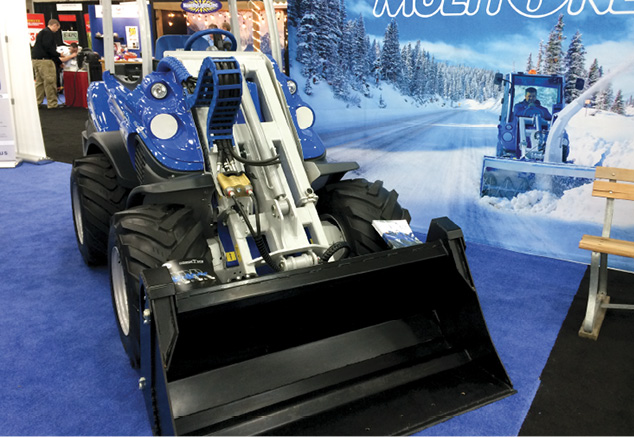 New to the U.S. market, MultiOne introduced its GT950 mini loader to the GIE+Expo. Vice president of sales Alessandro DeLuca says the GT950 offers over 170 attachments to handle jobs for ag, snow removal, landscaping, construction and more. It also has a lift capacity of 4,000 pounds and articulating design for ease of mobility in small, narrow spaces 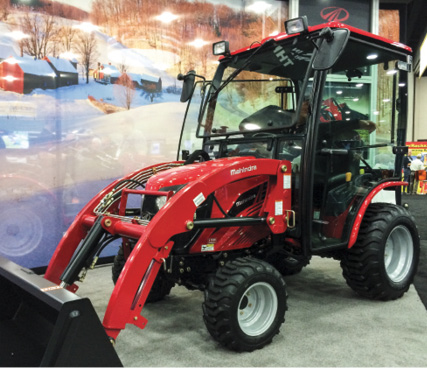 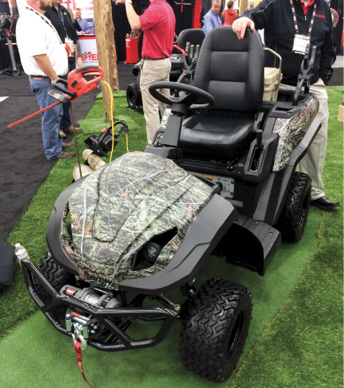 Denver Global’s Craig Rouse says its Raven MPV underwent extensive updates before being recently relaunched. Targeted at hobby farmers and large property owners, the MPV is a three-in-one mower, generator and transport vehicle capable of up to 17 mph. It’s equipped with a 46-inch cutting deck and has a tow capacity of up to 550 pounds. 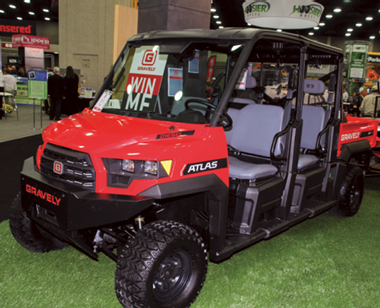 Gravely introduced the Atlas JSV utility vehicle, designed for heavy job site work. The utility vehicle features a 1,900 pound payload and 2,000 pounds of towing capacity. The Atlas is supported by an on-demand, true all-wheel drive system and De Dion rear suspension. It provides the heavy-duty traction and suspension required to maintain full ground clearance and a smooth ride when carrying maximum loads. “The JSV was designed specifically for the job site, everything from the front of the machine through to the capacity and payload. When designing, the question was always asked ‘Can this be used on the job site?’ ” says Bill Engler, director of commercial sales for Gravely. 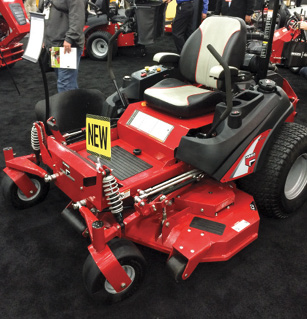 Replacing the 3100, the new 3200Z from Ferris cuts down considerably on the fittings and hoses of the earlier model offering less and easier maintenance for operators and dealers. Ferris’s Jennifer Loran said this is its top-of-the-line gas machine and comes in 61- and 72-inch cutting decks with 26-inch drive tires. It features a patented suspension system, Vanguard Big Block or Kawasaki FX engine, dual Hydro-Gear ZT 5400 Powertrain trans axels and Hercules II. Ferris also introduced the FW35CC wide area walk-behind with a Briggs & Stratton Vanguard 810cc, including one model with EFI, and new centralized control handles.