According to data compiled by Greg Peterson, known as Machinery Pete, the values of used garden tractors continued to rise over the past year, and he expects this trend to hold or move up slightly during the last quarter of 2015. 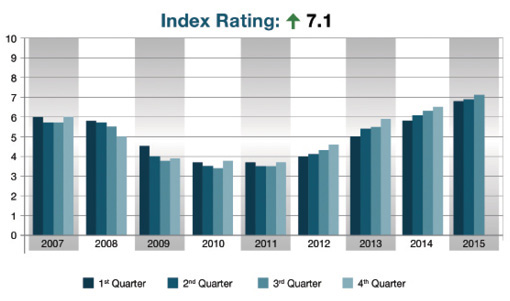 Since the first quarter of 2012, the value of used garden tractors has risen consistently. The trend is expected to continue in 2016. Source: Machinery Pete

According to data compiled by Greg Peterson, known as Machinery Pete, the values of used garden tractors continued to rise over the past year, and he expects this trend to hold or move up slightly during the last quarter of 2015.

On a scale of 1-10, Peterson reports that used sales values of garden tractors have a current index rating of 7.1. This is up from an index rating of 6.3 in the third quarter of 2014.

Commenting on the trend, Peterson says, “Higher auction sale prices were seen over summer months and into early fall. There was competitive bidding as consumer confidence in wider economy continues to grow.”

This category includes equipment with a mower deck and includes zero turns and commercial mowers.

“We’re seeing solid buyer demand coming in on the lower end of this horsepower range as the wider economy continues to improve and hobby farm buyers are feeling more bullish,” says Peterson.

Looking ahead, he adds, “This segment will hold. I think we’re likely to see more of the same in this segment. The increased number of machinery auctions factor is mitigated but increasing.”

Machinery Pete utilizes a network of 1,000 regional auctioneers, 600 ag lenders and 2,000 dealers in the U.S. and Canada. Since 1989, he has compiled more than 500,000 auction prices on used farm and construction equipment.

Dealers who derived 25% or more of sales revenues from the hobby farm/large property owner segment in 2015, reported excessive inventories of used equipment wasn’t a significant problem compared to those whose revenues from these segments are less than 25%.