Richard Morgan tried and failed to trade his 2000 Toyota in the federal government's "cash for clunkers" program, but on Saturday he got a deal from the state of Maryland that was almost as good. 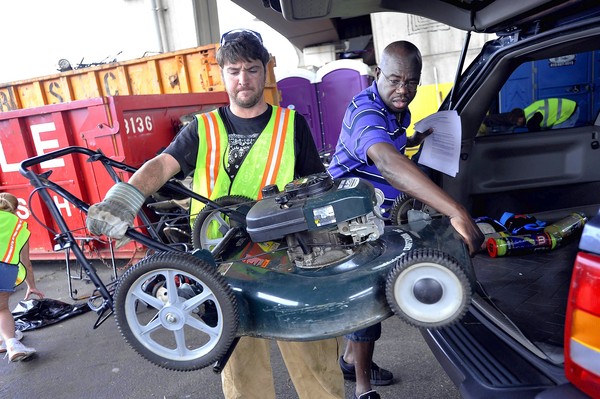 He dumped his gas-hog Honda power mower and replaced it with a brand-new, deeply discounted, battery-powered rig.

"Mowing your lawn is like driving from here to Pittsburgh," said the 51-year-old Columbia resident, citing a comparison that underscores the environmental damage caused by small gasoline engines.

Morgan and hundreds of other eco-spirited, economy-minded Marylanders jumped at the chance to take part in the Great Maryland Lawn Mower Exchange of 2010. Staged in a parking lot between Baltimore's downtown sports stadiums, the event was designed to spread the word that gas mowers pollute and to provide an economical way for some to make the switch to battery power. The Maryland Department of the Environment co-sponsored the event with Clean Air Partners, a nonprofit coalition of area governments.

Morgan, a cancer scientist at the National Institutes of Health, drove up in a Sienna minivan judged too fuel-efficient to qualify for the clunkers program, which was designed to improve air quality and stimulate the economy by replacing older vehicles with newer, more fuel-efficient ones.

"We've been trying to go green in general," he said, "and it was almost time for a new mower anyway."

Mowers with gasoline engines are unusually dirty machines, spewing harmful compounds into the atmosphere at a prodigious rate.

According to the U.S. Environmental Protection Agency, gas mowers produce 5 percent of all air pollution in the United States. Most grass-cutting takes place in the warmest months of the year, when air quality is often at its worst in places like the Mid-Atlantic region

Randy Mosier, head of the MDE's air-quality division, said he was impressed that some of the mowers that people were trading in had been purchased within the last two years and still looked new.

"They're doing it for the environmental reason, not just for the discount, which is impressing us," he said as workers tossed the gas-powered castoffs into bright-orange, industrial-sized storage bins from Baltimore Scrap Corp., which plans to shred and recycle the metal components.

The downtown Baltimore event was a promotional coup for Vermont-based Neuton Mowers in the traditional backyard of a much larger competitor, Black & Decker, which also markets a rechargeable mower.

In addition to cutting emissions, battery-powered motors also reduce noise pollution. When the blade of the Neuton "smart mower" is spinning, it sounds about as loud as a small vacuum cleaner.

Mosier said the state has run three previous gas-mower trade-in promotions, starting in 1995, but this weekend's was the most successful by far. More than 900 people, responding to an ad campaign on TV and online, signed up in advance to qualify for the discount.

A total of 1,110 new lime-green colored Neuton mowers were available for purchase at roughly one-third the regular price of $400 and $500.

Keith Lamirande, 43, of Silver Spring carpooled in his Mercury SUV hybrid with a neighbor so each could dispose of an old gas mower. The men said their families already participate in community efforts to help the environment, such as reducing runoff into the Chesapeake Bay by putting rain barrels on downspouts and planting rain gardens in their yards.

Lamirande, an administrator with the U.S. Department of Health and Human Services, said he'd been considering battery-powered mowers for some time but found them "a little bit pricey." The hefty discount provided by the state, he said, was an offer he "couldn't pass up."

By late morning, a line of cars, trucks and vans, from petroleum-sipping Priuses to guzzling Silverados, had deposited a pile of old mowers: Yardmasters, Snappers, Weed Eaters, John Deeres, Craftsmen and other gas-powered models. Participants in the swap program, which cost the state $185,000, had to be Maryland residents, but there was no requirement that the old mowers still worked.

Carol Ann Aus, 43, a CareFirst business analyst, said the deal was "serendipitous," because she'd been ready to replace her 10-year-old push mower. She expects to recharge her new machine with solar panels she plans to install at her Finksburg home, though she'll still use a gas-powered riding mower to maintain most of her 3.5-acre plot.

The Neuton mower contains a Duracell battery that runs for up to an hour and takes between four and 14 hours to recharge using ordinary household current. Because the battery lifts out, a spare can be inserted to add mowing time while the first recharges.

The company says its products are particularly popular in environmentally conscious Southern California, which has long put a premium on reducing emissions from gasoline engines.

Gas-powered mowers are particularly harmful to air quality during the area's ozone season, which runs from May until early October, said Russ Ulrich of the Baltimore Metropolitan Council, which represents the region's elected officials and chartered the nonprofit Clean Air Partners with the Metropolitan Washington Council of Governments.

If people have to use gas-powered mowers, he said, the best time is "rather early in the morning," before the atmosphere heats up and ozone pollution worsens.