By Diana Dombrowski posted on April 17, 2017 | Posted in Dealership Marketing

The dealership is promoting Case IH and the dealership brand through promotional events this year with Nashville recording artist and songwriter Corey Farlow.

Farlow approached the dealership with the idea and the team at H&R Agri-Power thought the sponsorship would help them better connect with its customer base, which includes both the rural lifestyle market and production farmers. Stephanie McQueen, H&R’s marketing director, says that Farlow is from Elkton, Ky., not far from two of H&R Agri-Power’s locations, and he represents the company’s Christian values. “We are very familiar with him, and think that he is going to go places,” says McQueen. Farlow was named Best New Artist of the Year in 2016 by the Inspirational Country Music Assn.

H&R Agri-Power’s President Wayne Hunt says, "Corey has a large fan base that is growing by the day. We hope that through this partnership, we will grow our brand as well as his, and ultimately build the relationship and expand our business.”

Country music stars have long mentioned John Deere in their songs and the team at H&R Agri-Power hopes they can apply the same type of marketing strategy through a partnership with Farlow. McQueen says Farlow is working to incorporate the Case IH brand into some of his songs.

The partnership represents a new kind of marketing strategy for H&R Agri-Power and follows the lead of their manufacturers, like Kubota, who have partnered with country music recording artist Alan Jackson. “Ultimately, we’re trying to increase our brand awareness with Case IH so that we can sell more tractors,” says McQueen.

The partnership was announced in December 2016 and McQueen is hopeful Farlow’s career and the company’s brand will grow as his schedule fills up this summer.

H&R Agri-Power endorses Farlow with a financial contribution to help fuel his country music career and Farlow incorporates the company and its products into his work. “Corey’s working on trying to feature a lot of our equipment, our customers and our stores … even possibly in his music videos and his songs,” says McQueen. 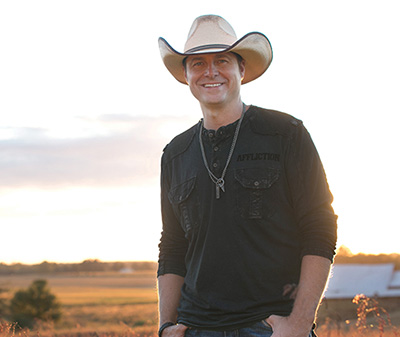 Both H&R Agri-Power and Farlow use social media to promote one another. Farlow uses the hashtag “#poweredbyHRAgripower” on his Twitter page and H&R Agri-Power shares photos of Farlow at its events on Facebook. Farlow recently performed at several of the dealership’s Customer Appreciation Pancake Days. “We’re trying to piggy-back off each other on social media and our websites and build each other up,” McQueen says.

Farlow will perform at company meetings and participate in other events where H&R Agri-Power is already present, like FFA conventions and county fairs. “We have several events throughout the year that we felt like being partnered with him may help us bring in some more people and also give him exposure as well,” says McQueen.

H&R Agri-Power’s equipment will be displayed at Farlow’s concerts along with banners promoting the company’s products and brand. Farlow will also wear H&R Agri-Power branded attire at his concerts, and there will be reps from the company present to speak with anyone interested in the products.

The partnership is yet another step for growth for H&R Agri-Power. The dealership was established with the merger of H&R Implement Co. and Agri-Power, both located in Hopkinsville, Ky., in 1993. The company opened a third location in 1994, but it was the acquisition of Bicket Equipment of Morganfield, Ky., in 2005 and Ford Richardson of Mayfield, Ky in 2006 that marked the beginning of significant growth.

In 2008, the dealership expanded outside of Kentucky with the acquisition of Vergennes Equipment in Illinois. After that, the company expanded into Tennessee in 2011, Alabama in 2012, and Mississippi in 2014. H&R Agri-Power’s most recent acquisition in 2015 expanded the company’s irrigation footprint, now supporting the Zimmatic brand at all of its locations. Diana Dombrowski is an editorial associate for the Lessiter Media Ag Division. She is a graduate student studying to get her master's in communication from Marquette University, where she also graduated with a bachelor's degree in communication studies.

How to Sell: Generating Sales for Generators