OPEI Issues Statement on Expansion of E15 Sales to Year-Round

Consumers are advised to ‘Protect Your Power’ by using only E10 or less in lawn mowers, hedge trimmers, generators, chainsaws, UTVs and other small engine products.

“We will continue to advise consumers and professional users of outdoor power equipment to ‘Protect Your Power’ as E15 gasoline sales expand to year-round across the country,” said Kris Kiser, OPEI President and CEO. “With E15 sales expanding to year-round, it’s more important than ever for consumers to educate themselves about fuel choices today and to pay attention to what fuels you put in your lawn mower, generator, chainsaw, trimmer, UTV or other small engine product.”

Most outdoor power equipment is not designed, built or warranted to run on fuel containing 15% ethanol. “It can damage or destroy equipment,” said Kiser. Consumers are advised to read their owners manuals for guidance on correctly fueling their outdoor power equipment products, but “should be generally aware that only fuels containing 10 percent or less ethanol should be used,” he said.

He added, “As the fuels marketplace has changed, you can no longer count on being able to put the same fuel in your mower that you also use in your car or truck.”

Along with boat, snowmobile, motorcycle, automobile and other manufacturers, OPEI has long advised and educated consumers about the changing fuels marketplace, with mid-level ethanol blends being introduced for a subset of the automobile fleet. Mid-level ethanol fuels are not for use in non-road products, such as mowers, chainsaws, generators, UTVs, ATVs, boats, snowmobiles, motorcycles, and other outdoor power equipment.

“It is unfortunate our government is not willing to invest in stronger education for consumers about fueling choices. The small warning stickers placed on fuel pumps are not enough to prevent mis-fueling and do little to educate consumers. Consumers need to be vigilant year round when it comes to fueling their outdoor power equipment and remember that E10 or less is always best,” said Kiser.

The organization recently issued the results of a new study conducted online with The Harris Poll that showed Americans are confused when it comes to fueling choices. OPEI's research found that a majority of Americans continue to pay the most attention to fuel prices at the pump, and some are paying for it with mis-fueling errors.

Roughly two thirds of Americans (68%) will use the least expensive grade of gasoline whenever possible (up from 63% in 2015), which is likely why just over half (52%) use the same fuel to fill up portable gas cans as they use to fill their vehicles. Only 1 in 5 Americans (20%) say they notice ethanol content at a fuel pump, while more than 4 times as many (86%) notice price (similar to last year, 20% and 85%, respectively). 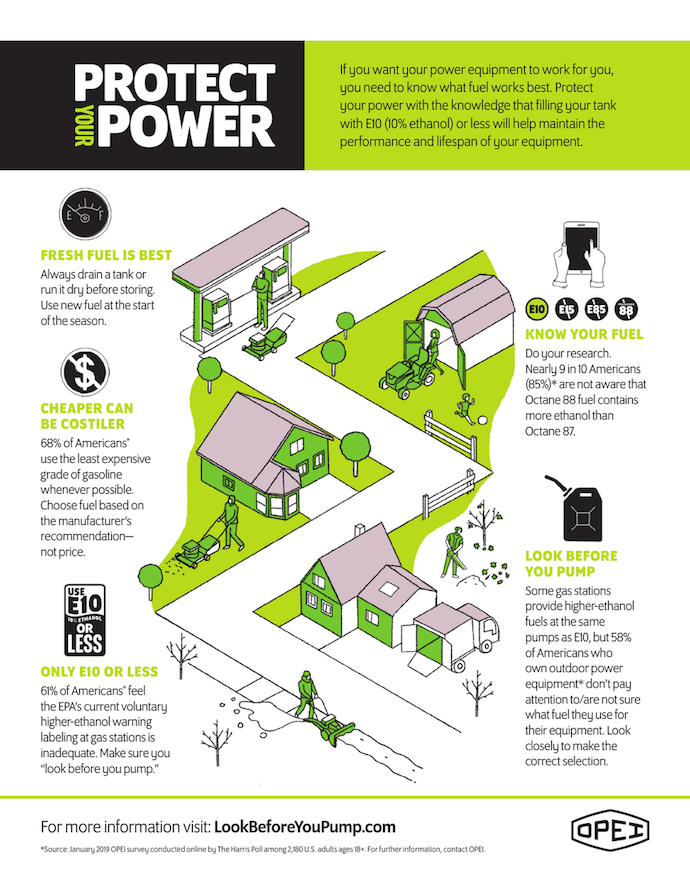