Keno Tractors, a single-store shortline dealership out of Keno, Ore., right on the northern border of California, carries several tractor lines, including Branson and Mahindra. But it’s the dealership’s line of Chinese-made Jinma tractors that has made the business what it is today.

One of only 2 Jinma dealers in the U.S., CEO and Founder Eric Nystrom sold his first piece of farm equipment, a Jinma tractor he imported and assembled himself, back in 2004. Last year, the dealership brought in $8 million in revenue.

Nystrom’s experience as a tractor dealer stems from one seemingly inconsequential moment: when he put his own personal Jinma tractor on the side of the road with a “for sale” sign on it.

“I was looking for a tractor to use on my 3 acres, but I didn’t want to spend $20,000 on it,” says Nystrom. “So I researched Chinese tractors and found they’re fairly basic with no added features, which was appealing to me. I bought one off a boat in Washington, assembled it in my garage, and I was really impressed with what I got for the money.

“Then I figured there must be other people looking for the same kind of tractor. So, I put it on the corner with a ‘For Sale’ sign on it, and it sold that same day. Then I bought another and did the same thing.”

Nystrom continued to buy individual Jinma tractors, assemble them and sell them on his street corner from then on until one day, to his confusion, he started getting phone calls from all across the country from people asking to buy Jinma tractors.

“Turns out my nephew, in order to graduate from college, had to build a functioning website for a business. So he had taken photos of my house and tractors and put them online,” Nystrom said. “From then on I was working two jobs and building tractors until 2 a.m. This went on until I finally decided that what I wanted to do was sell tractors. I bought a 10,000 square foot old grocery store, converted it into a dealership, and here we are.”

Nystrom says when he first began importing Jinma tractors, there were over a dozen other companies in the U.S. doing the same thing. Around 2015, however, when new EPA regulations on diesel engines were released, he says his competitors gave up their Jinma business, since the Chinese tractors wouldn’t pass Tier 4 requirements. Nystrom, however, took a different approach: swapping out the engines. 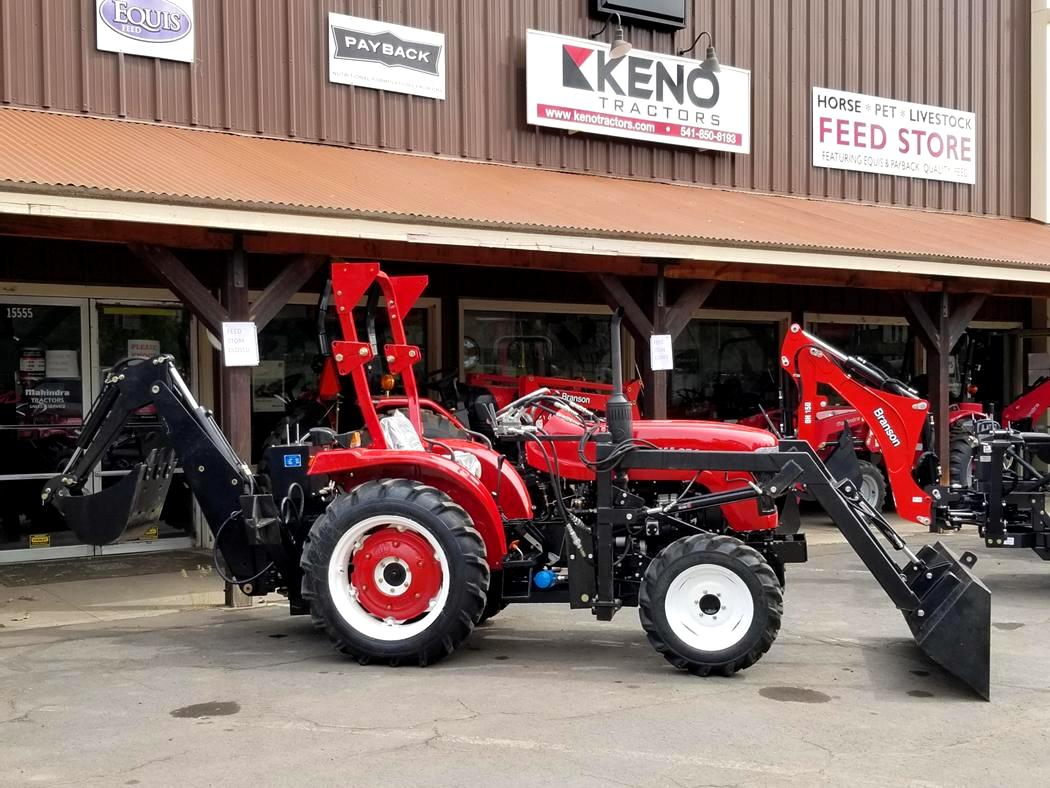 A used Jinma 254 with factory back oe and Branson front end loader sits outside Keno Tractors.

“I decided I was going to stay in this business,” he says. “They ended up buying Perkins engines in the UK and shipping them to China to swap them with the original engines — they had to ship complete tractors to me or pay an additional tax.

“The Perkins engine was a good fit because it was EPA certified and CARB (California Air Resources Board) compliant, and if you can sell a machine in California, you can sell them anywhere else in the U.S. and Canada.”

He says the Jinma 254, the manufacturer’s 25 horsepower tractor, is the model they’ve been swapping engines on since 2015, since the lower horsepower means emission requirements are less restrictive.

“Over the years, the 254 has made up probably 90% of our Jinma sales,” says Nystrom. “It’s for the average homeowner, it can accommodate a 5-foot roto-tiller or mower deck. Prior to 2015, we sold some of their 35 and 45 horsepower models, and there’s definitely still a population of them out there.”

Nystrom says about 7% of the company’s business is done in their county, with the remainder consisting of national and international sales. He says the company has sold Jinma tractors in Guatemala, El Salvador and Puerto Rico.

“What’s unique about these tractors is they have 1960s’ technology, which makes them easy to support remotely,” he says. “It’s essentially just turning wrenches. If a customer has a problem, we can just ship them the part they need, and they’re back in business.

“This is what makes our business model unique. We’re sales-oriented and internet-based, and in most cases when we sell a tractor, we never see it again. We’re more global than local.”

The company has two full-time parts employees, and a strong e-commerce business that allows customers to order Jinma parts, which Keno Tractors ships around the world.

“There’s a huge population of Jinma tractors out there that we didn’t sell, and there’s not a single one we haven’t been able to fix,” he says. “We even rebuild engines for Jinma tractor owners and ship them out.”

Nystrom says the dealership is currently facing challenges between elevated shipping costs and increased tariffs on Chinese products that they haven’t brought in Jinma tractors for some time.

“Jinma recently developed an updated version of the tractor we’ve been selling for years, the JM-284, and it has a hydrostatic transmission. But I’m hesitant to order some of those, and it’s because of the cost,” he says. “If I bring one in now, after the tariffs and the huge increase in shipping costs, I’d be selling it for more than our Branson and Mahindra tractors.

The dealership’s Jinma business dropped off in 2021 as a result of these issues, with most of the sales going to Mahindra and Branson tractors, which they also sell across the country. He says that the company’s business model is based around volume, which allows them to price their tractors lower and grab business in other parts of the country.

As one of the few Jinma dealers in the U.S., Nystrom says he’s formed a close connection with the people at Jinma. He travels there frequently to discuss his business with the manufacturer’s executives, at least 1-2 times a year outside the pandemic.

Nystrom says Keno Tractors had set up other Jinma dealers in the past, mostly “mom and pop” style shops that he would supply with wholegoods and parts, but the arrival of Tier 4 regulations and the need to swap the engine killed the dealer program. There were also issues, he says, with dealerships that already had OEM tractor lines selling against the Jinma models.

“It turned out to be more of a detriment than a help, because these dealerships would essentially sell against Jinma,” he says. “They would bad-mouth them to promote their own product.”

Nystrom says traditional dealerships may have trouble shifting to the business model required to sell Jinma tractors, and that a potential Jinma dealer will need to be willing to put in the work on assembling the tractors themselves. “We put 8-10 hours into assembling every tractor,” he says.

For anyone looking at importing Chinese tractors, Nystrom says the key is to find the right customer, usually homeowners that will only spend a few hours a year on it.

“If I’ve got a contractor looking to buy some tractors, I’ll direct him to a Mahindra or a Branson that has better warranty and low-interest financing,” he says. “A Jinma has to be the right tool for the right person.