By Mike Lessiter posted on August 29, 2011 | Posted in Manufacturer News

Unlike farmers, the rural consumer usually showed up on weekends and often didn't know what their options were when it came to equipment. Oftentimes, they knew only that they were planning to put in a garden and wanted to stir up the ground. Used to the instant gratification most purchases provided, these consumers often arrived ready to buy, and wanted to take the equipment home that same day.

As the rural landscape continues to change, this mission is as valid in 2011 as it was then. Below, in this article from 2007 we take a look at some of the most important things to pay attention to in order to win the business of the rural consumer: advertising (they're probably not reading the state farm paper) and store hours (since most will have day jobs, they'll doing most of the work on the weekends).

What hours are you open? As chain stores have moved into your area, have you switched to Sunday hours to compete? 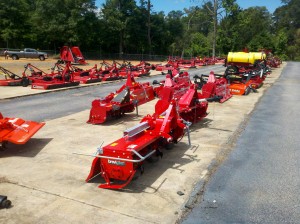 A clean, well-organized equipment lot with new machines ready for quick delivery is key to attacting the business of the rural consumer.

Getting these the attention of hobby farmers and rural lifestylers is the first step in establishing the relationship that leads to sales.

One thing that dealers have in their favor is that these buyers chose the lifestyle to fulfill a dream of "acting like farmers." Thus, they also want to do business like farmers, leading them to the local dealership.

Courtney puts his advertising dollars for this part of the business into highway billboards in specific areas of growth potential, horse publications and community magazines that advertise rural real estate.

According to Lush, appearance counts with this segment. "We need to have the product on hand, well displayed, clean and shiny and then we work to gain their trust. We don't automatically have their trust, simply because we earned it over the years in the farm trade," he says. Like Lush, Alain Lefrancois, Garage J.L.Lefrancois, Inc., St. Remi, Quebec, is using his showroom and lot to show the breadth of choices that the buyer can use. "One thing we are doing to cater more to this market is keeping more units on display and showing them with different attachments, such as front end loaders, backhoes, snowblowers, cabs and mowers," he says.

The biggest thing to show the commitment to this group, according to dealers like Parker, is store hours. If these buyers aren't able to drop by the store after their weekday jobs, they need Saturday morning to prepare for their weekend "hobby.' "Convenience is the name of the game, being open when you aren't supposed to be," says Parker. "It's a competitive market, and if we aren't convenient enough, they'll just go somewhere that is."

Keiran's operation differentiated itself from the competition years ago by offering all-day Saturday hours. "At the time, it was done for the farmer's needs for emergency service," he explains. "Since service was open, we kept all departments open." He says the extended hours worked out extremely well for the hobby farmers with weekday jobs. While not in favor of Sunday hours, he is contemplating expanding in-season hours of operation to accommodate these people and to make the service department more accessible to them.

While Courtney's operation is like many in that it is open until noon on Saturdays (though many are examining going full-day Saturdays this year), he says one dealer in his area stays open until 9 p.m., Monday through Saturday, and sees good results from its hobby farmer clientele.

"There's no secret formula for success with the hobby farmer segment," says Keiran, who estimates the hobby farmer represents 50-60% of his total business. "We're honest, we don't push customers to make a purchase decision and we've created an environment in which people feel safe and welcome. As an example, it is cool to see people looking around and taking pictures of children on tractors."

Getting Extra Hours in the Work Week

How to Let Employees Speak Their Minds Without Disrupting the Workplace