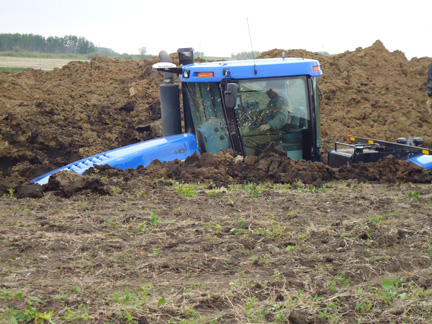 Winner in the "Best Stuck Tractor" category was this entry from Dan Vanbeselaere, Waskada, Man. 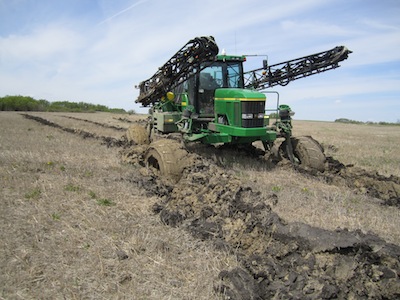 Evan Sauer, Edenwold, Sask., winter of the "Most Comical" category, is now even more prepared - he has a tow rope to go along with that boat. 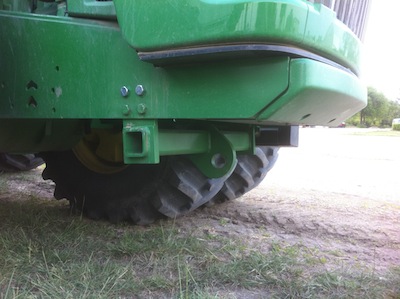 Inspired by the muddy conditions, this tow bar was developed by a local farmer and is now available through Flaman. 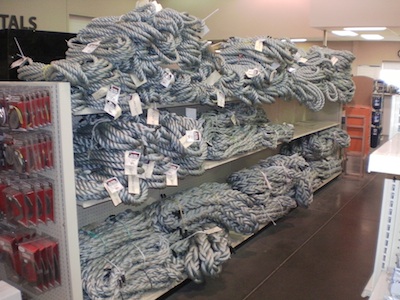 Tow ropes and straps take up an entire aisle at Flaman's Saskatoon dealership.

The rise of social media in the rural community has given equipment dealers a new way to reach out to customers.

The Flaman Group of Companies, with nine dealerships in Alberta, Manitoba and Saskatchewan, has created an interactive and dynamic web resource for farmers in need of advice for farming in muddy conditions. What started as a simple idea spawned a plethora of photos of sunken farm equipment, and then blossomed into an online forum in which farmers can give and receive advice on how to remove their buried equipment.

"We call it Facebook for farmers - a place where they can share common experiences and have some fun," says Jennifer Thompson, Flaman marketing project manager.

Flaman's second year for the "Stuck in the Muck" photo contest once again makes light of an otherwise frustrating situation for farmers in Western Canada. After another year of heavy rainfall, there was no shortage of photos of well-entrenched farm equipment.

But instead of gawking at these phenomena, the online contest was a way to help. By awarding winners of the photo contest free tow-ropes (a 50 ft. model worth $469 Canadian), Flaman ensures the winners won't get stuck for long next year. The contest also inspired Flaman executives to create an online community for farmers to offer advice on how to remove their equipment from the mud in the most efficient way possible. Flaman makes it a point to facilitate advice and discussion on these forums.

The original goal for the "Stuck in the Muck" contest is to build community, and not necessarily to drive sales for the dealership. The web site dedicated to the contest is supported without banner ads. The company links to their official site, as a resource for removing stuck equipment. The recently redesigned official site, www.flaman.com includes photos of their major lines, Twister bins, Wheatheart augers, J & M grain carts, Wil-Rich tillage tools, and Schulte mowers, among others.

Though the contest didn't get as many entries as last year, "We're pleased with the success of this year's contest," Thompson says, noting there's been more than 50,000 visits to the contest's web site since it re-launched in May and over 155,300 visits since it was created a year ago.

"We had 358 people from Saskatchewan, Alberta and Manitoba submit 383 photos and over 1,200 people from across the world visited the site to vote for their favorite pictures," Thompson adds.

Not only has the web site spawned an online resource for farmers with stuck equipment, but it also inspired a new product, an attachable tow-bar invented by local farmer, Ryan Kahovec. "We supported him by putting his new piece up on our web site, we bought a bunch of them and put in our store for retail so farmers could get them here," says Steve Whittington, a member of Flaman's executive team.

The winning photos will be compiled into a 2012 calendar to be used as a fundraiser for local charities, a major focus for the dealership. It doesn't stop there, either. The format of the contest drew enough attention that Flaman joined forces with the Manitoba, Saskatchewan and Alberta sledding associations. The company used a similar format to create the "Sled'N Snap" photo contest, which provides similar advice to snowmobilers whose equipment is often lodged in snow. The dealership's trailer division has many snowmobiling customers, so it's a logical match-up.

Although the intent of the photo contest wasn't focused on increasing sales, it raised the dealer's visibility in the marketplace. "Traffic on our mainline sites has increased by 300% in the last two years, and that's always going up because we're putting a lot of effort into our online content. Five percent of our traffic to the main site came directly from 'Stuck in the Muck,'" says Whittington.

The "Stuck in the Muck" online photo contest, along with "Sled'N Snap," are an example of how a dealership can use social media or a dedicated web site to benefit customers as well as the business.

How Has Your Community Given Back to the Community During the Coronavirus Crisis?