Dealership of the Year 2012

Mid-State Equipment: 2012 Dealership of the Year

Dealership of the
Year Video Series

Mid-State has seven locations in southern Wisconsin, including a separate rural lifestyle store in Janesville. Bryan Hanson and Chris Frodel, a brother-and-sister team, are the second-generation owners who defined the approach for winning rural lifestyle customers.

"We drill down and focus attention on those people who are important to our success," says Frodel, vice president. 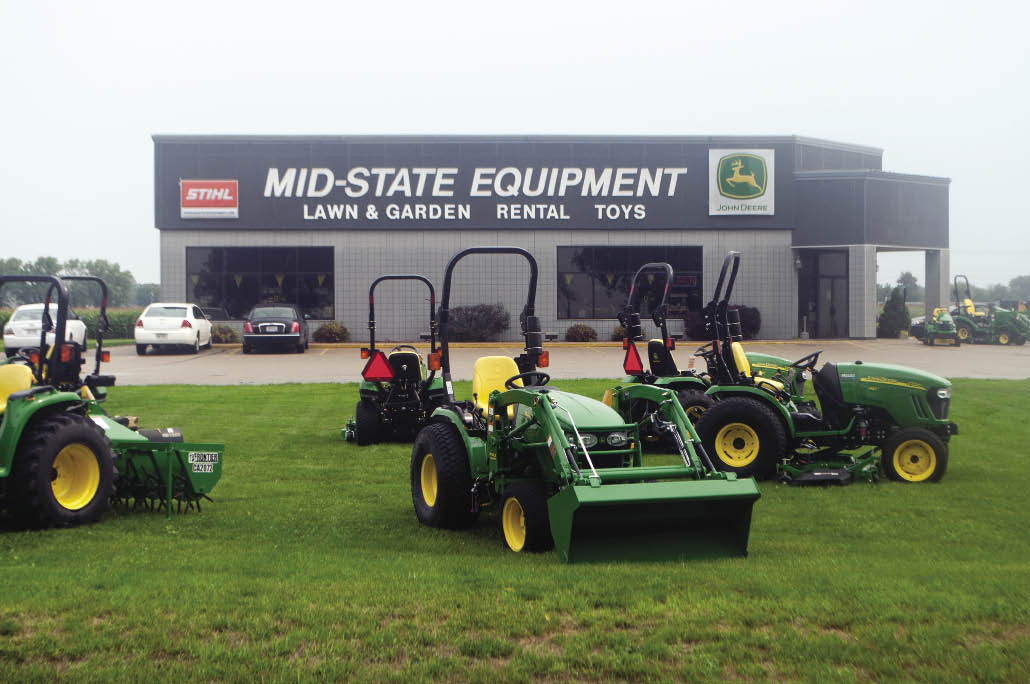 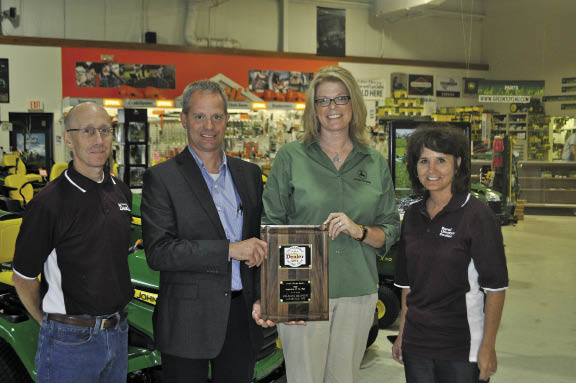 "Our staff doesn't have to prioritize their focus," adds Hanson, president. "I'm not a big believer in a salesperson having to learn everything from a weed trimmer up to a forage chopper. It's too much to ask of them."

The Janesville rural lifestyle store opened in 2000, but the dealership group is now in its 38th year in business.

Mid-State's beginnings were similar to many other dealerships. It was a single-store operation focused on ag customers. Curt and Linda Hanson, Hanson and Frodel's parents, began the operation in 1974 in Columbus, Wis. Prior to owning the dealership, Curt Hanson had been a John Deere territory manager.

"They broke ground in the middle of a field," says Hanson. The area offered a diverse farm customer base: dairy, beef, cash grain and vegetable producers as well as custom operators.

In 1990, the dealership had its first expansion when it purchased an existing dealership in Watertown. They expanded again in Hartford in 1998, later closing that store and opening a new store in Jackson. They acquired a dealership in Sauk Prairie in 2003, added another store in Columbus in 2008 and earlier this year acquired the location in Salem. However, it was the acquisition in 2000 of the Janesville location that positioned their future success serving rural lifestylers. The location offered opportunities to serve the outlying areas of Janesville and the larger cities of Madison and Milwaukee.

"We listened to customers and asked what they thought. This important group was telling us the store wasn't convenient," says Frodel. Rural lifestylers were unhappy about having to drive into town. The facility didn't have the space to allow easy access for commercial customers with trailers. And, the ag facility on the edge of town needed remodeling.

"Even if we remodeled and did an addition, there wasn't enough space," says Hanson. But, they did have space in a parcel just east of the ag store.

"It was natural to split off and there was enough business to justify it," he says.

The decision falls in line with Hanson's "top three" for a successful dealership.

"First of all, you must have a good location; you have got to be accessible. You must have a nice facility. It has to be inviting and comfortable with clean, well-lit displays. And you must have inventory. People want to get in the seat," Hanson says.

Hanson and Frodel moved quickly. They acquired the Janesville dealership in March 2000 and by December, they opened the new 11,500 square-foot rural lifestyle store.

Mid-State knew they needed to create a retail experience that was unique for the rural lifestyle customer.

"We knew we needed a nice, welcoming showroom that could accommodate rental and the offering of lawn and garden. We needed room up front with the ability to expand the shop if need be," she says.

The showroom features 25-foot ceilings, windows on three sides, and a center display area featuring popular equipment like Gator utility vehicles and lawn tractors and a collection of John Deere merchandise. Point-of-purchase displays call out specials and new products. An open path through the retail space leads to the power tools area, rental and parts counters, and service center. Before making their way through the store, customers are greeted by Cindy Reilly, the administrative assistant, or by salespeople, Jenny Green or Larry Schlender.

"I know we can't have 100% customer satisfaction, but that is our goal. Every customer is important ..."

Green and Schlender split duties to make sure every segment of the market is covered.

"Larry is on the road 50% of his time calling on contractors, commercial fleet owners, municipalities and government agencies, and doing demos. Jenny is responsible for in-store traffic," Frodel says.

Hanson and Frodel work to establish a company culture built on the motto, "You Can Count on Us."

"It's putting the customer first and doing the simple stuff. When people walk in the door, you acknowledge them and try to make them feel welcome. It's crucial that people feel welcome and are being helped. We let them know they are appreciated for their business," Frodel says.

For instance, after a sale is made, Green or Schlender introduces the customer to the service manager and the parts manager.

"I know we can't have 100% customer satisfaction, but that is our goal. Every customer is important," Hanson says.

That "every customer" mentality led to Mid-State's additional offerings for the rural lifestyle market - rental and mobile service.

"We always rented equipment to farmers and customers who were ag-related. We found that some products crossed over to homeowners and smaller contractors," says Hanson.

"It brings a different customer in the door. It brings in the weekender that isn't going to own right now, and it has resulted in future purchases," Frodel says. They regularly evaluate whether the rental division makes sense for the dealership.

"We run the numbers each month. We make ourselves prove it all the time," she says.

They also watch for ways to grow the rental business. Managers at each store keep a log of equipment requests.

The decision to offer mobile service for rural lifestylers was also based on what the dealership offered its ag and large commercial customers, whose equipment is either too large or too numerous to transport. 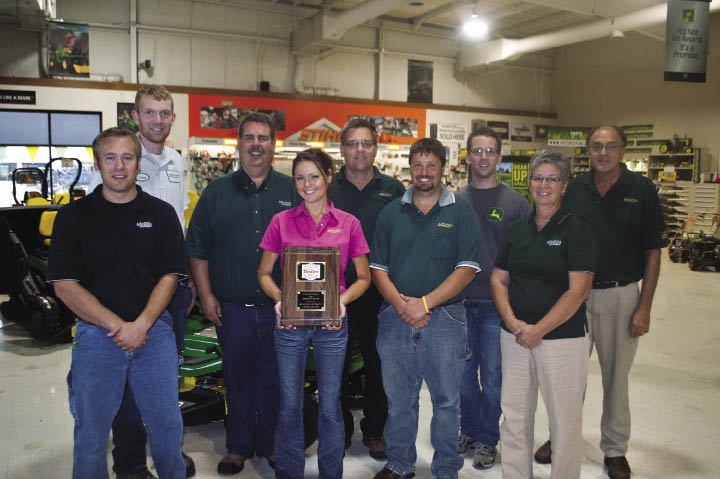 "Could we do this for a residential person with two pieces of equipment, like a Gator and a tractor?" Hanson says. It also fit with John Deere's "Ready to Mow" online service scheduling program.

The mobile service operates mainly in spring and fall, helping ready equipment for mowing and snow season. It's not a repair service, however.

"We ask a lot of questions on the front end. We have to confirm that this is for a basic inspection because it is more difficult to do diagnostics and those repairs in the field," Frodel says.

They charge slightly more for mobile service than for the customer who brings equipment in. It's worth it for many customers who prefer to have basic service done on their properties, Hanson says.

"We drill down and
focus attention on
those people who
are important to our success ..."

"We've always looked at the numbers. Our dad ingrained that in us. We study the financials and dad still does to this day," says Frodel. They've used PFW's business information systems since the 1980s. They began taking more of a planned approach with budget-setting about three years ago.

"One thing we all do at the beginning of the year is develop a budget by location and by department. We monitor the budget monthly and grade ourselves against the budget. When numbers dip, we look at ways to improve and compare it to last year's performance," says Frodel.

"We make short-term decisions based on what we see happening. We review certain criteria and see if we're meeting set goals, and, if we're not, discuss what we have to do to get there," Hanson says.

They review such criteria as revenue per employee, revenue by department and inventory turns. The sales team has its own weekly meetings and Frodel meets monthly with the dealership's full-time marketing and advertising coordinator. The dedicated marketing person has helped with workload, consistency and ongoing branding.

Would you like 90 potential female buyers in your dealership? Invite them to an event just for women, where they can demo equipment and ask ques- tions. And, don't forget the fun. That's the formula for Mid-State Equipment's popular Ladies' Night. The dealership has seven locations in southern Wisconsin, including a stand-alone rural lifestyle store in Janesville, Wis. It is Rural Lifestyle Dealer's 2012 Dealership of the Year.

"I was ecstatic about getting 90 people here on a Thursday night. It got people in our facility to see everything we have to offer," says Chris Frodel, Mid-State's vice president. She estimates about 80% of the women had never been in the dealership before.

Mid-State partnered with local busi- nesses for workshops and prizes for the event. The spring 2011 event had four rotations of 25 minutes each. The local nursery talked about spring plant- ing ideas. The local food cooperative shared the benefits of eating organic foods. Mid-State's service department talked about mower maintenance. The most popular rotation was the test driving of Scag zero-turn-radius mowers around the lot.

"We signed up people for service that night and that service business turned into a trade-in," says Frodel. She can track at least a compact tractor and Gator sale back to the event. They fol- lowed it up by inviting the women back for the dealership's open house.

This year, Mid-State is having its Ladies' Night in the fall to promote win- terizing summer equipment and preparing other equipment for winter service.

"People are already asking me, 'When are you going to have it?'" says Frodel.

Bryan Hanson, Mid-State president, says the event is about brand aware- ness and giving people a reason to come into the dealership to see the new equipment and retail offerings.

"If they come back in and buy a 'onesie' for a grandbaby or a battery powered Gator for their two- or three-year-old or come in for toys, that's another time they are in the store. They get a little more familiar and find different things in the store."

"It's a constant re-marketing of ourselves every year. People who come in for the first time often say, 'I thought you were just a tractor store,'" Frodel says. "It's a constant reminder that we have to keep our name out there and really market ourselves."

The marketing tactics are often coordinated with John Deere promotions and the dealership has had particular success with special events. (See "Special Event Wins Female Lifestylers" to the right.)

Mid-State's newest store in Salem further expands its rural lifestyle presence. The store will serve customers in the southeast corner of the state, including those from the Chicago area, many of whom own properties in Wisconsin.

Both Hanson and Frodel say the dealership is in a good position for more acquisitions. However, Hanson says growth doesn't always have to come from new customers.

"The best way to sell more equipment is to sell to people who are already customers. That first apprehension of dealing with somebody new ... that's all in the past," he says.

The customer is already familiar with the dealership and the salesperson. The salesperson already understands the customer's needs, making follow-on sales easier.

Other areas for growth include attachments and UTVs. Frodel says UTVs are popular across the segments: ag customers, rural lifestylers, hunters, construction contractors and others. Compact tractors also continue to offer opportunities.

"The whole gamut of horsepower and the versatility of attachments are astounding," says Hanson. "While it's a growing market, it's also a challenge because it's saturated with so many players in compact tractors. It's important that John Deere keep delivering innovative, quality products that we are proud to promote. We'll do our part in offering an outstanding customer experience."