Golf is a Different Game for Dealers

By Dave Kanicki posted on June 14, 2013 | Posted in Manufacturer News 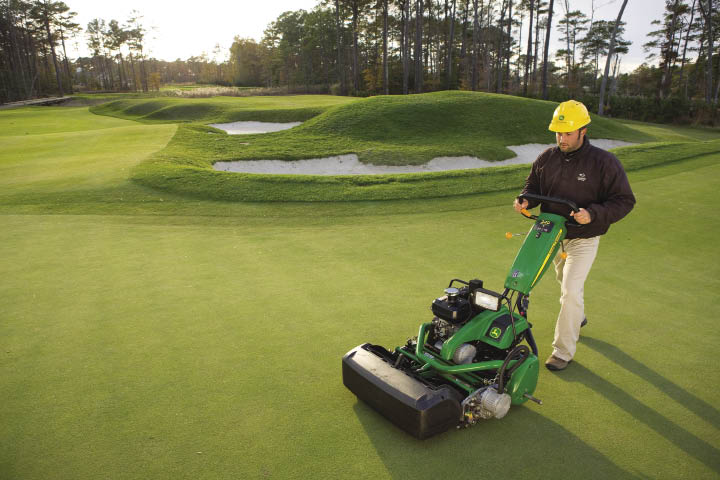 This isn't a market that equipment dealers just "jump" into. It takes focused marketing efforts and an "insider's" connection to gain a foothold.

With more than 13,000 active golf courses in the U.S., the market for specialized grounds maintenance equipment can be lucrative. It can also be as fickle as the consumer market segment that's highly dependent on discretionary income. It's not a market that a dealership can dabble in, says Scott Martinez, commercial products sales manager for Arizona Machinery. "You've got to jump in with both feet."

But even if a dealer puts both feet, his legs and back into the effort, this market just isn't for everyone, says Jeff Hedge of Birkey's Farm Stores. This dealership group operates 11 Case IH ag equipment dealerships and four Case construction equipment locations throughout central and northern Illinois.

According to Hedge, Jacobsen, one of the three major manufacturers of golf course maintenance equipment, approached Birkey's about representing them throughout the dealership's sales territory. "At the time, we thought it might be a good addition for us. They offered us a pretty good territory that overlapped our Case territory. There weren't a lot of strings attached and it didn't require a lot of commitment on the front side to get involved. So it looked like a pretty decent opportunity," says Hedge.

Golf Courses in the U.S.

According to a physical count of the golf courses listed in golf.com, there are nearly 13,250 active golf courses in the U.S. Of these, approximately 27% are private courses that are reserved for members only. The remaining 73% are open to the public.

Industry Q&A: How Wells Fargo is Changing How it Supports Dealers