Mark Altemeier of Maineville, Ohio, combined the experience of growing up on a farm with his mechanical expertise to invent a new way to get more done on his 25-acre produce farm. 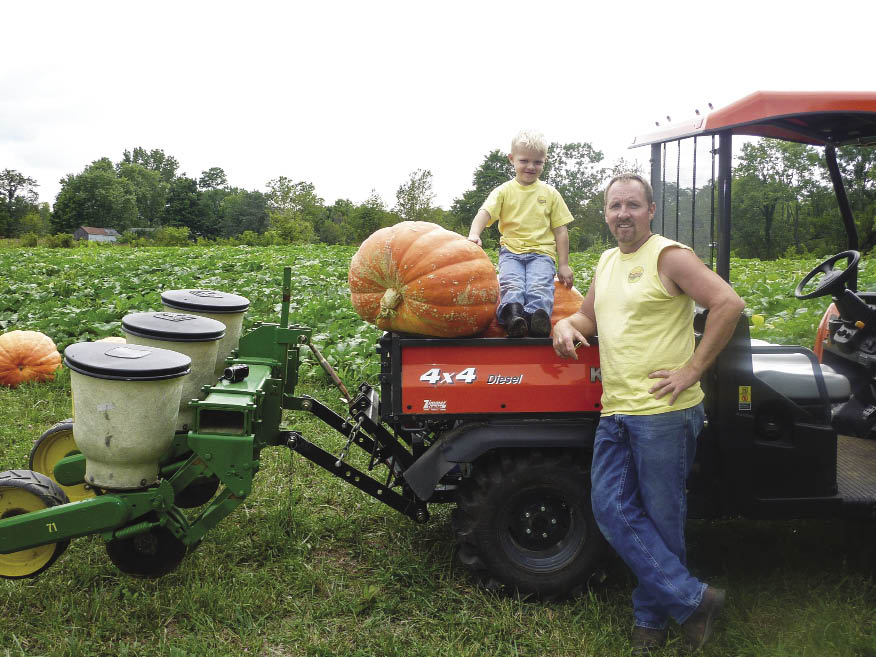 Mark Altemeier, shown here with his son, Dylan, of Maineville, Ohio, invented "The Farmboy," a 3-point hitch system for UTVs. The system was originally built for Kubota utility vehicles and now fits models from 8 other manufacturers.

"I needed another tractor and in 2010 the economy wasn't so great. I couldn't afford to go out and buy one. I thought 'Wouldn't it be nice if I could plant sweet corn with my Kubota RTV?'" says Altemeier, who raises produce that he sells though his own retail operation, Foster's Farm Market. The answer was an invention that is now "The Farmboy," a 3-point hitch system that uses standard UTV front or rear hydraulics to power attachments.

Altemeier built his first hitch with parts from Tractor Supply and from a local steel supplier. He used knowledge gained from when he worked as a mechanical contractor and engineering specialist. "From working on a farm, you learn how heavy-duty equipment is made. It's a pretty simple system," he says. "I used that hitch for the whole summer."

His success made him think there might be an opportunity to build the product for others. Altemeier did online research to see what was already on the market and found nothing. Then, he went to work perfecting his invention. He built more versions of the hitch to fit other manufacturers' models. Altemeier says his local dealers supported him by letting him test models on their machines.

Altemeier introduced the hitch at the Farm Science Review in London, Ohio, in the fall of 2010. There, he met Peyton Green from Green and Sons of Mt. Sterling, Ohio.

"I walked past and saw he had a hitch on the back of an RTV. I'm a Kubota dealer and I thought it was a neat idea. I signed up with them and have been selling them since," Green says.

Altemeier says Green and Sons have been successful selling the hitch because of several reasons. "They keep the product in inventory so they are able to demo it on the lot. They also show videos of it being used in the showroom. When customers walk in, they say 'I didn't know you could do that,'" Altemeier says.

Dale McOsker, vice president of operations for UTV Hitchworks, offers this advice for dealers. "The biggest thing is to have it visible. It's like buying a tractor. You don't buy it out of a catalog. It needs to be where customers can see what all can be done with it. It gives them ideas and they fill in the rest."

The original invention has now led to a diverse product line. The hitch is available for UTV models from 9 manufacturers. The company also now sells hitch attachments, such as liquid applicators, pallet forks, planters, scarifiers, snow plows and more.

Altemeier doesn't yet have the endorsement of major manufacturers, but has talked with several of them throughout the hitch's product development. He earned his patent this past February.

He says product demand is coming from consumers and commercial customers, who see it in person or through YouTube videos and then call their dealers. "The hitch doesn't replace a tractor. It is designed to make the UTV you have more versatile," Altemeier says.

McOsker says the hitch can increase attachment sales. "Dealers already carry the implements for compact tractors. You are doubling your available market by adding this one product."