"John Deere is well on the road to another year of impressive performance after reporting record third-quarter results," said Samuel R. Allen, chairman and chief executive officer. Sales and income for the period were higher than in any prior third quarter, he pointed out. "Deere's success is a reflection of considerable strength in the farm sector, especially in North and South America. We also are making further progress executing our wide-ranging operating and marketing plans, which call for expanding our global market presence while keeping a close watch on costs and assets."

Deere's equipment operations reported operating profit of $1.443 billion for the quarter and $3.943 billion for nine months, compared with $1.127 billion and $3.347 billion last year. The improvement for both periods was due primarily to the impact of price realization and higher shipment volumes. Also affecting third-quarter results was an impairment charge for long-lived assets related to John Deere Water operations. In addition, nine-month results were impacted by increases in production costs, selling, administrative and general expenses and warranty costs, as well as the unfavorable effects of foreign exchange. Increased production costs were related primarily to higher manufacturing-overhead expenses, partially offset by lower raw-material costs. The higher manufacturing-overhead expenses were in support of growth, new products and engine-emission requirements.

Net income of the company's equipment operations was $846 million for the third quarter and $2.324 billion for the first nine months, compared with $678 million and $2.040 billion in 2012. The operating factors mentioned above, along with a higher effective tax rate and increased interest expense, affected both quarterly and year-to-date results.

Financial services reported net income attributable to Deere & Company of $150.0 million for the quarter and $407.9 million for nine months compared with $110.4 million and $338.6 million last year. Results for both periods were aided by growth in the credit portfolio and improved crop insurance margins. These factors were partially offset by an increased provision for credit losses in the quarter and by higher selling, administrative and general expenses for the year to date. Last year's nine-month results also benefited from revenue related to wind energy credits.

According to Allen, Deere is poised for a very successful 2013. "Last year's fourth-quarter sales were particularly strong, in part because our factories were running at a high rate to catch up with customer orders. Even with this difficult comparison, our financial guidance implies a healthy level of income for the coming quarter and a third consecutive year of record results."

Longer term, Allen said he remains quite optimistic about the company's prospects. "We continue to believe our investment in new products and capacity will allow Deere to be the provider of choice for a growing global customer base in the years ahead," he said. "In our view, broad trends based on a growing, more affluent, and increasingly mobile population have ample staying power and should help the company deliver substantial value to its customers, investors and other stakeholders in the future."

The following is disclosed on behalf of the company's financial services subsidiary, John Deere Capital Corporation (JDCC), in connection with the disclosure requirements applicable to its periodic issuance of debt securities in the public market.

Net income attributable to John Deere Capital Corporation was $124.7 million for the third quarter and $335.6 million year to date, compared with $98.5 million and $270.2 million for the respective periods last year. Results improved for both periods due primarily to growth in the credit portfolio. Nine-month results were also impacted by higher selling, administrative and general expenses.

Safe Harbor Statement under the Private Securities Litigation Reform Act of 1995: Statements under "Company Outlook & Summary," "Market Conditions & Outlook," and other forward-looking statements herein that relate to future events, expectations, trends and operating periods involve certain factors that are subject to change, and important risks and uncertainties that could cause actual results to differ materially. Some of these risks and uncertainties could affect particular lines of business, while others could affect all of the company's businesses.

The company's agricultural equipment business is subject to a number of uncertainties including the many interrelated factors that affect farmers' confidence. These factors include worldwide economic conditions, demand for agricultural products, world grain stocks, weather conditions (including its effects on timely planting and harvesting), soil conditions (including low subsoil moisture from recent drought conditions), harvest yields, prices for commodities and livestock, crop and livestock production expenses, availability of transport for crops, the growth of non-food uses for some crops (including ethanol and biodiesel production), real estate values, available acreage for farming, the land ownership policies of various governments, changes in government farm programs and policies (including those in Argentina, Brazil, China, the European Union, India, Russia and the U.S.), international reaction to such programs, changes in and effects of crop insurance programs, global trade agreements, animal diseases and their effects on poultry, beef and pork consumption and prices, crop pests and diseases, and the level of farm product exports (including concerns about genetically modified organisms).

Customer and company operations and results could be affected by changes in weather patterns (including the effects of drought conditions in parts of the U.S. and dryer than normal conditions in certain other markets); the political and social stability of the global markets in which the company operates; the effects of, or response to, terrorism and security threats; wars and other conflicts and the threat thereof; and the spread of major epidemics.

Significant changes in market liquidity conditions and any failure to comply with financial covenants in credit agreements could impact access to funding and funding costs, which could reduce the company's earnings and cash flows. Financial market conditions could also negatively impact customer access to capital for purchases of the company's products and customer confidence and purchase decisions; borrowing and repayment practices; and the number and size of customer loan delinquencies and defaults. A debt crisis, in Europe or elsewhere, could negatively impact currencies, global financial markets, social and political stability, funding sources and costs, asset and obligation values, customers, suppliers, and company operations and results. State debt crises also could negatively impact customers, suppliers, demand for equipment, and company operations and results. The company's investment management activities could be impaired by changes in the equity and bond markets, which would negatively affect earnings.

Additional factors that could materially affect the company's operations, access to capital, expenses and results include changes in and the impact of governmental trade, banking, monetary and fiscal policies, including financial regulatory reform and its effects on the consumer finance industry, derivatives, funding costs and other areas, and governmental programs, policies and tariffs in particular jurisdictions or for the benefit of certain industries or sectors (including protectionist and expropriation policies and trade and licensing restrictions that could disrupt international commerce); actions by the U.S. Federal Reserve Board and other central banks; actions by the U.S. Securities and Exchange Commission (SEC), the U.S. Commodity Futures Trading Commission and other financial regulators; actions by environmental, health and safety regulatory agencies, including those related to engine emissions (in particular Interim Tier 4/Stage IIIb and Final Tier 4/Stage IV non-road diesel emission requirements in the U.S. and European Union), carbon and other greenhouse gas emissions, noise and the risk of climate change; changes in labor regulations; changes to accounting standards; changes in tax rates, estimates, and regulations and company actions related thereto; compliance with U.S. and foreign laws when expanding to new markets; and actions by other regulatory bodies including changes in laws and regulations affecting the sectors in which the company operates. Customer and company operations and results also could be affected by changes to GPS radio frequency bands or their permitted uses.

Other factors that could materially affect results include production, design and technological innovations and difficulties, including capacity and supply constraints and prices; the availability and prices of strategically sourced materials, components and whole goods; delays or disruptions in the company's supply chain or the loss of liquidity by suppliers; the failure of suppliers to comply with laws, regulations and company policy pertaining to employment, human rights, health, safety, the environment and other ethical business practices; start-up of new plants and new products; the success of new product initiatives and customer acceptance of new products; changes in customer product preferences and sales mix whether as a result of changes in equipment design to meet government regulations or for other reasons; gaps or limitations in rural broadband coverage, capacity and speed needed to support technology solutions; oil and energy prices and supplies; the availability and cost of freight; actions of competitors in the various industries in which the company competes, particularly price discounting; dealer practices especially as to levels of new and used field inventories; labor relations; acquisitions and divestitures of businesses, the integration of new businesses; the implementation of organizational changes; difficulties related to the conversion and implementation of enterprise resource planning systems that disrupt business, negatively impact supply or distribution relationships or create higher than expected costs; security breaches and other disruptions to the company’s information technology infrastructure; changes in company declared dividends and common stock issuances and repurchases.

Company results are also affected by changes in the level and funding of employee retirement benefits, changes in market values of investment assets, the level of interest and discount rates, and compensation, retirement and mortality rates which impact retirement benefit costs, and significant changes in health care costs including those which may result from governmental action.

The liquidity and ongoing profitability of John Deere Capital Corporation and other credit subsidiaries depend largely on timely access to capital to meet future cash flow requirements and fund operations and the costs associated with engaging in diversified funding activities and to fund purchases of the company's products. If market uncertainty increases and general economic conditions worsen, funding could be unavailable or insufficient. Additionally, customer confidence levels may result in declines in credit applications and increases in delinquencies and default rates, which could materially impact write-offs and provisions for credit losses. The failure of reinsurers of the company's insurance business also could materially affect results.

The company's outlook is based upon assumptions relating to the factors described above, which are sometimes based upon estimates and data prepared by government agencies. Such estimates and data are often revised. The company, except as required by law, undertakes no obligation to update or revise its outlook, whether as a result of new developments or otherwise. Further information concerning the company and its businesses, including factors that potentially could materially affect the company's financial results, is included in the company's other filings with the SEC (including, but not limited to, the factors discussed in Item 1A. Risk Factors of the company's most recent annual report on Form 10-K and quarterly reports on Form 10-Q). 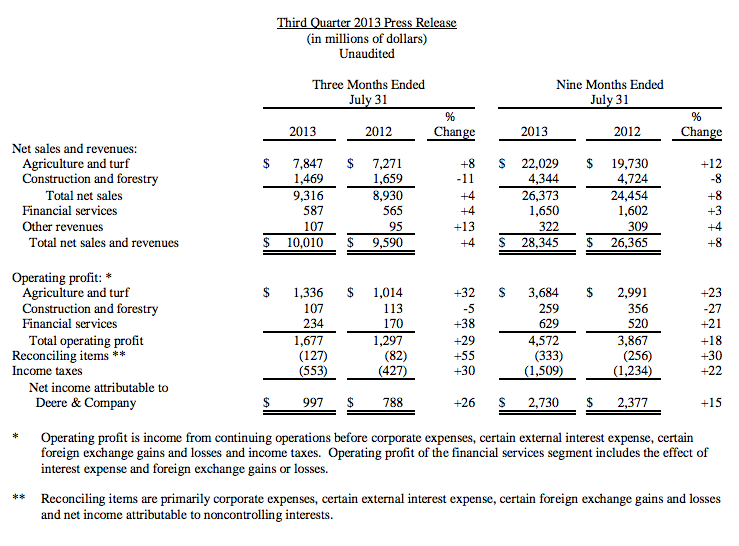