Steve Brown bought a dealership and within 3 years added 3 new lines and changed the dealership's market strategy and identity.

Video: Go to Browns Tractor & Turf’s new website to view a video of the dealership, www.brownstractor.com.

Steve Brown says he questions himself every day about his decision 3 years ago to buy an equipment dealership. His growing business is proving he made the right choice, especially the decision to reinvent the dealership for the rural lifestyle market.

“I walked away from a good job and early on I would think, ‘What did I get myself into?’ I had this burning thing to do something on my own,” says Brown. His personal drive and ability to select the right manufacturers are paying off for the newly named Browns Tractor & Turf, which is located on Main Street in Everson, Wash.

Since taking over what had been known as Everson Farm Equipment, Brown has added the Husqvarna, Kioti and Toro product lines. “Those 3 product lines mean that I can compete with anybody,” he says.

The proof is in the numbers: “We’re on pace to bring in double what we did the first year.” Early this summer, Brown had already exceeded his wholegoods sales for all of 2013.

He knew it would be a challenge to transition the dealership to the rural lifestyle segment and he had discussed the change with Everson’s owner, Marv Vanderheiden, whose father started the dealership in 1945. “Marv said 99% of the people I was going to sell to had never been in the store before, but he understood what I was trying to do and why,” Brown says.

Before becoming owner of the dealership, Brown’s career included positions as a parts manager for an auto dealership, selling industrial products and, most recently, working in the parts department for another area farm equipment dealership. A relative had worked at Everson and recommended Brown contact Vanderheiden. The two began talking in 2009, but the timing wasn’t quite right. The deal finally came together on July 4, 2011, with both Brown and Vanderheiden committed to the transition. “We would have done the deal even if it meant doing it on a napkin at the local café.

“I came over in September 2011 and worked with Marv for about 4 months and took over ownership on January 1, 2012. I got a feel for what was going on, got a ‘lay of the land.’ I had an idea of how I wanted to run things based on my previous experiences. Early on, the biggest lesson I learned was to figure out what I didn’t know. You don’t know what you don’t know,” Brown says. 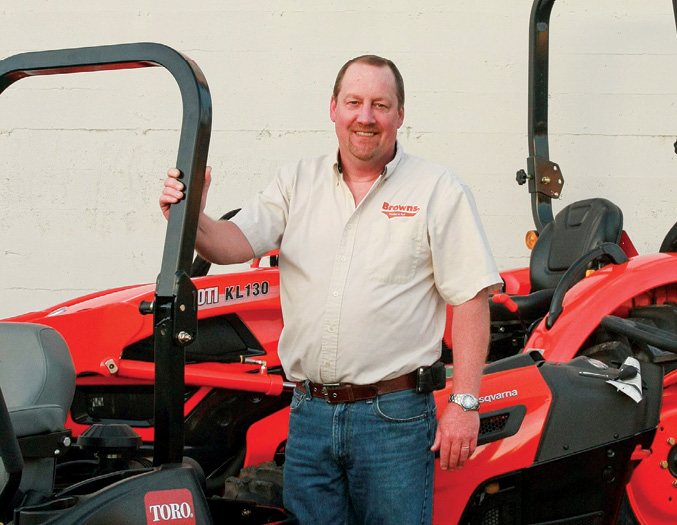 Steve Brown transitioned a farm equipment dealership into one focused on serving the rural lifestyle market. He says he can compete with anybody in the area with his product lineup, which includes Kioti, Husqvarna and Toro.

He turned to a group of experts to overcome the early challenges of owning a dealership, including a counselor with Western Washington Univ.’s small business program and a local attorney and accountant, both of whom came from recommendations. “I wouldn’t be here if it wasn’t for their help and for Marv,” he says.

The dealership had derived most of its income from repairing farm equipment and selling White and New Idea parts. “Our growth was not going to come from repairing old White tractors for the dairy farms. A lot of those farmers were quitting or retiring,” he says. And, as it turned out, AGCO didn’t renew the contract when he took over ownership. Brown knew he also had to prepare for when the service manager, who had worked at Everson’s for 35 years, retired. 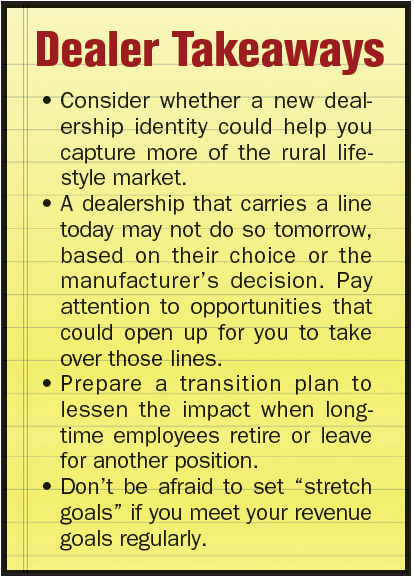 First up on his transition plan was to bring in Husqvarna equipment. “They were my first choice. I had the products at home and they had lost their local dealer. I thought it was a good choice because they had a lot of products under one umbrella, from riding mowers to hand-held products to push mowers. I could immediately have a lot of choices to offer people. Fortunately, they jumped on board and saw it was going to work for them, too.” He had products in his showroom within a month of signing on.

Brown originally had Bobcat in mind for his compact tractor line. However the company stopped selling compact tractors in the fall of 2012. He researched other brands, including reading dealer profiles in Rural Lifestyle Dealer and Farm Equipment magazines.

“I noticed that many dealerships carried the Kioti brands, so I started looking at it closer. I was already well established with GE Capital through Husqvarna, so I had no problems getting things set up with Kioti.”

He completed arrangements with Kioti in November 2013 and had inventory by late December. He says Kioti’s quality has appealed to his customers and several switched from other brands once they learned about the tractor line. “Kioti is strong on the east coast and is now growing its presence on the west coast. They have some good programs now and I’m selling the product for what it is, a good product for a good price.”

Last fall, Brown expanded his offerings again by adding Toro equipment. “In Lynden, Wash., there was a shop that sold Toro and had been in business for 50 years and they went out of business. Several of us applied and I was picked. It’s a strong product that’s established in the area, so I thought it could help drive growth. The biggest competition we have for commercial landscapers is a dealer that carries Exmark, Gravely and Stihl. But with our full-line of products from Husqvarna and Toro, I can compete with anybody. I think we’re really positioned well for growth.”

He may add smaller items next. “I may look into adding ‘mom and pop’ hardware stuff to help increase traffic, such as pruners, clippers and other items. But I told my guys that we wouldn’t add anything new this year and it’s late to add anything now.”

Brown needed to redo his showroom to accommodate displaying the new lines. This meant transforming the dealership’s layout, including taking out a false wall, while keeping the character of the older building, which used to be a post office. “There’s a spot in the floor where the post office counter was and you can stand where the employees stood.

“Before, two-thirds of the showroom was Marv’s antique tractors and other items that weren’t for sale. A lot of stuff had to go,” he says. The showroom area increased from about 300 square feet to about 900 square feet.

Brown says his Main Street location is a busy one, despite the fact that Everson has a population of less than 3,000. “For a small town like this, the 24-hour traffic count is surprisingly high, 11,000-14,000 cars.

“It’s like Mayberry. There’s a grain silo next door, but I really enjoy it. The small-town businesses really support each other and I bank right downtown,” he says.

Brown knew early on that changing the dealership’s name to Browns Tractor & Turf from Everson Farm Equipment was an important step in transitioning to the rural lifestyle market. “We felt the ‘farm and garden’ names were overused and started tossing some other ideas around. We wanted to let people know exactly what we were doing and make it easy to remember. 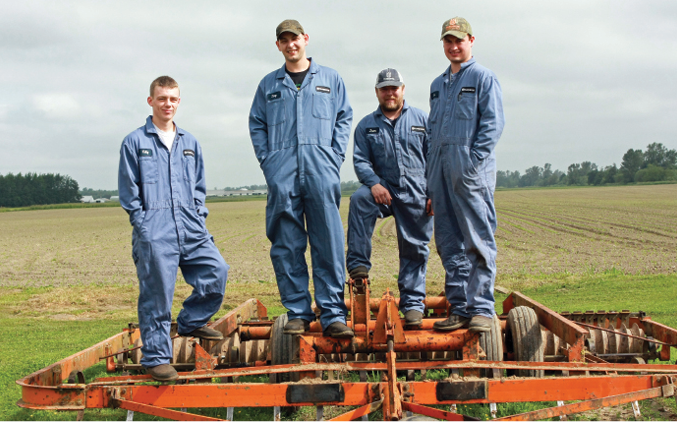 “As our business model changed, I felt it was important to get the farm equipment signs off the building. They hindered us from people knowing we had homeowner and consumer products,” Brown says. He also wanted to move away from identifying the store with the city’s name because he hopes to open other locations.

He publicized the change on his Facebook page and with newspaper ads. Through Husqvarna, they also promote the dealership during radio broadcasts of Seattle Mariner games. Brown did keep some of the dealership’s identity, though. “There’s a wood ‘Everson Farm Equipment’ sign that Marv’s wife made in the early 1970s that they used to display at the county fair. We found it in the warehouse and we cleaned it up. I want to keep some of the Everson heritage.”

The new identity also meant assembling a new team. The long-time service manager did move on about a year after Brown took over. The service team now includes Troy Stap, shop foreman, and three full-time service techs, Colby Bouma, Jason Klein and Jim Hoefakker. “Troy is a really dynamic, sharp young guy who earned his associate degree in diesel mechanics while still in high school,” Brown says. “He’s somebody that I’m planning on building around, who will help us move forward. I value his input and if I’m gone for 2 or 3 days, I can trust that everything is going to be OK.”

The dealership’s team also includes Mandi Hadeen and Beth Strotz, who handle much of the administration duties. Brown’s wife, Karen, helps with bookkeeping duties and his children help out, too. His daughter, Joelle, 14, helps with tasks like organizing invoices and is helping paint the dealership this summer. His son, Marques, 11, helps detail equipment and set up the showroom.

Brown says he has access to a good labor force in the area and is considering adding more staff. “Most of our growth has been on the front side of the dealership, but adding more staff is our next direction… pulling the trigger on the right person to run the parts department and help with sales.” 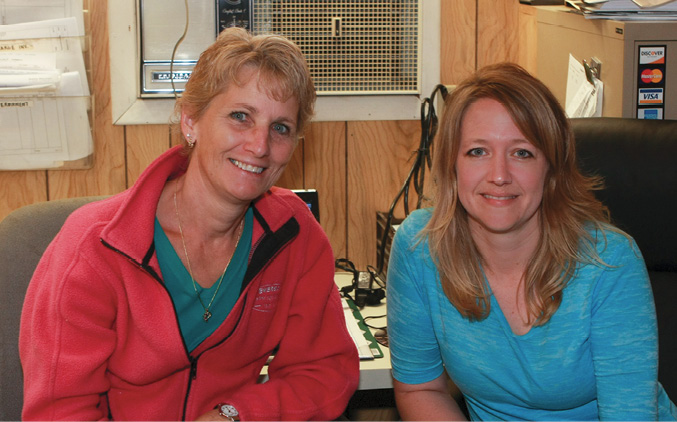 Brown sees a lot of possibilities ahead — some on the equipment side and some on the business side. He just launched his new website, www.brownstractor.com, after relying for several years on just a Facebook page and dealer pages from his manufacturers. “Hopefully, the website will drive new customers to our dealership. Most people start the buying process by going online to research products, services and dealer location. I am also hoping it will help our Canadian traffic, since we are so close to the border. We will also use it to list upcoming local events in the community, with links to our local chamber of commerce and other event home pages,” Brown says.

He is also planning on adjusting his goals now that his dealership is more established. “We set an annual model goal for Husqvarna our first year. I’m 1 unit away from meeting that this summer,” he says, adding that revenues are up 40% from where they were last year at this time.

What about expanding his lineup? “I’m always open to expansion and if there’s a good product line, I’ll consider it. We’re halfway through the year, so I don’t see anything happening for the rest of this year. I’m very pleased with the lines we have and I think we have a lot of areas covered.”