What Rural Lifestylers Want From You

Rural Lifestyler Works Around the Clock

Farmers and ranchers with off-farm jobs need equipment that can get big jobs done quickly.

Pictured Above: Gary Ellis, Sweetens Cove, Tenn., is an electrical engineer who raises cattle on land that has been in his family for more than a century. Ellis is loyal to the Massey Ferguson brand and says brand loyalty is a priority when considering new purchases.

They finish an “in-town” job at 5 p.m., only to start their second job as a farmer as soon as they get home. Your customers with off-farm employment need durable, reliable equipment so they can profitably raise crops and livestock during their limited evening and weekend hours.

Some may be starting a new venture and others, like Gary Ellis, are continuing a family tradition. Ellis of Sweetens Cove, Tenn., has a 50-head cow-calf and 200-acre haying operation on land that has been in his family since 1912. In addition to being recognized as a Century Farm by the East Tennessee Historical Society, his family is officially listed in the “First Families of Tennessee” registry, having proven their family’s residence prior to Tennessee becoming a state in 1796.

“It used to be that you could support your family on the family farm a hundred years ago, maybe with a few outside money-making gigs. Somehow, the economics of scale and cost of living have changed that scenario completely. Now, no one can support their family on the farm unless they are row-cropping a few thousand acres. The small and medium subsistence farming operations have been eliminated,” says Ellis.

• Operators of about a third of beef cow-calf operations work off the farm.

• States with the largest shares of small family farms are WV, TN, NH, AL and OK.

• Small family farms operate almost half of all farmland and account for 20% of ag sales.

Ellis’ main source of income comes from his job as an electrical engineer and the cattle operation helps him continue the family’s legacy. “Beef cattle is really the only thing I have time for, since they tend to take care of themselves to a large degree, other than hay production and feeding,” he says. “Of course, small scale is a pretty serious undertaking when you are working a full-time job as well — lots of ‘after dark’ work,” he says.

Ellis says that much of his area of east Tennessee consists of ownership of smaller tracts of land and his cattle and hay operation is made up of 9 acres where he lives plus separate fields of 72 acres and 109 acres within a few miles of his home.

“All of my land is in hay or pasture, although I do have about 4 acres that I keep in crop rotation between summer annuals and winter grass/grains for supplemental grazing. I basically travel in a circuit from my house to my farm throughout the season, harvesting hay from one field to the next. I am also a forest landowner and lease mountain land out to two different hunting clubs,” Ellis says. His hay fields are mostly native fescue grass.

Ellis says he and his father used Allis Chalmers tractors when he was growing up. “I stayed loyal to the company and gravitated into Massey Ferguson from Allis Chalmers after the AGCO acquisition of both companies. I began replacing my dad’s older tractors and expanding the quantities as well, in accordance with my own farming philosophy,” Ellis says.

He owns 5 tractors now, including an AGCO Allis 5670 tractor of his dad’s that he uses for mowing. “Being a busy guy and working a full-time job elsewhere, with very limited help, I don’t have time to change implements. I have found it more efficient to have tractors dedicated to certain tasks, even though it would be cheaper to have fewer tractors and change implements more often. Also, the breakdown of a single tractor is not as catastrophic, since more tractors give me some depth and ‘fallback’ options. It is hard to do tractor repairs and work a full-time job,” he says.

When Ellis took over the operation in 2006, he wanted a smaller, fuel-efficient tractor for lighter tasks, such as hay raking. So, he purchased a Massey Ferguson 2605 (31 horsepower, 2WD).

“It gets used a lot and probably accumulates more hours per year than anything else I own. My second purchase was for a Massey 583 (80 horsepower) in 2007. I love the wide working seat deck, fuel efficiency and large size frame that is not cramped with parts. I picked that horsepower since it was equal to the Allis Chalmers 6070 tractor that it replaced. I discovered that Massey Ferguson horsepower is not quite the direct equal to the old Allis Chalmers horsepower. You have to realize they give you almost the same power while using literally half the fuel,” Ellis says. He uses the Massey Ferguson 583 for baling. 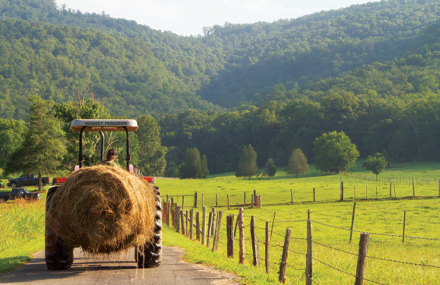 Gary Ellis raises his own hay for his 50-cow herd, traveling between three farms, which are located along the Cumberland Plateau in Tennessee. He uses his Massey Ferguson 573 for loading hay and feeding cattle.

“Being happy with that tractor, I next bought a very similar version, a Massey 573 (70 horsepower). It has slightly less horsepower but everything else is identical. I use it for a backup loader and feeding hay,” he says.

Ellis owns a Kubota M9000, his only 4WD tractor, which he had intended to be his primary tractor for loading and feeding hay, especially during muddy conditions. “I don’t have a lot of need for 4WD. Some years I don’t use the 4WD at all,” he says.

Ellis relies on haying equipment that has been used on his farm for years, including a Case IH 8465 baler and a New Idea disc mower. “I’m going to have to do updates soon as I’m way beyond the reasonable expected lifespan of those implements,” Ellis says. “I will be looking at the Massey and Hesston lines from AGCO.”

• Part-time livestock operators perform many of the same tasks as full-time operators, so they need equipment with similar power and capabilities.

• Find out the time limitations of your rural lifestyle customers. They may be considering additional or back-up equipment to make the most of their limited time for farm tasks.

• For some customers, bigger may not be better. Find out their true horsepower needs.

• Ask about a customer’s history with your brand to uncover their possible loyalties to your dealership or manufacturer.

Reliability and ease of maintenance are priorities for Ellis. “I like the Masseys due to their ease of service. They are laid out well with easy accessibility,” Ellis says. He says his service on the Kubota tractor is more difficult. “It is a very compact tractor. You have to do some contortions. Some of the grease fittings take two people and a special grease gun to reach,” he says.

For more complicated service or repairs, he turns to Bowman & Weaver of Henagar, Ala. “They used to be the nearest AGCO dealer and my dad had a history with them, so I have continued,” he says. His AGCO Allis 5670 was purchased from Bowman Weaver many years ago.

Ellis purchased his Massey 573 from Haney Equipment, which has locations in Athens and Cullman, Ala. The dealership carries Massey Ferguson, McCormick, LS Tractor, Woods Equipment, Scag, Ferris, Simplicity, Walker, Worldlawn and other lines.

What factors will he consider for his next tractor purchase? Ellis lists brand loyalty as his first priority along with reliability, fuel efficiency, a heavy-duty build and ease of service.

Ellis says the 2WD Massey tractors provide efficiency and the power he needs. “Using the 2WD tractors has been a great fuel savings for us just because the Massey tractors are capable and robust enough to perform without having to use 4WD on everything,” he says.

Ellis says a Massey 5609 or 5610 might be his next purchase. “It has all the great Massey features and is the perfect mid-size tractor for me. I don’t believe in overcompensating with more size or horsepower than you need,” he says. He also likes the tractor’s large frame, easy access for maintenance, fuel efficiency and its Dyna-4 transmission.

“As far as new tractor purchases go, I treat that pretty much like buying a car, and the way you buy a car has changed in the last few years. You go online, search for what you want, study all the options without going to a dealer, see who has that car, then barter back and forth to see who will give you the best deal. That’s exactly what I have done with my tractors. They have come from various locations. The only issue is the 1-year warranty. Only the dealer you buy from will honor the 1-year warranty. With my operation, I am generally not going to have problems in the first year anyway so it doesn’t matter,” Ellis says. 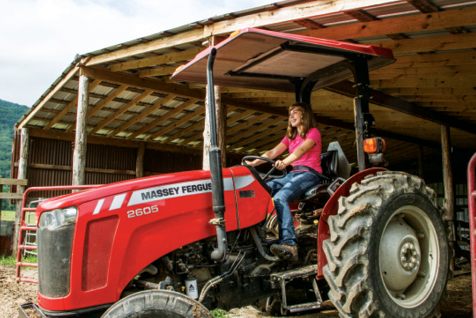 The Ellis family farm operation in Tennessee includes Gary Ellis’ daughter, Autumn, who is operating their Massey Ferguson 2605 near the cattle sheds. His wife, Melissa, also supports the operation.

“It’s possible I may not get a special rate from having purchased many tractors from the same dealer, but that is probably offset by me shopping around,” he says.

Ellis has taken the opportunity to officially provide Massey Ferguson with feedback about how he uses the tractors for haying and other tasks on his operation. He hosted a design engineer on his farm and traveled with a group to an AGCO manufacturing facility in France.

“I guess I am a good representative of a small, part-time farmer, which is a market they don’t want to ignore completely, even though the over 100 horsepower tractors are probably where they make their big money,” says Ellis.

Selling the Rural Lifestyler: People Buy Products from People They Like