MINNEAPOLIS — EY recently announced the winners of the EY Entrepreneur of the Year Award in the Upper Midwest. 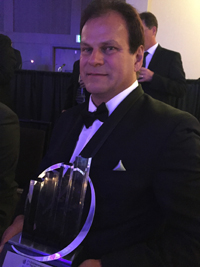 This year marks the award’s 30th anniversary. The entrepreneurs were selected by an independent judging panel made up of previous winners of the award, leading CEOs, private capital investors and other regional business leaders.

“EY has had a tremendous history in honoring outstanding entrepreneurs during the past 30 years,” said Todd Papa, EY Entrepreneur of the Year program director for the Upper Midwest. “This year’s winners have not only taken their companies to the top, but they have also acted as mentors to their employees and made impressive contributions to their communities.”

Winners of the Entrepreneur of the Year 2016 Upper Midwest award include:

In addition to the winners listed above, St. Paul-based Douglas M. Baker, Jr., CEO of Ecolab Inc., was presented with the Master Entrepreneur Award. He was recognized for his extraordinary entrepreneurial achievements, leadership and vision in helping make Ecolab a global leader in water, hygiene and energy technologies and services that protect people and vital resources, as well as for his steadfast commitment to the Twin Cities community.

Founded and produced by EY, Entrepreneur Of The Year is sponsored nationally by SAP America, Merrill Corp. and the Ewing Marion Kauffman Foundation. In addition, Merrill Corp. is the official and preferred data partner of the EY Entrepreneur of the Year Awards as a global leader in secure content sharing, regulated communications and compliance services. Merrill Corporation’s DataSite is used to facilitate the judges’ independent review of nominations. In the Upper Midwest, region sponsors include PadillaCRT, Faegre Baker Daniels, Twin Cities Business, Schulze School of Entrepreneurship, Salo, Lockton and Pohlad Companies.

EY is a global leader in assurance, tax, transaction and advisory services. EY refers to the global organization and may refer to one or more of the member firms of Ernst & Young Global Limited, each of which is a separate legal entity. Ernst & Young Global Limited, a UK company limited by guarantee, does not provide services to clients. For more information about our organization, please visit ey.com.