How Old is the U.S. Fleet of Farm Tractors? 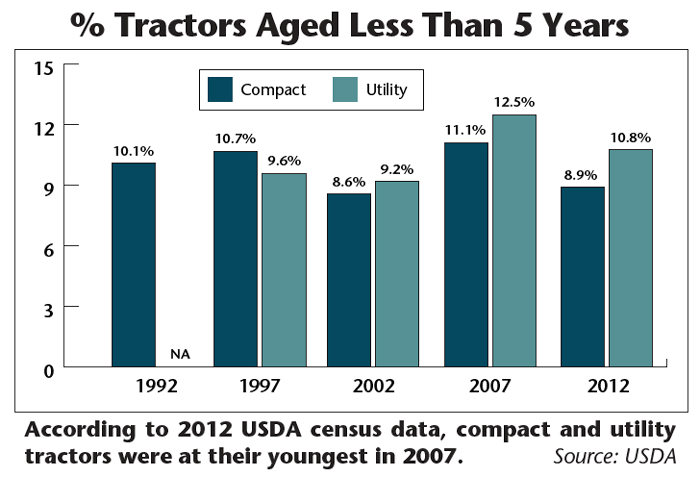 One of the questions most often asked of Ag Equipment Intelligence editors is what is the average age of the tractors in use on U.S. farms?

The fact of the matter is no one can say with any certainty. This is because, unlike automobiles and trucks, which must be registered and licensed, the same requirements are not applied to off-road vehicles, like farm tractors. While Uniform Commercial Code (UCC) filings track new sales, there are few if any records that follow the vehicle after it passes from the original owner.

At this point, the best we can do is study USDA’s Census of Agriculture, which is conducted every 5 years. Using this data, last year, RW Baird analysts estimated that about 16% of high horsepower tractors in the U.S. were less than 5 years old. This was up from about 12.5-13% in 2007.

Ag Equipment Intelligence editors took a look at the lower horsepower tractors and developed the adjacent table and chart based on the USDA Ag Census data. The most notable shift in the average age of both compact and utility tractors during this 20-year period came between 2002-07. In 2002, 8.6% of compact tractors were less than 5 years old, on average. This jumped to 11.1% by 2007, indicating, overall, this category of equipment had gotten younger. By 2012, this percentage dropped back to 8.9%.

How the Mahindra Group is Investing in the U.S.