Autonomous Equipment as a Solution to the Labor Shortage

By Ben Thorpe posted on February 12, 2020 | Posted in Niche Markets

No sector of the equipment industry is immune to the labor shortage, and this certainly holds true for those in the lawn and golf course maintenance business. As workers of all skill levels become tougher to find, businesses are forced to do more with less. Autonomy could be the innovation that bridges the gap for businesses looking to stay in the green.

At the heart of this situation is demand for service, which is growing faster than the available workforce. Data from the U.S. Bureau of Labor Statistics shows that employment on golf courses and country clubs and in landscaping services has more than doubled between 1990 and 2018. 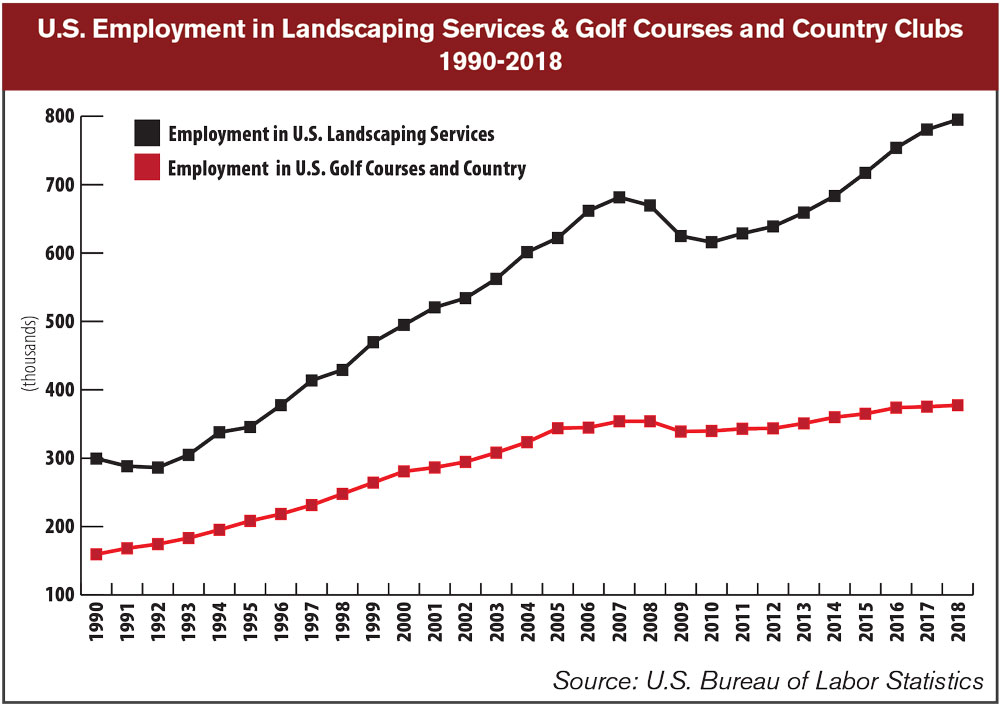 The concept of using self-driving equipment to address labor concerns is not new. A 2010 article from Robotics Business Review noted the potential in autonomous mowers, saying, “Given the labor-intensive nature of large-scale commercial landscaping and turf maintenance, Robotics Business Review sees very little chance that the potential market for autonomous or semiautonomous lawn-care equipment will vanish due to disinterest from customers.”

Toro’s presence in the turf and golf course industries positions them well to implement autonomous technology effectively. According to Michael Shlisky, analyst with Dougherty & Co., while Toro entered the autonomous mower market in 2001 and has not made any new entries in some time, he noted that the company’s window to re-enter with an improved product hasn’t closed yet.

“We think the potential for robotic mowers is high, but the products on the market at the current time are getting mixed reviews on social media at best,” said Shlisky. “Many involve special installation using buried wire boundaries, produce an uneven cut, or cover limited amounts or types of terrain. That said, in 2020, there could be several new models on the market that improve upon the current technology, including Toro’s first products and other new entrants.”

It seems that Toro will need to move fast, however, as more brands move into the autonomous mower space. Competition is already in the market, whether it’s fairway mowers (like the TurfLynx F350), sports field mowers (like Echo’s offering) or consumer models (like the Husqvarna Automower and STIHL’s iMow).

Advancements are continuing to improve the functionality and price of the technology. As reported in Rural Lifestyle Dealer’s coverage of the 2019 GIE+EXPO, Mean Green Mowers unveiled its own autonomous, electric mower unit at the show, the ATOM. Unlike the other equipment currently available in the industry, the ATOM requires no set up, piloting itself solely based on its KobiVision system of cameras and sensors. Steven Waelbers, chief technology officer of Kobi, said that the ATOM “is going to solve the biggest issue in landscaping today: the labor issue.”

The initial investment into autonomous mowers is a barrier to some, but saving on labor costs could be incentive enough for some groundskeepers. In a report from Golf.com, Bob Farren, director of maintenance at Pinehurst Resort, says that he believes autonomous mowers will be the industry’s next big innovation, saying, “It’s a high expense, but it will be more attractive with labor shortages.”

Dealers need to take a realistic look at market demand. In a 2018 report from Pennsylvania State University, Dan Eichenlaub, founder of the landscape firm Eichenlaub Inc., spoke with students about perceptions of robotic mowers. “You can have the best technology in the world, but if no customer wants it at their property, it isn’t a solution.” The report mentions that customers may have safety concerns about children and pets and may consider buying an autonomous mower as opposed to hiring someone who uses the technology. [Video] Starting a New Career as a Dealership Owner

From the Field: 5 Ways to Sabotage a Sale