Often called the "Swiss army knife" of construction equipment, the compact and powerful skid steer and its tracked counterparts can find work on a hobby farm or in a landscaping operation as easily as they can on a building site.

The skid steer has been so completely adopted by the construction and rental equipment industries it can be easy to forget that the concept of a compact, easily maneuverable loader got its start on a farm in North Dakota.

During the housing boom of the past decade this product segment was popular, although that changed quickly when the economy collapsed. The past couple of years have been tough on compact equipment sales. Manufacturers reported sales declines of greater than 50%, a direct result of the record fall in the residential property market and a sharp decline in new construction projects.

Today, sales of skid steer units and attachments are "very spotty. From late 2008 on, sales really dwindled," says Dave Heck of Jacobi Sales Inc., which has seven dealership locations in southern Indiana and northern Kentucky. "I think sales could go either way today. The market is changing because so many people are out of work. Many of our customers are trying to create niche businesses to bring in some income. You can do that with a skid steer and attachments. Some of our customers are travelling throughout a five-state area to get clean-up work after storms."

Jacobi Sales' region has been hit with a rash of ice and windstorms, even tornadoes. "We've been getting a lot of requests for grapple buckets to pick up trees and limbs around their property," says Heck.

As with a tractor, the skid steer requires attachments to be productive. Thanks to the popularity of this product segment during the latter half of the past decade, a large array of attachments have been developed. These attachments can easily expand - and quickly complicate - a dealership's product offering.

Variety brings people through the door, and, says Heck, if "you carry only one thing, your business is not going to survive. The days of carrying one line of anything are gone." 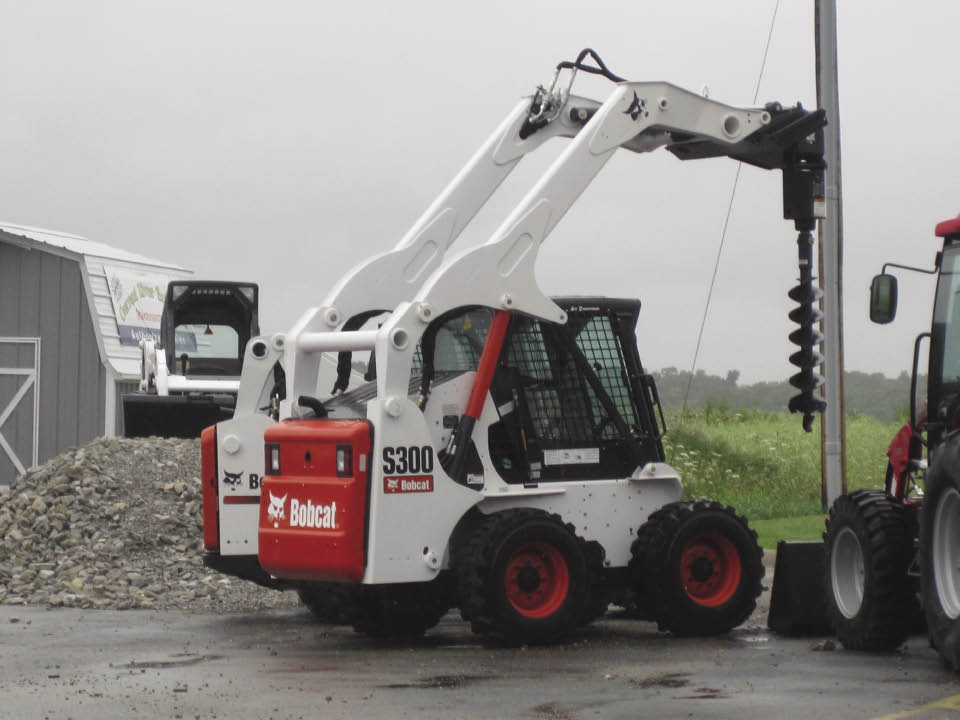 The best advice when taking on a skid steer line, says John Williams of Hirsch Feed & Farm Supply, is to make sure you train your sales force and service personnel well, and have parts in place. "The staff must to be ready to help customers go through the variety of attachments that are available."

In order to be successful with skid steers, dealers who get into the business must be committed to it, from offering financial services to stocking attachments and replacement parts. Although sales these days are generally flat, there's still a market for skid steers, especially in light construction and landscaping applications. "Most operators make money with their units," says Eric Schnelle, president, S&H Farm Supply, a four-dealership company based in Lockwood, Mo. "When those guys look at a dealership they want to know you can keep them working if there is a problem with the equipment. Downtime is costly."

Keeping a selection of skid steers and attachments in stock is also important, especially these days. Production slowed as sales declined, and this year many manufacturers of skid steers have introduced new models, resulting in long lead times. Some manufacturers need a lead time of 3-6 months for delivery of a new unit.

Although dealers should have a variety of attachments in stock and ready to move, they don't have to sell new skid steers to attract that business. Of course, having the ability to sell a complete package at a discount can help make a sale.

Most of the attachment buyers at Hirsch Feed & Farm Supply Inc. in West Plains, Mo., already own a skid steer, says John Williams, one of the owners. "There are a lot of used skid steers out there. People will buy a used one from a dealer or a private seller and come in here for attachments. Once they see what the machine can do, some will buy another attachment every year."

An equipment dealer since 1974, Hirsch has carried skid steers for only 3 years. "We've not been a skid steer dealer in a good economy yet," says Williams. "We got in when it slowed down. As the economy improves, we're looking forward to taking advantage of the relationships we've developed as a new dealer in this region."

Williams says the attachment business is growing. "It started out not all that big, but it has really increased over the last year and a half. Buckets are by far the most popular, but we're selling a diverse line of attachments. Specialty equipment has been especially popular, such as brush cutters and trenchers." 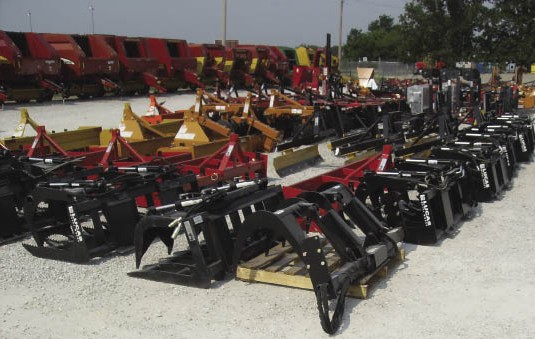 Attachments are an impulse item, says Eric Schnelle of S&H Farm Supply. Customers usually head to the dealer when they have a job for a particular piece of equipment. If it's in stock and ready for work, it will sell. Grapples were very popular at S&H's Joplin, Mo., store, following the disastrous tornado there in May.

Schnelle says most of his skid steer customers are full-time farmers or professional operators who are making money with them. New skid steer units are considerably more expensive than a tractor. "When we sell them to hobby farmers, they're often businessmen with acreage who want to clear right-aways or put in food plots. They will buy several different attachments to take advantage of the machine's versatility."

Attachments are an impulse item or are purchased as needed. Even construction contractors, who typically plan their equipment purchases well in advance, may take on a new job and need an attachment that day. If one dealership doesn't have it, they will go to another supplier.

"You have to treat skid steer attachments like any other impulse item," says Schnelle. "If you have it, you will probably sell it. Buyers don't want to wait a week."

Because of the price of new skid steers, hobby farmers are more likely to buy used, as you can get a "pretty good machine a lot cheaper," says Williams. Compact track loaders have been popular for landscapers, but availability has been tight for certain models. He says they sell one as soon as he can put it on display. This is driving some customers into used units, as well, with some upgrading to new as they become available.

"One of the ways we get customers interested in skid steers and attachments is through our rental services," says Heck. "That allows us to reach those consumers who might have a need for a skid steer for a few jobs. Once they try it out for a day or two and they see what else they can do with it and some will look for a rental-purchase option, or buy it outright."

When a used machine changes hands, it creates an opportunity to sell more attachments. But because they can be easily purchased off the Internet, a dealer's price point is very important. Most rural consumers would rather buy locally, but if there's too much of a gap they will keep moving.

"Smart shopping can make or break you on skid steer attachments," says Schnelle. "When we first got into this, we went with attachments from a supplier who handled everything. Then we discovered someone else was making the equipment for them, and they were adding their own mark-up. That didn't make us competitive. With a little shopping around, we found some good prices through quality manufacturers."

There are many companies that specialize in pallet forks, and some will give dealers a price break and free shipping if they order several units at once, for example. "You might have to buy in volume to keep your price down," suggests Schnelle. "If the pallet forks you're selling are $50 too high, you're out of the market. We sell tons of them because we're at the right price point and still make a reasonable margin."

In another example, "We sell a lot of brush grapples to clean up after ice storms and tornadoes. I've been stocking grapples for $3,500 retail, and then found a good medium-duty grapple for $1,999. Our sales have doubled with that price point. We're not catering to commercial contractors who are picking up concrete. These farmers and large property owners want to put a grapple in front of their tractor or skid steer and clean up around their place," Schnelle says.

Another area to be careful with is that there are a lot of poor quality imported attachments out there, says Schnelle. "But there many small independent manufacturers throughout the U.S. that do a really good job making attachments that are reasonable in price. In the attachment business, many of the players are not worldwide conglomerates. There are a number of small, family-run companies that are willing to partner with you and be flexible to help you grow your sales.

"When I call them I'm usually talking to the owner of the business, and he's also the main salesman and sometimes the engineer," says Schnelle. "Developing a relationship with a company like that can make things possible that would never happen with a corporation. When you shop for a good supplier, you can grow the product line together."

A case in point: After the F6 tornado tore through Joplin, Mo., on May 22, it spared the S&H store but destroyed the city itself (see sidebar). "A guy from Texas was driving up to Joplin to help a relative clean up, and he called one of our suppliers to buy a tree shear for his skid steer," says Schnelle. "He wanted to pick it up by the end of the week, when he would be in town."

The manufacturer referred that customer to their local dealer, S&H Farm Supply, but the tree shears were sold out. So the manufacturer dropped everything, made a unit for the customer, and shipped it to Joplin a day early.

"Some of the supplier manufacturers do a really good job of marketing their equipment, and they can help drive a lot of leads to your dealership," Schnelle says. "That needs to be in a dealer's thought process, too. It is hard for a dealer to advertise all the attachments he might have on the lot. For a dealer, the best advertising might be when a customer wanders the lot and sees all of the attachments you carry. But as far as developing new leads, I really think the manufacturer is key to pulling people into the dealership."

How to Sell: Expanding into Construction with Skid Steers

How to Sell: Service a Must for Pressure Washer Sales

How to Sell Generators: Selling Peace of Mind