An improving rural economy in the U.S. and Canada has equipment dealers who cater to rural consumers feeling optimistic about their opportunities for increasing sales revenue in 2012.

Nearly half, or 48%, of equipment dealers serving the rural lifestyle, lawn and landscape markets expect business levels to continue improving in 2012 compared with 2011.

Combined with those who are forecasting that their revenues will come in at least as good as 2011, nearly 84% of these retailers are confident sales of equipment will be solid throughout the year ahead.

Breaking down the responses of more than 130 rural lifestyle-focused dealers responding to the Dealer Business Trends & Outlook survey conducted by Rural Lifestyle Dealer in December, 11.5% are projecting total revenues will increase by 8% or more in 2012.

The general economic outlook for rural America is strengthening, thanks to high commodity prices that have farmers flush with cash. Successful “buy local” campaigns are also keeping consumer dollars closer to home, with more people looking to do business at independent local stores and banks.

In December 2011, the rural U.S. economy was at its highest level since 2007 according to Creighton Univ.’s Rural Mainstreet Index (RMI). The index has remained above growth neutral for nearly two years, driven by the strong farm economy. According to Creighton Univ. economist Ernie Goss, “Growth in the areas of the region and country tied to agriculture and energy are outpacing urban areas. Our survey is detecting a very healthy Rural Mainstreet economy with the gap between urban and rural widening.” 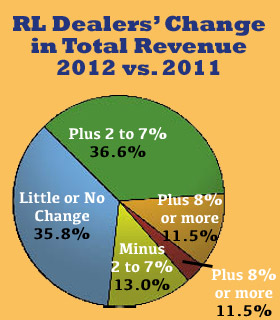 The Creighton survey represents a snapshot of the economy for rural portions of the nation. To compile the RMI, community bank presidents and CEOs in nonurban, agriculturally and energy-dependent portions of a 10-state area (Colorado, Illinois, Iowa, Kansas, Minnesota, Missouri, Nebraska, North Dakota, South Dakota and Wyoming) are surveyed monthly by the university. It focuses on around 200 rural communities with an average population of 1,300.

Consumer confidence is infectious. Even if an equipment dealer’s customers have no direct connection to farming, their neighbors and friends probably do. The December RMI showed that the economic confidence index, which reflects expectations for the economy six months out, climbed to 61.8 from November’s 57.5 (50.0 is “growth neutral”).

This confidence is reflected in the 2012 Rural Lifestyle Dealer survey, too. Of the rural consumer focused equipment dealers who responded to the survey, 36.6% forecast revenues growing by 2-7%. Only 3.1% of dealers anticipate revenues falling by 8% or more, while 13% expect revenues to decline by 2-7%. The remaining 35.8% of dealers are forecasting little or no change going forward compared with 2011 revenue levels.

Overall, a net 32% of dealers believe their revenues in 2012 will increase vs. the previous year as 48.1% expect sales to be 2% or higher compared with 16.1% who anticipate sales will decline by 2% or more.

Few dealers (11.7%) are anticipating decreased parts and service sales compared to last year. Less than 4% see revenues from these revenue streams falling by 8% or more, with another 7.8% expecting a drop of 2-7% in the year ahead.

Dealers in the survey identified at least 10 products they expect will drive improving revenues in the year ahead.

Number two on their list of best prospects for increasing revenues in 2012 are under 40 horsepower tractors with 44.2% anticipating growth of 2-7% and another 5.8% forecasting increased revenue of 8% or more.

Zero-turn mowers was number three on the list with 42.9% of dealers anticipating rising revenues of 2-7% and 6.7% projecting a growth of 8% or more in revenues.

To improve sales in the coming year, dealers are also looking to add new products to their current line up. Nearly one-third of dealers (32.4%) say they’re currently looking to expand their product offerings in 2012 by adding both under-40 horsepower and 40-100 horsepower tractors.

Following compact and utility tractors, zero-turn mowers are next on dealers’ lists (29.4%) as additional products they want to carry in the year ahead. Next are utility vehicles (27.9%) and lawn tractors (20.6%).

While most rural lifestyle-focused dealers expect solid footing in terms of improving revenue levels going into 2012, they also have major concerns for the year ahead. Number one among these are the rising health care costs for employees.

Nearly 89% of dealers (47.4% concerned and 41.4% very concerned) indicated that this is their major issue going into 2012. It was followed by low sales margins, as 87.4% say they are concerned or very concerned with customer’s growing fixation on low prices that are leading to much lower margins than dealers were seeing in past years.

Nearly 80% of dealers listed customer access to credit as the number five issue that they’ll need to contend with in 2012, with 79.4% of dealers saying they’re concerned or very concerned with it going into the new selling season.

The shift in the top concerns from last year’s Dealer Business Trends & Outlook survey shows dealers are becoming more confident about the state of the economy. In 2011, the high unemployment rate was ranked as their greatest concern by 86% of the dealers polled.

“Low sales margins” finished second on the 2011 list by 82.8% of the dealers. The poor condition of the housing market was number three by 75% of the U.S. dealers. “Finding good employees” rated number four, with 73.4% of the dealers reporting that’s what keeps them awake at night. Rounding out the dealers’ major concerns in 2011 was customer access to credit and financing.

compared to big box stores that sell equipment, the service provided by independent dealerships is one of the biggest and most significant differentiators. It makes sense, then, that the majority of dealers who responded to the survey plan to make improvements to their shop and service operations in 2012. This year, 66.7% of dealers plan to spend more money in those departments.

Upon entering the dealership, rural consumers expect to find the modern, clean and well-lit showroom that they’ve grown accustom to from shopping at chain stores. Of the rural lifestyle dealers who responded to the survey, 60% of the dealers expect to make capital expenditures in retail modernization and improvements in 2012.

Of the dealers who responded to the survey, 75.6% say they have hired salespeople who are dedicated to serving customers in the rural lifestyle market. Survey results indicate that this focus has a positive effect on their optimism when it comes to revenue increases in this segment in 2012.

Of the North American dealers with personnel dedicated solely to the rural consumer, a net 42.1% believe that their revenue will grow more than 2% this year. That number drops off significantly when their salespeople are expected to wear multiple hats — perhaps working separate deals for a combine and a hand-held trimmer in the same morning. A net 13.9% of those dealers expect revenue from rural consumer market to grow more than 2% in 2012.

While Internet research is giving the rural consumer an opportunity to educate themselves about the different brands and types of equipment available before they walk into a showroom, many still defer to the salesperson as the machinery expert. Of the more than 130 rural lifestyle equipment dealers who responded to the survey, a net 93.3% of dealers report that consumers still need some form of direction when it comes to buying a particular piece of equipment.

How much a salesperson is attuned to the consumer can make a difference in the sale. On a weighted average, 48.8% of dealers without a dedicated rural consumer salesperson say their recommendations are accepted, while 53% of those with sales people focused on rural lifestyle customers say their suggestion results in a sale of that particular unit.

A similar trend is found in dealer responses to how much they expected their aftermarket revenues (parts and service) to change in 2012. Of the dealers with sales people dedicated to the rural consumer, a net 44% believe their aftermarket revenues could increase more than 2% in 2012. Among dealerships without, a net 36.7% believe their revenue will increase more than 2%.

Whether or not they have a dedicated sales force also affected a dealer’s optimism for types of equipment. Dealers without dedicated rural consumer salespeople responded that their highest sales projections for 2012 were in utility vehicles, with 47% feeling sales would increase more than 2%. Of dealers with a dedicated sales team, compact tractors (under-40 horsepower) are in the number one spot, with 57% of dealers projecting that sales would be 2% or greater.

Dealers in this survey represent 14 different brands of compact and/or utility tractors. This year, the top five tractor brands represented by the rural lifestyle dealers who participated in the survey are Kubota dealers with 35.1%, New Holland (30.6%), John Deere (20.7%), Massey Ferguson (13.5%) and Case IH (12.6%).

Compare that to last year, when nearly three-quarters (73%) of Case IH dealers believed sales in this market segment would increase by more than 2%, and 70% of Kubota dealers felt the same way. John Deere was third in 2011, with 64% projecting sales revenues would improve by at least 2% to more than 8%.

A comparison of how U.S. and Canadian dealers view business levels in their rural consumer and lawn/landscape markets shows more confidence among dealers to the north.

Of the U.S. dealers who responded to the 2012 survey, 82.7% expect sales revenues this year to be at least as good or better than what they experienced in 2011. This compares with 93.3% of Canadian dealers who expect revenues over the next year to equal or surpass revenue levels seen last year.

When looking at dealers from the two countries in terms of growing sales revenues, the difference is even greater. Among Canadian dealers, 80% anticipate growing revenues at 2% or better in 2012. In comparison, 43.5% of U.S. dealers project sales revenues to the rural lifestyle market to increase by 2% or more.

For Canadian dealers, this revenue growth is expected to come from sales of utility tractors (40-100 horsepower) and front-end loaders (both tied at 71.4%). Other equipment that Canadian dealers anticipate will grow sales by more than 2% are utility vehicles (69.2%), compact tractors (64.3%) and rotary cutters (57.2%).

While there’s still a lot of concern over the condition of the general U.S. economy in this election year, rural markets are in the best shape they’ve been for a long time. Rural regions have become a source of fuel as well as food and fiber. This is helping to drive crop prices and land values up. The good news coming from small-town America is attracting the attention of “big city” investors, which is bringing confidence and new money to rural areas.

Equipment dealers who have or are ready to embrace the differences between a hobby farmer and a production farmer will be in the best shape to capitalize on the strong rural economy.