Engine repair has been the cornerstone of Jeff Kruse’s dealership since its beginnings 30 years ago. However, he’s been able to triple the parts segment of his business in the last three years because of two strategies: Carrying a wide variety of parts and selling parts to other dealers.

With today’s trend toward multi-store locations, Jeff’s single location in Milltown, Wis., may be considered a small dealership. However, Kruse is proud of the fact that he’s crossed the $1 million mark in overall revenue.

“It was huge for me to get to that point and now we’ve hit that target for three years,” he says.

Kruse says he’s been doing the same job since he was 12 years old, when he began helping his dad at his repair shop, Chuck’s Repair. Their main business was fixing cars and tractors, but they also sold and fixed lawn mowers and snowmobiles. Kruse started his own repair business in 1982 and combined with his dad’s company in 1990. In the early days, he sold Hahn lawn mowers, Poulan chainsaws and Lawn-Boy mowers and over the years his lines evolved based on manufacturer buy-outs.

Jeff and Karyn Kruse own Jeff’s Small Engine, a repair shop in Milltown, Wis., that has grown its business through parts sales.

• Location: Milltown, Wis., about an hour from Minneapolis and St. Paul, Minn.

A turning point for his dealership came when they moved from a location at his dad’s home and built a new store on a state highway on the edge of Milltown, a city with a population of about 900. The new location includes a main building that is 3,200 square feet and a warehouse that is 4,000 square feet. The new location provides greater visibility to recreational customers headed to the area’s many lakes in northwestern Wisconsin. Kruse says he does have competition from John Deere and Case IH dealers in his region, but there are few service dealerships like his in the area.

Wilder says buying parts through a fellow dealer like Jeff’s Small Engine is important for his small business.

“You have to be so big before some places will deal with you for parts.”

He had met Jeff Kruse, owner of Jeff’s Small Engine, through friends and approached him about buying parts.

“There are not a lot of people willing to give you a chance when starting out. Jeff has helped me out tremendously. I would have had to order at retail prices and not get the kinds of deals that Jeff offers,” Wilder says.

Ace Motor Sports has grown to the size where Wilder is now ordering some parts on his own. However, he says he expects to continue to buy some parts through Kruse.

“I think I’ll always do some business through them. He’s been good to me.”

“Everybody does everything. They do whatever needs to be done and are a huge part of our success,” says Kruse.

That might mean servicing equipment, selling and stocking parts, or working with other stores.

Kruse says the parts segment of his business brings in about $200,000 in revenues to the dealership.

“It may not be a big dollar amount, but it gives us a bigger profit margin compared with selling equipment,” he says. His strategy is to keep parts moving in and out as quickly as possible.

“We stock a lot of fast-moving parts for lawn mowers, chain saws, snowmobiles and ATVs like belts, blades and spark plugs. We stock a lot of parts that other places don’t. People know they can get the part when they call or we can get it within a day or so.

He carries parts from about a dozen different manufacturers and distributors, including Oregon, Stens and Parts Unlimited and he buys a majority through Central Power Distributors.

Kruse says that his parts business grew when he started selling to smaller dealers about 12 years ago. It wasn’t a segment they intentionally went after, but it just grew as smaller businesses, like ATV, snowmobile and motorcycle dealers, auto parts stores and tire distributors, started calling him for parts. Kruse then started meeting with others to tell them what he could offer.

“We’re a bigger parts dealer, so we can buy at good prices and get free freight,” he says. “The smaller dealers were just placing orders here and there. They were buying the same parts we were and we could set up a better deal for them. Everybody is profiting and they are encouraged to keep buying from us.”

Kruse also says some of the smaller dealers didn’t buy enough for distributors to even set up agreements, so they were glad to have an option for buying less expensive parts.

• Product lines such as parts may bring in small dollar amounts compared with equipment sales, but can still improve a dealership’s overall revenue.

• Customers with broken-down equipment can be frustrated when they come in for parts. Be a trusted, reliable, friendly expert to encourage repeat business.

His parts prices to dealers are set at 10-20% above cost, depending on volume. He knows that revenue from dealer sales are less than from customers, but still worth it.

“It all boosts my volume so I get a better price,” he says. Plus, the labor is minimal. Often the dealer parts never land on his inventory shelves. He calls the dealer customers when the parts arrive and they often pick them up on the same day.

In his early days, Kruse used a card file system to track parts, as did many dealerships. He’s been using Softpower by c-Systems Software since 1998 to manage inventory and purchasing. He places his main parts orders in the spring based on the past year’s sales history and orders parts several times a week, sometimes getting multiple shipments a day.

He uses PartSmart for online parts lookup software. Kruse says PartSmart is an investment for a dealership his size, but it’s a tool he can’t do without.

“We took half of our inventory and moved it into the cabinets. That’s been one of our greatest improvements,” he says. “Inventory control is a big issue. We’ve got a good system now for storing parts and knowing exactly where everything is.”

Kruse says the cabinets make grabbing a part much quicker than rifling through a bin. One area that still could be improved is returns on parts that aren’t in demand. However, it’s just those uncommon parts that make him a dealer people can rely on.

“I like keeping parts on hand because sometimes it’s a $1 part that can mess up a whole repair job,” he says. “And when somebody comes in with money in hand, I hate to turn them away.” 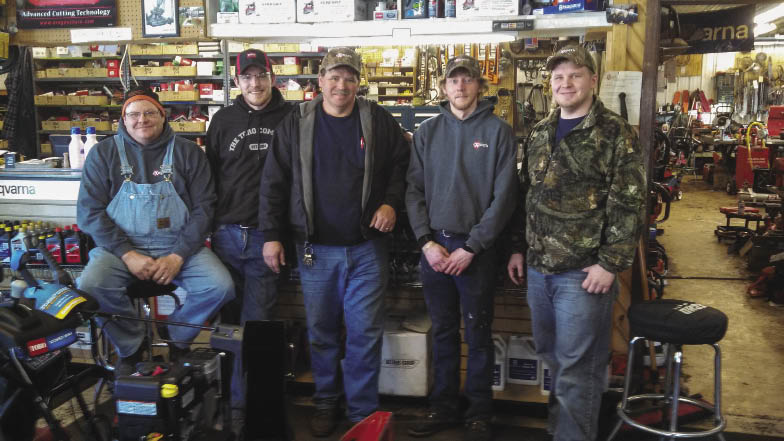 The team at Jeff’s Small Engine pitches in wherever they are needed. From left: Jon Christensen, Andy Kruse, Jeff Kruse (owner), Dane Olson and Kyle Filip. Jeff Kruse says his team has been a huge part of his dealership’s success.

Dealers have many options for advertising today, including print, radio, television and online. Kruse says word-of-mouth recommendations have always worked the best for him but he also relies on other traditional and low-tech approaches: a highway billboard and shirts and caps.

The billboard is on a busy state highway where he says many customers see the sign as they are heading to area cabins and lakes. They then call him when their recreational equipment breaks down during their vacations. Commuters to St. Paul and Minneapolis, Minn., also see the sign.

Kruse shares this story about how a T-shirt led to a sale. An employee from the state’s department of natural resources was fishing and saw another fisherman wearing a Jeff’s Small Engine T-shirt with the Exmark logo.

“He had really wanted to buy an Exmark mower. He read my phone number off the back of the guy’s shirt and called me,” he says.

Become a Trusted Source of Information

Kruse says that in the service and parts business, trustworthiness and reliability are as important as equipment expertise.

“We always try to evaluate what the customers’ needs are. Sometimes, they come in and say they need a carburetor and I tell them all they really need is a part like a gasket,” he says. 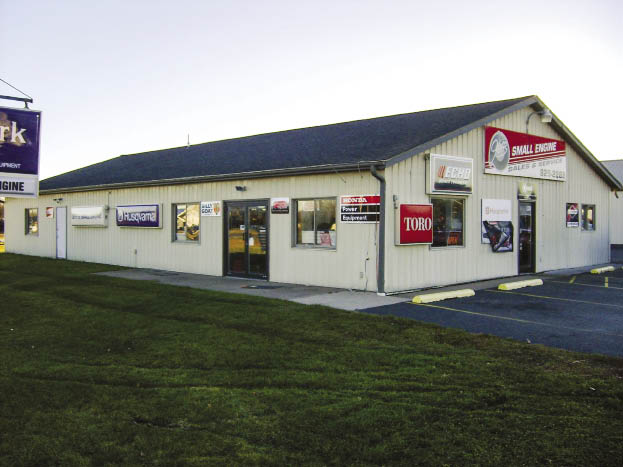 Jeff Kruse, owner of Jeff’s Small Engine, Milltown, Wis., buys parts in larger quantities from a variety of manufacturers and sell them at a discount to smaller dealers.

“It’s about explaining why the breakdown happened, what may have caused the issue and how to avoid it in the future,” he says. “We try to explain and relate to the customer rather than just saying, ‘You need this part.’ In my mind, that’s a huge difference.

“It comes down to our experience to tell them if the equipment is worth fixing or if we feel it’s not worth it. Ultimately, it’s the customer’s decision, but we want to be honest and not seem as if we’re trying to push new equipment,” Andy says.

Good customer service skills are especially important when selling parts. Customers may come into the dealership frustrated because of broken-down equipment.

“I try to teach the younger people that you can’t get angry. Ninety percent of all people are decent, but everyone can have a bad day. Try to work through it. Be nice to them or you’ll never get any business from them,” Kruse says.

Several threats could influence future growth for parts dealers like Kruse. Selling parts to dealers means the success or failure of those businesses influence his business.

“Parts sales can go in streaks. We used to sell to a tire distributor and then they went out of business. Another company is growing and could become big enough to buy parts on its own,” he says.

The Internet is also a competitor.

“The Internet is our friend and our enemy. Anybody online is our competitor,” Kruse says. He adds that phone calls have to balance between helping a customer and just giving them a part number so they can buy it cheaper elsewhere.

“You can feel people out by talking to them. It’s not a huge problem, but it’s definitely a problem,” he says, referring to shoppers using his expertise and buying somewhere else.

Setting the right price is also important to keeping business.

“You have to be competitively priced. Sometimes, it seems like we have to keep selling just a little more to stay the same,” says Kruse, referring to the ongoing struggle of dealerships to remain profitable.

Andy adds: “One of our biggest struggles is the cost of labor and parts vs. buying a new machine. It’s a throwaway world.”

Andy says the small community helps them address a lot of these obstacles because people respect their work and know they can rely on them.

“You’ve got to think and hope that knowledge is behind our success. It’s not just about calling a phone number to get parts.”