John DeFilippi started his Boulder, Colo.-based landscaping business in 2010 with no prior experience in the landscaping industry. He based his business model on the use of quieter, cleaner and non-toxic practices and his Ecological Lawn & Tree Care now has revenues of more than $400,000.

“I felt there was a niche in the industry that was not being met in my market — sustainable earth-friendly lawn and tree care. There was nobody, and still is nobody, in my market area that delivers the whole service in a sustainable and earth-friendly way. We look at everything from vehicle emissions to fertilizers to the amount of water used in irrigation,” DeFilippi says.

There was no “off-the-shelf” solution for all of his equipment needs. So, he researched options and developed relationships with manufacturers and a local dealer to build his equipment inventory and deliver on his ecological promise.

DeFilippi leveraged his entrepreneurial experience to start his company. In 1988, he founded a moving and storage company and built it up to 100 employees before selling it in 2005. He sought out entrepreneurs in his family for help in starting his second business, this time in the landscape segment.

“I have family in the business in New York. I spent a lot of time talking to them and learning from them. I had a lot of education going into the business,” he says.

DeFilippi also bet on the preferences of consumers in Boulder, which tend to be more environmentally conscious than in other markets. Homeowners also are on the upper-end, with the price of the average single family home at $548,000 locally, compared with the national average of $227,000, according to the National Assn. of Realtors.

“A lot of people don’t realize how dirty the lawn and landscape business is,” he says.

“Boulder is more earth-friendly, but that wouldn’t stop me from trying this business model in other parts of the country.”

He shares these statistics on the Ecological website and in his conversations with potential customers: 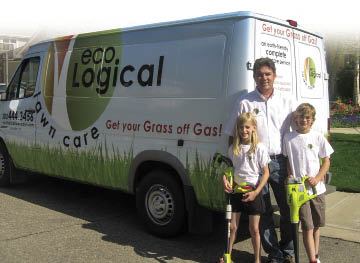 John DeFilippi, shown here with his children Tess (left) and Ryan (rt.), began Ecological Lawn & Tree Care in 2010 and has seen steady growth since then.

Company Focus: Landscaping services that are based on the earth-friendly approach of quieter, cleaner and non-toxic practices and equipment.

Equipment: Scag, Wright Stander and Toro mowers that have been converted to propane; Worx electric mowers; and CORE Outdoor Power trimmers and blowers. Some Stihl gas-powered equipment as backup.

• Gas-powered lawn equipment burns 580 million gallons of fuel per year and contributes up to 5% of urban air pollution.

He says that about half of his new business comes through the Internet.

DeFilippi says in his first year he used consumer-grade equipment like Ryobi, Worx and Stihl that he bought at big box stores. In 2011, he discovered CORE Outdoor Power’s commercial-grade, battery-powered, hand-held power tools at the annual Green Industry & Equipment Expo in Louisville, Ky.

“The thing that I love about CORE is that they are meeting the demands of a commercial user.”

He began working with the company directly to purchase lawn trimmers and blowers to test the next season.

“The battery run time is longer. The power of the machine is greater and the machines are much more durable. That answers a lot of my questions and solves a lot of my problems.”

He also went to an area dealer, G&G Equipment of Fredrick, Colo., to find mowing equipment to meet his standards. He talked with co-owner Chuck Giefer about commercial options and decided converting commercial mowers to propane was the best choice. DeFilippi worked with a local service shop on the conversions. However, he says his team is considering doing its own conversions on future equipment.

In the height of the season, Ecological sends out four service vans, some pulling equipment trailers depending on the job size. Last year, he had one van dedicated to commercial accounts, such as homeowner associations and private schools. This year, he’ll increase that to two vans. Each commercial crew has three employees and a supervisor. Two-man crews handle the residential accounts.

The commercial crews generally use a 72-inch Scag mower, two Wright Stander stand-on mowers, two Toro push mowers, and two each of the CORE blowers and trimmers. The riding, stand-on and push mowers have been converted to propane.

As far as the possibility of lost power with a machine converted to propane, DeFilippi is not concerned.

“This is the way we started our business and I never wanted to use gas-powered mowers. My guess is that if there is a drop in power it’s barely noticeable. The manufacturers claim there is no loss in power,” he says. 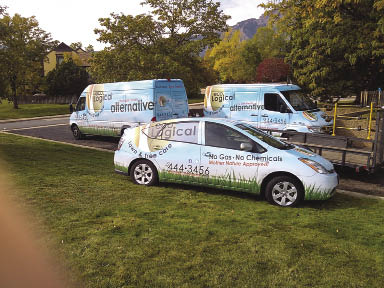 Ecological Lawn & Tree Care vans and trailers are stocked with propane- and battery-powered equipment and equipped for on-site recharging and refilling.

The crews carry extra charged batteries and use power inverters to recharge on-site using the service vans’ batteries. The trailers also carry two or three extra 30-pound propane canisters to replace used ones throughout the day.

“Our propane provider is Northern Energy. We don’t have to go to them to get our tanks filled. They come to us once a week. They take all the empty canisters and fill our storage cage with full ones.”

DeFilippi buys equipment from several sources to get exactly what he needs. He has purchased hand-held tools and push mowers from large retailers and from manufactures like CORE Outdoor Power.

He turns to his dealership, G&G Equipment, for larger equipment like mowers. Their low-key approach to sales keeps him coming back.

“They don’t try to sell me things I don’t need. I think they are fair in their pricing. They have low-pressure sales tactics and great service,” he says. Mower downtime hasn’t been much of an issue, but the dealership has loaned them equipment when they’ve had a breakdown.

• Dealers can’t know everything about every equipment line. But they must be willing to find the answers, especially when it comes to specialized equipment.

• It’s not always what’s on the lot or in the showroom that earns you a sale. Sometimes, customers need your expertise to find the equipment that best fits their business or properties.

• Keep current on what manufacturers are offering in terms of environmentally friendly technology. It may be a niche market, but can offer new sales opportunities.

For him, an equipment dealership is a business partner.

“It’s important to have somebody you can count on that will take care of you when you need them to.”

DeFilippi says he knows he might be considered a smaller commercial account, for now. “They’re smart enough to know that eventually I could be a large customer.”

Looking for the Next Technology

“There are still no commercial-grade handhelds that will last as long or are as powerful as gas-powered. But, that doesn’t matter to me. My business model revolves around sustainability. I charge a little more to recoup any extra costs,” he says. His customers are willing to pay a 10-20% premium for his services.

“The holy grail to me would be a true commercial-grade, electric hand-held, with battery times longer than they are now. They’re getting better. Companies like CORE are making advances and the technology is improving every day.”

Based on customer demand and interest in environmentally friendly solutions, DeFilippi expects his business to continue growing. “I’m looking for investors to take my company to the next level and enter other markets, like Denver.”

Be a Resource, Not Just an Equipment Provider

Chuck Giefer, co-owner of G&G Equipment in Fredrick, Colo., was a landscaper before he started his equipment dealership with his brother, Will, in 1994. That experience helps him serve commercial customers like Ecological Lawn & Tree Care.

“John has taken the ecological approach to the next level. Some guys do a little bit, but he’s taken it up a whole notch,” Giefer says. His dealership carries Honda Power Equipment, RedMax, Scag, Toro and Walker.

Giefer says his dealership didn’t have equipment in inventory that met DeFilippi’s needs, but that didn’t stop the two from working together.

“He told me what he was looking for and I said, ‘I don’t have all the answers now, but I’ll do some checking.’ I did some research and it was a week or two of back-and-forth conversations and figuring it out,” Giefer says.

G&G recommended Scag and Wright Stander mowers that could be converted to propane and recommended a source for refilling the propane tanks. Giefer also sold him Maruyama fertilizer sprayers.

Their first conversations were in the fall of 2009 and Ecological had its environmental lineup for the spring 2010 landscaping season.

Giefer says there hasn’t been a huge demand from other landscapers for the kinds of equipment DeFilippi is using. He says mowers with electronic fuel injection engines seem to be the preferred direction. To win customers, though, he knows you have to be open to new technology.

“We’re constantly looking out for new options,” he says.