Editor's Note: The Affordable Care Act is evolving as it's being implemented. Rural Lifestyle Dealer will keep you updated on significant changes for dealers.

It's been more than 3 years since President Obama signed the Affordable Care Act and the new healthcare regulations continue to be controversial. In fact, as of late May, Republicans in the House had tried for the 37th time to repeal the regulations.

"When I speak in front of small business groups, they usually walk away pretty upset over what they have heard. There really isn't any good news for them. Health care costs will continue to rise because of the changes in the way insurance can be priced, along with the lack of good health overall of our citizens," says Travis Sinquefield, human resources manager for H&S Companies, a business consultant company based in Grand Rapids, Mich.

Scoop Reif, human resources director for Midwest Machinery, says ACA will benefit consumers, but does have reservations about its long-term effects. Midwest Machinery, a John Deere dealership, employs 200 people at its 9 locations in central Minnesota. It would be considered a large business under the ACA.

"Personally, I'm very glad we're moving in this direction. But there are very few cost containment measures in the bill. It's more about insuring everybody and that's a real problem," Reif says.

Clyde Rodgers, owner of Rodgers & Sons, a Kioti dealership in Cherry Creek, N.Y., says, "All indications are that we are going to have a huge increase in our rates."

Rodgers & Sons is considered a small business under the ACA, with its 7 employees.

Regardless of whether you think the healthcare regulations are good or bad, they are law. Here's what you need to know now.

The ACA is nearly 1,000 pages long, but here are the highlights for dealerships. The required provisions are based on business size. 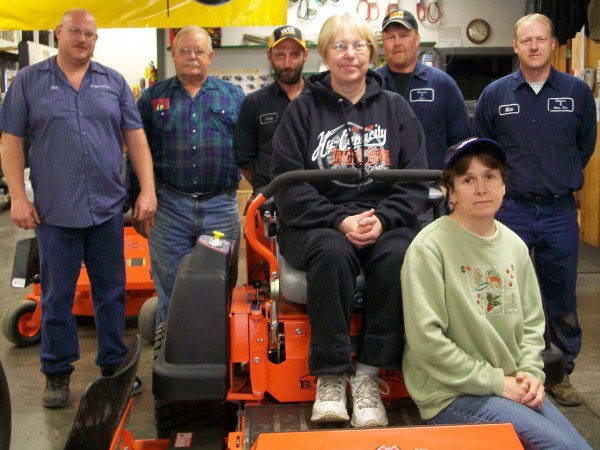 The ACA does not require businesses with fewer than 50 full-time employees (those employees working at least 30 hours per week on average) to provide employees with healthcare coverage. However, if you have fewer than 25 full-time employees, pay average annual wages below $50,000, and provide health insurance, you may qualify for a small business tax credit of up to 35% to offset the cost of your insurance. Starting in 2014, the small business tax credit goes up to 50% for qualifying businesses.

"Before you decide, you need to see where your company falls with this tax credit. It may not be as much as it sounds," says Al Nagel, president of Minnesota Benefit Advisors. For instance, he used a calculator for the state of Minnesota to figure the benefit for a company of 20 employees, with average annual wages of $30,000. The benefit was about $8 per employee.

Employees of these businesses, those with less than 50 employees that do not provide health insurance, may purchase their own coverage through state-based Affordable Insurance Exchanges. Enrollment begins October 1 and the exchanges will be available in 2014.

Small businesses, those with fewer than 100 employees, can also purchase insurance in the Exchanges through the Small Business Health Options Program (SHOP). However, states can limit participation to businesses with up to 50 employees until 2016.

(Updated information regarding requirements: On February 10, 2014, the Obama administration announced it would give medium-sized employers (those who employ 50-99 employees) an extra year, until 2016, before they must offer health insurance to their full-time workers. Firms with at least 100 employees will have to start offering this coverage in 2015. However, these large firms now only have to be able to offer coverage to 70% of their full-time employees (as opposed to 95% as originally required).

Starting in 2015, businesses with more than 50 employees will be penalized under ACA if they fail to provide affordable and adequate healthcare coverage to their employees. (The original deadline for coverage was 2014. On July 2, 2013, that date was moved back to January 2015). In ACA language, that is known as the Employer Shared Responsibility Provisions. Those two words, affordable and adequate, are the basis for possible penalties if they are not met:

Nagel says the calculations again show the increased costs some businesses may face. For instance, here's one scenario: an employee makes $7.50 an hour x 30 hours per week x 4.3 weeks in a month=$967.50 gross monthly pay.

"In that scenario, if the premium is $500 a month, the most they could pay out of their paycheck is $91.90. That means the balance of $409 is the responsibility of the employer," Nagel says. There are substantial penalties for non-compliance.

The reporting requirement could change some managerial functions for businesses. Nagel says businesses don't have to submit coverage reports to the IRS each month, but they do have to keep records and make it available to the IRS upon request.

"Businesses have never done this. This is a lot of added administration. For this piece, I think we are going to see a lot of employers shift payroll from within the company to a payroll firm. It would be smart of them to do that in terms of shifting risk and liability," Nagel says.

Changes That Affect All Businesses

Regardless of your business size, the ACA has provisions that may affect you. For instance, there are new limits on deductibles that can be provided for small market group health plans (less than 50 participants). Right now, those limits are $2,000 for an individual and $4,000 for a family.

"That is up for discussion. We have heard rumors that the limits might be adjusted," Nagel says.

Nagel says there are other provisions of the bill that do not necessarily change what businesses are already providing. For instance, the ACA ends lifetime and annual limits on coverage. It also requires businesses to provide a Summary of Benefits and Coverage for employees. However, non-compliance could now result in a penalty.

Dealers and experts indicate most of their concerns revolve around the potential costs, such as with higher deductibles and higher premiums, which will increase the employer's cost-sharing responsibility.

"Currently, many small businesses utilize higher deductibles because of the lower premium costs. In addition, there are fees and costs being charged to all group health plans that cover costs of running the exchanges and also funding medical research. These add an additional burden on small businesses," says Sinquefield.

Nagel says premiums will also increase because of the new way they will be figured, using a community rating as opposed to a rate table system. He says the rate table system helped insurance companies better manage risk.

"One of the wild cards is what insurance companies will do now that they cannot manage risk," Nagel says.

Also, the mandated health coverage requirements take away the ability to customize individual plans, which also drive up costs, he says.

There are rumblings about companies choosing to sidestep ACA and take on the penalties. Be careful if you're considering this solution.

"Small businesses do not have to offer health insurance but if they chose not to, they must look at the lost tax deductions and the effect on employee morale and where that money previously spent on health care is going to be used," says Sinquefield.

Dealers echo the importance of insurance to their employees.

"We thought about dropping it for half a second and then moved on because insurance is part of our core values and part of our commitment to employees," says Reif.

Rodgers agrees. "I can't face these people and say we're not going to pay insurance. They depend on us."

Rodgers says that as a small employer, he is waiting to hear what may change for him. He's also worried about the ability to keep employees if he can't offer the same kind of coverage and costs that other employers offer.

"I've never had so much uncertainty. I've been through a time when interest rates were at 20%. This scares me more," Rodgers says. "We don't want to lose our employees. They're the greatest people in the world. How do we keep them when we may have to pass expenses on to them?"

Reif says they haven't had to make any changes to their plans to comply with the ACA. However, he will watch to see if that will change.

"This is a moving target. Nobody knows for sure how this will play out. The writers of the act made some broad goals, but we don't have all the details yet," says Reif.

The Minnesota dealership is taking a proactive approach to healthcare costs with a new wellness program. They offer employees and spouses each $150 to take an online health assessment, complete a questionnaire regarding health indicators (cholesterol and weight, for example) and participate in a wellness activity.

"As a result of the assessment you find out areas of opportunity to improve your health. It might be a nutrition program or something called '10,000 Steps,' where you wear a pedometer and agree to take 10,000 steps each day," Reif says.

What Dealers Should Do Now

Nagel says that dealers need to talk with their agents and stay current regarding the changes. Those who haven't yet heard from their agents should contact them as soon as possible to make sure they are compliant.

"It's very important that you have a proactive agent, not just an agent that gives you rates," he says. "The majority of this falls on the dealer. That's the scary part. Who bears the responsibility? Ultimately, it's the dealer."

Sinquefield advises growing companies need to pay close attention to their employee numbers. When they go over the 50 employee mark for full-time employees (working 30 hours a week or more), they need to provide coverage.

Nagel warns that the federal government is hiring many auditors to ensure the ACA is implemented as mandated. He says this could mean more audits for another federal government program, the Dept. of Labor's Employment Retirement Income Security Act (ERISA). ERISA regulates pension, health and other employer benefit programs, such as dental, vision, life insurance and more.

ERISA also contains a clause that says employees have a right to participate in healthcare plans without undo interference. For dealers, this means that cutting hours so employees fall less than the 30-hour threshold is not a way out of complying with ACA. In fact, dealers could face civil and federal penalties for doing so.

Nagel suggests that dealers ask their agents about the possibility of self-funding some of their insurance program. In this arrangement, dealers would be responsible for paying healthcare expenses up to a certain limit and then a reinsurance policy would cover the rest. A self-funding program works best for groups that are relatively healthy. There are risks, but there are rewards.

What Your Customers Need To Know - Safe Operation of Chain Saws