By Lynn Marcinkowski Woolf posted on July 11, 2013 | Posted in Manufacturer News, Best Practices
Pictured Above: In November 2006, Green and Sons purchased a site off Interstate 71 in Mt. Sterling, Ohio. The site offered lots of warehouse space and good visibility and access for rural lifestyle customers. Their grand opening was the following May.

Bill Green and his family added new equipment lines in 2007 after more than 50 years of selling used equipment. The strategy helps them serve rural lifestylers.

The Green family built its business on selling used equipment to farmers and dealers in the Midwest. Now, more than 50 years later, the family has found new success selling new equipment to rural lifestylers from a new location.

“We used to have more of a wholesale operation. Now, we’ve had a retail explosion selling equipment to hobby farmers and homeowners. We never thought we’d be where we are today,” says Peyton Green of Green and Sons, great grandson of the original owner, Bill “Red” Green.

Red and his son, Dick, opened Green and Son in 1971 — just a single “son” at that time — after Dick returned from serving in Vietnam. They built a facility at the family’s home east of London, Ohio. They focused on selling used tractors and implements.

Peyton says his family started seeing changes in the used equipment business about 10 years ago. “It was getting more difficult to find quality used equipment. Farmers were holding on to their equipment longer and not trading like they used to because the equipment is more expensive than it used to be.” 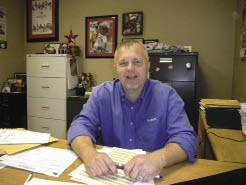 Founded: 1971 as Green and Son. Founder Bill “Red” Green had been selling equipment on his own since the late 1950s.

(In photo: Bill Green and his family added new equipment lines in 2007 after more than 50 years of selling used equipment. The strategy helps them serve rural lifestylers.)

Bill Green adds, “We couldn’t come up with the right products for the weekender guys and the hay guys. The tractors built in the 1970s that were popular in the 1980s and 1990s just weren’t there in 2000.”

In 2003, the Greens began investigating adding a new tractor line to take advantage of the growing rural lifestyle market. The dealership is based near the metro areas of Dayton and Columbus, Ohio.

“There really was only one equipment manufacturer that had the product we wanted to sell and could match our reputation and that was Kubota,” Peyton says.

He explains that they had sold used Kubota tractors and were impressed with their reliability and resale value. “Kubota has one of the highest resale values if not the highest in the market. They also have the reputation for unmatched quality.”

The Greens found out it would take more than desire to add a new line. Kubota representatives expressed concern about the dealership’s location, which lacked visibility and access to higher traffic. That obstacle went away when a location on Interstate 71 in nearby Mt. Sterling went up for sale.

The location was the site of a former semi-trailer repair business. It offered lots of space with its four warehouses, totaling more than 40,000 square feet, as well as good visibility from the interstate. “We’re 20 minutes south of Columbus and just more than 30 minutes east of the Springfield and Dayton areas and right off 71. Once you’re at the exit, you’re here. There’s not even a traffic light,” Peyton says. The location’s downside: “The warehouse was filthy and there were broken down semi-trailers everywhere.”

Bill says the project just needed a vision. “We may not be smart at very many things, but we know when we can make something work.”

Peyton Green is the fourth generation of Green and Sons, an equipment dealership based in Mt. Sterling, Ohio.

The Greens purchased the site in November 2006 and became a Kubota dealer in March 2007. They had their grand opening in May 2007. “Patience is not one of my greatest strengths. You sign on to a big note and you have that clock ticking. There were big expenses with the property and the improvements we needed to make. You see all these buildings, but see no cash flow.”

The family accomplished a lot in just 6 months. The semi repair business moved out its inventory and the Greens began the clean up. They brought in Dumpsters for trash and scrap metal and Bill and Philip focused on designing the layout.

“I made lots and lots of drawings. I tried to make my best guess at how to make the site best serve our needs. There are always things to change, but we hit it spot on,” Bill says. They worked with a local architect and contractors to complete the design and renovate the facility. One warehouse was converted into offices, a showroom and the parts and service departments. The showroom and service department have both since been expanded. A second warehouse stores new equipment and a third is used for refurbishing trade-ins. The fourth warehouse is storage.

Bill says they originally thought about keeping two locations open, since the London location was firmly established among its customer base.

• Be ready to change core business strategies and product lines to adapt to a changing market.

• Do your research when adding new equipment lines. Look at it from the customer’s perspective.

• Taking a risk doesn’t necessarily mean taking chances. Be sure you understand the financial impact of expansions.

The transition from the original site to the new site was straightforward. As soon as the renovation allowed it, they had new equipment delivered to the Mt. Sterling location and also brought trade-ins there.

They gradually moved over other parts, equipment, tools and office inventory. They implemented a new business system with the new location.

“I had been using an insanely simple system. I tracked our inventory in spreadsheets and we hand wrote every invoice. We knew we needed something different,” Bill says. They purchased software from Inventrakk, which is now owned by Ideal Computer Systems. “We’re right on the verge of outgrowing the software because it’s limited to 12 users. At the time, we only had 4 or 5 people using it and we thought we’d never get to 12. Now, we’re right up against the limit.”

The Greens soon started investigating other new equipment lines to expand their reach to commercial landscapers. They added Exmark zero turn mowers in 2008. 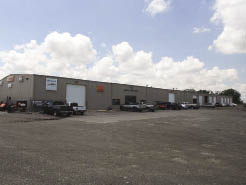 Green and Sons considered leasing out some of this facility when they first moved in. Now, they’re on the verge of outgrowing it.

“We know we need to be malleable about what we are going to offer and we needed something to complement our commercial lines,” Bill says. “We were as green and as uninformed as any couple who has bought their first piece of property. I approached it like an end user who was going out shopping. Every landscape contractor I saw had a trailer with 2 or 3 Exmark mowers so I knew the brand had a tried and true following.”

The Kubota RTV utility vehicle added another way to expand. “When we placed our initial order, I thought we were going to have them as demos forever. I thought it would be good if we sold 5 of them a year and now we’re selling 60,” Bill says.

Two years ago they added a line called “The Farmboy” from UTV Hitchworks, which helps sell Woods and Land Pride attachments for Kubota RTVs. The Farmboy is a 3-point hitch system that uses standard UTV front or rear hydraulics to power attachments. ( Offering the 3-point hitch has helped us sell more attachments. It’s really taking off,” Peyton says.

The Greens adjusted sales philosophies since adding new equipment to their lineup. For instance, Bill says some of the team still feels more comfortable selling used equipment and they’ve had to get used to lower margins on new equipment. 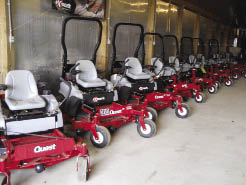 Green and Sons added Exmark mowers to its new equipment lineup in 2008 as a way to expand its reach to the commercial landscaper market.

However, trade-ins add to their used equipment inventory. “We’re getting trades that we used to buy from other dealers.”

The dealership began holding an annual used equipment auction about 6 years ago. What hasn’t sold by year’s end sells at an auction in February.

Bill says the dealership’s growth has the family thinking again about their future. “It can be overwhelming since we really are still a small ‘mom-and-pop’ organization. We’re about to outgrow this facility.”

Peyton adds, “There will always be changes, but we will have the same philosophy that has worked for more than 50 years and goes back to great grandpa: “Be honest and treat people like you want be treated.”