What Rural Lifestylers Want From You: Joe and Mary Niebler

A conversation with this attorney/rural lifestyler and his dealer takes you inside the psyche of these buyers and how you can earn their business.

A round southeastern Wisconsin, Joe Niebler is known as a no-nonsense, hard-hitting business attorney and a real estate developer who's banded together multimillion dollar homes on a picturesque former landfill site.

What many don't know is that he is also a "rural lifestyler" calling home to seven acres on one of the oldest remaining farmsteads in suburban Brookfield, 12 miles west of Milwaukee. In fact, Niebler is a second-generation hobby farmer - his father, also a Milwaukee attorney, purchased 40 acres in the country when Joe was a kid.

Seen from the entry to their barn, Joe and Mary Niebler are proud of their seven-acre suburban "farmstead."

Meet the Rural Lifestyler: The Nieblers

While perhaps not your typical "rural lifestyler," the 64-year-old Niebler has something in common with many of your rural lifestyle customers. After the condescending behavior of a salesman, he left one dealership and never returned. And he put all of his dollars in the pockets of another dealership who gave him the respect he deserved.

Niebler and his wife, Mary, bought their land in 1986, actually making two purchases of 28 acres to protect his settlement from the sprawl of the fast-growing Brookfield community. He developed 21 of the acres into a separate subdivision, and his hobby farm consists of seven acres.

Seen from the road, the property is lined with weeping willow trees. Behind a circular drive is the house (built in 1981) and a former milkhouse that was renovated into a guesthouse attached to the in-ground pool. The 1,100-square-foot air-conditioned guesthouse provides some shade escape for pool guests and is home to a refrigerator, hot tub and big screen TV. Down a couple of stairs are a changing area, full kitchen, bath and bedroom.

Just beyond the house and guesthouse is the crown jewel of the farm, a 1930s-circa barn and silo. Behind the barn is a sloped hill, a perfect tobogganing spot in the winter for the grandkids. Beautifully landscaped with a neatly manicured lawn, it is a property that draws the eyes of every passer-by.

Inside the barn and parked next to his Corvette are his toys: John Deere 4400 with 430 loader, Deere material collector system (for leaves and weeping willow droppings), Western snow plow (for his Suburban) and Curtis snow plow for the tractor, and two Yamaha snowmobiles parked on the Sledbed trailer. On the barn's lower level, you find his Scag Turf Tiger, Mary's John Deere 245 garden tractor and small snowblower. 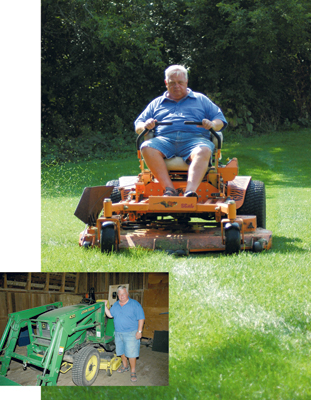 Key among Niebler's equipment are the Scag mower and Deere tractor.

Niebler describes life on his "farm." "The chores, I view it all as recreation," he says. "I've never been one who could go play golf all day on a Saturday. But I enjoy being outdoors and can spend 4 hours mowing though. It's wonderful."

Niebler, who had some experience as a youth plowing, discing, cultivating and haying, had not cut a blade of grass in nearly 20 years when he bought the property. "Today, the mowing is part of my release, my sanity check," he says.

"As an attorney, a lot of what I do is somewhat intangible. Here, I get great satisfaction from the accomplishment of having cut a lawn that really looks beautiful."

Commenting on his prized Scag mower, Joe Niebler recalls that he couldn't have told you what a "Scag" was prior to making his purchase. "I told Mid-States about my frustrations with the grass clippings one spring. I tried a few different things, including a hitch mower, and couldn't get things right. Mid-States' Ken Mehringer said, 'Joe, let's try this mower,' and he said he'd bring it out for me to try."

"It goes like a bat out of hell," he says, noting its power on the hilly terrain. It also took an hour out of the cutting time, he says.

Save the Mechanical Lesson

Niebler says that a lot of rural lifestylers are intimidated when they walk into a farm equipment dealership. Culturally, guys like him are a world away from the farmer, whom the farm dealership model was built to serve.

"I enjoy my time out there cutting, but I have zero-tolerance for mechanical problems that cause the equipment not to work," he says.

Many ag dealers go overboard on equipment features and make the buyer look stupid in the process. "I don't care how the machine works. Do you really care how a TV brings a picture into your living room out of the air? When it doesn't work anymore, I toss it out and get a new one.

"Remember how IBM wanted to make everyone a computer geek? Microsoft figured out that not everyone wanted to be a geek, and made it easy for people to use computers, and things exploded."

For Niebler, he simply wants to know if the machine will do the job for him and that he'll be supported by the dealership's parts and service department. And he abhors shopping, so if you treated him right, you had a good chance to get his business, as has Mid-States Equipment, of Watertown, Wis.

A Tale of Two Dealers

Mid-States, however, was not the first dealership he offered his business to. When the John Deere dealership that his dad frequented for years closed shop, he found another dealership just 15 minutes away and paid them a visit. In Niebler's view, "visit" might have been too friendly a term.

Meet the Dealer: Mid-States Shares its Approach for this Segment

Ken Mehringer, Mid-States service manager, says their approach is all about listening and putting themselves in the shoes of the customer and their needs, whether it's a farmer or rural lifestyler. That's one way your service techs can end up cleaning Joe Niebler's barn for his annual Halloween ball.

As Mid-States thrived while watching its agricultural volume drop from 90% in the 1980s to 40% today, Mehringer shares some observations on things his company has done to succeed with the rural lifestyle customer.

Find the need, then the options. "They have a need but are not sure exactly what it is, or what products are out there. The farmer always knows, and some rural lifestylers do, too. But then there's a guy like Joe who is so busy with his business that he just wants to be out in the yard without any issues."

Don't talk down. "Many are very educated. You don't want to talk down to them. It's about asking about their needs, being able to fulfill that need and asking for the business. Then following up on service."

Not tomorrow, today! "They don't like to wait — they want it now. The rural lifestylers don't ask; they tell me when they want their service. We have a really good crew who is willing to work longer to get the job done. You can't do it without a good supporting cast in sales, service and parts. That doesn't mean we don't get chewed out by the rural lifestyler who must wait until we make sure the farmer in front of him is ready to plant."

Watch the parts counter. "While the ag guys are shooting the breeze with your parts guys, you'll see a rural lifestyle customer who's there on her lunch hour. Sometimes it's as vague as a 'I need a thing-a-ma-jig for my whatchamacallit.' Make sure you recognize them and know their equipment so you can quickly help. And make them feel welcome."

It's worth the effort. "We took a cell phone call from a guy on a train who wanted to price a utility vehicle. It was a busy day, and we could've told him to come in, but we walked him through all his options and he ended up giving us the name of the hotel to fax the order to that night. Another customer drove quite a distance and ended up buying a tractor, tiller, rotary cutter, post-hole digger, front blade and a lawnmower. We weren't the cheapest, he said, but we had listened to him and given him what he needed."

These customers are also well-connected. "We recently had a customer who was always having us service his old Ford tractor and finally talked to him about buying new. Through the financing, he bought a tractor, loader and manure spreader. And because he was on the board of the Milwaukee Polo Club, we also sold a bunch of units for the polo operation as well."

"They made me feel like a second-class citizen. They weren't interested in me because I wasn't going to buy a combine. It doesn't make sense, either, because they were well situated to handle a lot of estates out here," he says.

"Listen, I'm not stupid, and I'm not going to give my money to anyone that treats me like I am because I don't operate equipment for a living or because I have only seven acres. I didn't need the arrogance or irritation."

So Niebler drove off determined NOT to buy from that dealer, instead driving 40 miles from his home to Watertown. What he found upon meeting Ken Mehringer, service manager at Mid-States, was a dealership that respected his business and wanted to take care of him. "Ken treated me like a regular guy," recalls Niebler.

Not surprisingly, that first dealer is no longer in business.

Mid-States Made it Easy

From the way Niebler talks about Mid-States' staff and service, you couldn't get him to switch dealerships even if free equipment was involved. And the appreciation is mutual. Mid-States has a customer who gladly pays shop rate ("never questioned it for a moment," Niebler says), keeps techs busy on regular maintenance programs and leaves his keys for the dealer when he's wintering in Arizona so they can do his work at their own pace. And he pays his bills by return mail the day the invoice is in his hand.

Because Mid-States techs work on the equipment at his place or take it in, they've eliminated a distance problem. Niebler has only been to the store once in the last year, and that was not because he needed to, but because he "felt like kicking some tires."

"The Mid-States guys are terrific," says Niebler, who notes he has no interest in doing any mechanical work. "They service all the equipment here, including my snowmobiles. It's really convenient. They're here in the spring to set up all the mowers, again during the summer to check the blades and back to winterize things in the fall."

On several occasions, they've responded on a dime to take care of a dull blade or a flat tire when Niebler needed to mow to prepare for a party or other event.

When asked for advice he could give to dealers to earn business like his, Niebler replies, "It's simple — treat us like we're real customers. Tell the customer that there aren't any dumb questions. Dealers should let the customer know that they want to fix the customer up with the best equipment for the job you need it to do."

Looking Back at 'What Rural Lifestylers Want From You'