Dealers are again seeing strong growth for the rural lifestyle market, with nearly 84% of dealers expecting revenues to be as good as or better than last year, according to Rural Lifestyle Dealer’s 2015 Dealer Business Trends & Outlook survey. The growth forecast for 2015 is significant especially considering 2014 was already a strong year. 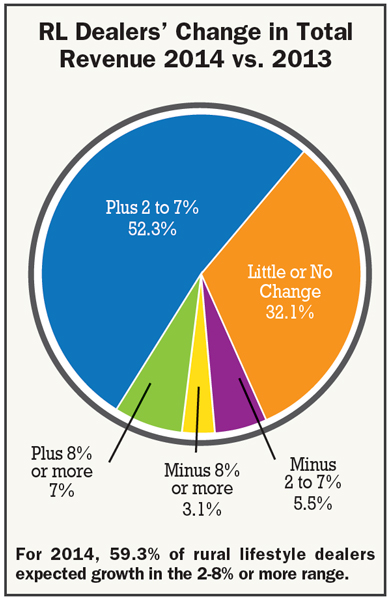 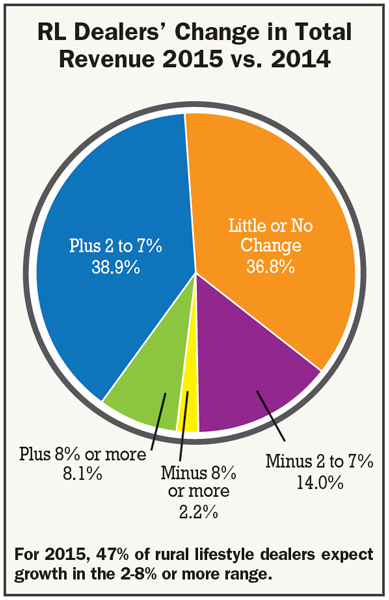 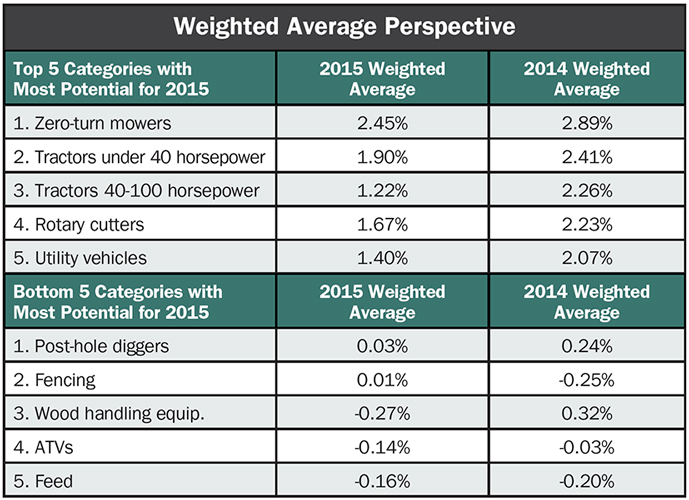 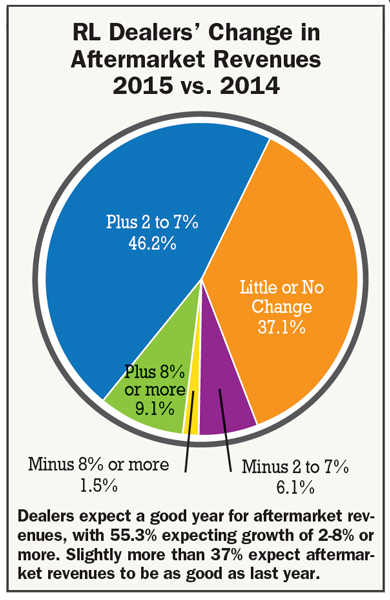 Economic forecasts support dealers’ positive outlooks. Homebuilding trends are a key indicator for the rural lifestyle market and in December, builder confidence in the market for newly built, single-family homes was at 57 on the National Assn. of Home Builders/Wells Fargo Housing Market Index.

Any number over 50 indicates that more builders view conditions as good than poor. “Members in many markets across the country have seen their businesses improve over the course of the year and we expect builders to remain confident in 2015,” says NAHB Chairman Kevin Kelly, a home builder and developer from Wilmington, Del.

Unemployment rates are another factor to watch. Rates have declined 1% since the beginning of 2014, according to the Bureau of Labor Statistics. The unemployment rate released early this January was 5.6%.

After steadily trending lower since reaching 60.5 in June 2013, in November the Rural Mainstreet Index from Creighton University increased to 50 from October’s 43.4.

The rural lifestyle market is the place to be to take advantage of a customer base that continues to grow and to weather uncertainties in the ag economy. Our 2014 Dealership of the Year, Armstrong Implements, has had double-digit sales growth for 3 years selling compact equipment to a traditional agriculture customer base. An Illinois dealer says that farmers in his area are spending money on compact equipment and holding off on purchasing higher priced larger machines. It all comes down to running a solid dealership, says an Ohio dealer: “Control costs while picking up market share by concentrating on the customers’ needs vs. the manufacturer’s desire to just sell the product.”

The rural lifestyle market continues to grow at a rapid pace. Slightly more than 13% of dealers say their market has grown by 20% or more in the last 5 years. That compares with about 7% indicating similar growth last year. And, new dealers are tapping into the market, with 6.8% joining the segment in the last 4 years. Many dealers are already established and 65.1% say they’ve served the rural lifestyle segment for 16 or more years.

The number of dollars being spent is growing right along with the market size. When asked what change they expect from rural lifestyle and landscape customers in 2015 vs. 2014, nearly 84% expect revenues to be as good as or better than last year. In 2014, 91.4% expected steady to increasing revenues for last year. The number of dealers who are very optimistic, expecting growth of 8% or more, increased to 8.1% from 7% last year. However, more dealers than last year think they may face declining revenues of 2-8% or more — 16.2% this year compared with 8.6% last year.

The survey ranks the potential of 26 product categories and for yet another year, rural lifestyle dealers link the greatest revenue potential to zero-turn mowers. More than half of the dealers in the survey (55.9%) expect zero-turn mower sales to grow 2-8% or more. That’s a strong ongoing statement following last year, where 64.9% of dealers forecast similar growth.

The weighted average perspective, looking at the positive vs. the negative forecasts, shows the top 5 categories (zero-turn mowers, tractors under 40 horsepower, tractors 40-100 horsepower, rotary cutters and utility vehicles) as all remaining positive in terms of revenue for 2015.

However, dealers’ level of optimism is slightly down from last year. Tractors in the 40-100 horsepower category had the greatest change in the weighted average perspective, down 1% from last year. (See table on page 10.)

Dealers list post-hole diggers, fencing, wood handling equipment, ATVs and feed at the bottom of the list of 26 categories in terms of revenue potential. In terms of weighted averages, forecasts for these categories, with the exception of fencing, are down from last year, as well.

Like any retail business, top dealers find ways to promote repeat business — and encourage “window shopping.” Keeping inventory fresh with new products is one way to accomplish that and manufacturers oblige by constantly offering new lines and new models. In fact, some dealers say it can be difficult to keep up with the constant stream of models. Regardless, new is necessary and dealers share what they’re planning to add in 2015.

The ag equipment market is coping with lower commodity prices, weak global demand and the increasing value of the dollar, but other economic indicators show opportunities for rural lifestyle dealers, says Ernie Goss, Ph.D., MacAllister Chair and professor of economics at Creighton University.

Goss says rural lifestyle dealers should watch these numbers in particular: wage growth from the Bureau of Labor Statistics (BLS) and 10-year U.S. Treasury rates. The January 2015 BLS report showed that over the year, average hourly earnings have risen 1.7%, which is well below expected and optimum forecasts, according to Goss.

“For the lawn and garden market, there are some real keys with wage growth growing healthier and fuel prices coming down. This could be very important for the buying of consumer durables. They can make do with an old lawn mower, but when things look better, they’ll buy.

“The short-term interest rates are moving a bit higher as we move through the first half of the year — and they could move a bit faster than what we are currently thinking they will do, but the long-term interest rates remain fairly low,” Goss says.

After steadily trending lower since reaching 60.5 in June 2013, in November the Rural Mainstreet Index increased to 50 from October’s 43.4. Goss has published the Rural Mainstreet Index report each month since 2005. He surveys community bank presidents and chief executive officers from Colorado, Iowa, Illinois, Kansas, Minnesota, Missouri, Nebraska, North Dakota, South Dakota and Wyoming. Their feedback is reflected in an index that measures from 0-100. An index below 50 is negative growth; 50 is neutral; and above 50 is positive growth.

“Things have stabilized and numbers are getting a little better off the record lows. We’re probably going to continue seeing much of the same,” he says.

Goss says other issues affecting the ag economy include federal policies related to the EPA’s “Waters of the U.S.” rule of the Clean Water Act, production of biofuels, regulations on rail transport and the administration’s stance on the Keystone oil pipeline.

One concern dealers have raised — finding qualified workers — is something Goss says is a perennial concern in rural areas. Competition for qualified workers from oil and gas companies has made the situation worse. “If oil prices move down to the sub $60 per barrel level and stay there for some time, some of the skilled workers in places like North Dakota may move to other regions.” 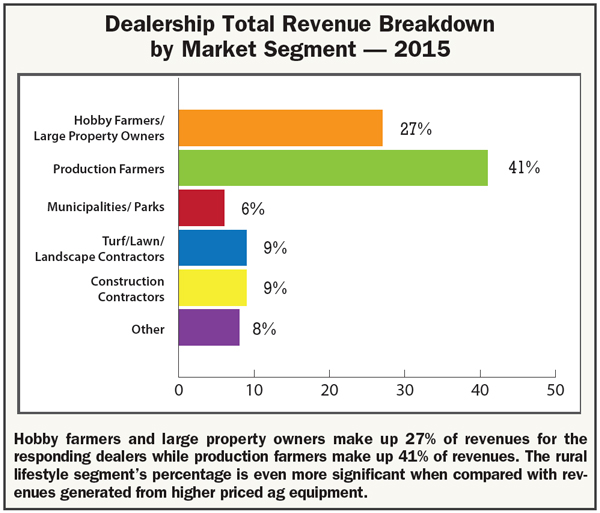 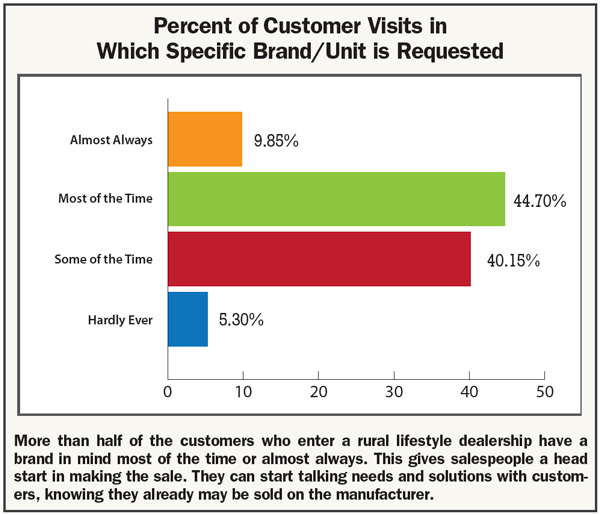 When compared with 2014, the top 5 products to add for this year matches last year, although zero-turn mowers dropped in position.

The jump is justified after extreme winters over the last several years. The 2013-14 winter season, with its brutal polar vortex weather pattern, set new records for snow and cold temperatures. And, this winter season began early with record lows across much of the U.S. in November, followed by record snowfalls — more than 7 feet of snow covered the Buffalo, N.Y., area.

Dealers are also planning to invest at the front of the dealership, with nearly half (45.8%) planning capital expenditures to modernize and improve their retail space. That’s down from last year when about 54% planned similar improvements.

And more investments are on the horizon, with more than one-third of dealers (36.6%) planning capital expenditures for business information systems. Last year, more than half were expecting to invest in dealer software.

These strong investments show that dealers are ready to do what it takes to keep their businesses successful. Investments during years of growth show optimism and commitment to the market for the long term.