The Right Machine for the Job

Third-generation vegetable grower Jeff Hurtgam raises 23 different crops on 35 acres in Ransomville, N.Y. More than 13 tractors and attachments — and the support of several area equipment dealers — help him cope with time constraints and keep up with the different growing seasons.

“The reason why I have so many tractors is that I don’t want to switch attachments. We don’t do a lot of acres all at once, but a little bit here and a little bit there. In the spring we are so busy in the greenhouse that when I get a few minutes, I hop on a tractor and away I go. I also have people working for me, so I can do one job and they can do another,” Hurtgam says.

The operation’s high quality produce and customer service have helped the Hurtgam family maintain long-term relationships with commercial accounts and area consumers. It has supplied one area grocery store chain for more than 40 years and a restaurant for more than 17 years. They sell other produce at area farmers markets, up to 6 days a week during the busy season.

Equipment at the Ready

The farm’s main crops are sweet corn, potatoes, cabbage and peppers. Others include beets, broccoli, Brussels sprouts, cantaloupe, carrots, eggplant, kale, lettuce, pumpkins, squash, tomatoes and watermelon. They have 6 greenhouses that total about 7,000 square feet. Hurtgam starts some plants, such as tomatoes and peppers in the greenhouses, as well as starter plants for other smaller growers. They also raise vegetable plants in 6-pack containers to sell at farmers markets.

Jeff Hurtgam is a third-generation vegetable producer in Ransomville, N.Y. He matches tractors to particular jobs and has attachments ready to go. This helps him get fieldwork done during times when he’s also busy in his greenhouses.

Hurtgam begins fieldwork in early April. “I use a 4-bottom John Deere plow and because the ground is so light and sandy I use a cultipacker (Brillion). I then use a Kongskilde field cultivator to finish the soil preparation.” Based on soil condition, he also may use a 10-foot Athens disc.

His plowing tractor is a New Holland Tl70 that he bought used from Niagara Frontier Equipment Sales in nearby Lockport, N.Y. “My dad bought that tractor. It was a ‘town’ tractor that was used for mowing. It was almost brand new and had very low hours.”

He turns to a Case IH JX1070C for field cultivator work, which he bought new in 2007 from Lamb & Webster. The dealership has 3 locations in New York and 1 in Pennsylvania. His other main tractor is a Kioti RX6010 that he bought in 2012 from Niagara Frontier.

“I had been using an old Massey Ferguson for spraying insecticide and fungicide and it didn’t have a cab. I knew Justin and he said I should give Kioti tractors a try,” Hurtgam says referring to salesperson Justin Adams from Niagara Frontier. “He brought it out and I tried it and the price was good.”

He was able to add a loader, thanks to a Kioti promotion. He also uses the Kioti to pull a specialized piece of equipment that rolls out plastic (for a weed barrier) and drip irrigation tape and shapes beds. 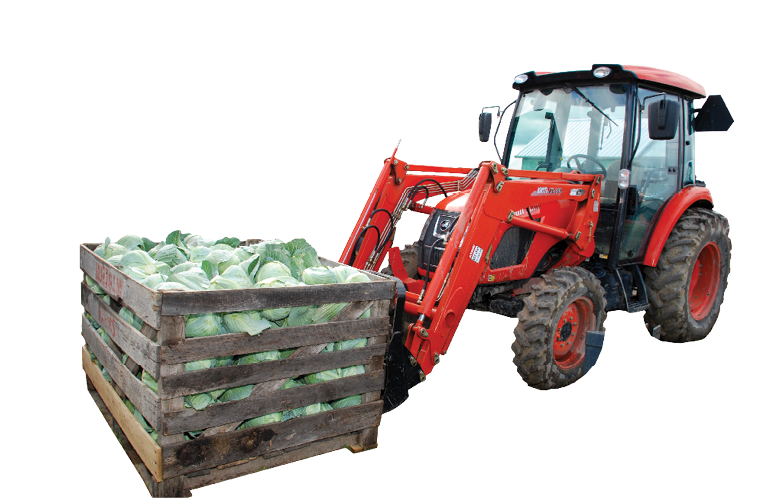 Jeff Hurtgam purchased his Kioti RX6010 in 2012 from Niagara Frontier Equipment, Lockport, N.Y. He says the tractor is quiet, easy to use and was affordable. The deal was made after salesperson Justin Adams let him test the tractor on his farm.

Hurtgam uses another tractor, a Kubota 4900, for planting starter peppers and zucchini plants. He purchased that tractor from Lamb & Webster in 2004 and uses it with another specialized piece of equipment that pokes a hole in the plastic and adds starter fertilizer. Hurtgam or an employee sits on the equipment to place the plants.

He has two other older Kubota tractors, a 4610 and 4200, which he bought from Niagara Implement, which has locations in Newfane and East Amherst, N.Y. He uses those to pull the potato harvester, for miscellaneous farm jobs and for pumping water from the farm’s pond to the overhead sprinkler and pipe irrigation systems. He uses a Case IH JX60 that he bought in 2008 from Lamb & Webster for miscellaneous farm jobs.

“A lot of our main tractors were bought within the last 15 years because we wanted to update equipment. I like to work with good equipment because I can’t afford not to. It’s nice to have equipment to use if a tractor does go down,” Hurtgam says. He’s happy with his current equipment and doesn’t expect to purchase tractors for about 4 years or so. 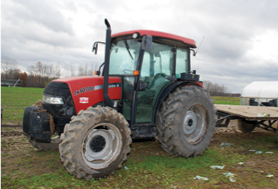 A Case IH JX1070C is used for field cultivator work on Hurtgam Farms. Jeff Hurtgam worked with Jim Miller of Lamb & Webster, a dealership with 3 locations in New York and 1 in Pennsylvania. The relationship dates back a generation as Miller worked with Hurtgam’s dad, Jerry. Hurtgam also owns a Case IH JX60 that he uses for miscellaneous farm jobs.

“I’m very specific with what I buy and not any tractor will do. It has to meet a need. It has to do what I need it to do — and then some.”

He also has several older tractors like an International 140 and an International Cub tractor that he plans to keep, despite being close to 40 years old. Hurtgam uses the International 140 to plant potatoes with a one-row planter and he uses the Cub to cultivate potatoes, corn and cabbage. The two tractors also pull trailers. He also owns two 2007 Gator utility vehicles he uses every day for traveling around the farm or pulling trailers.

Hurtgam says this about why he works with several dealers: “There’s no one dealer that has everything I need. That’s very obvious. There’s a pool that I draw from.” 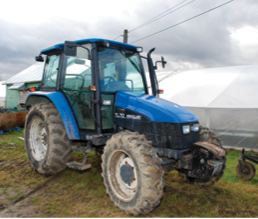 Hurtgam bought this New Holland Tl70 used from Niagara Frontier Equipment Sales and uses it for plowing fields ahead of planting corn, cabbage and potatoes.

His dad, Jerry, who passed away in 2012, established many of his current relationships with dealers. For instance, his dad had been working with Niagara Frontier since the early 1990s. When it was time to purchase a new disc, Hurtgam returned to the dealership and started a relationship with Adams. Hurtgam says Adams was new to the sales team at the time, but always followed up if there was something he couldn’t answer.

He says the loader promotion in 2012 persuaded him to take a look at Kioti. “With the Kioti, price had a lot to do with my decision to buy, but Justin told me, ‘I’m telling you. You’re going to like this tractor.’

“There were a couple of things I did like. It was really quiet and easy to operate. The controls all seemed to be where they should be. A lot of thought seemed to be behind how they engineered the tractor and it has done everything I wanted it to do.” 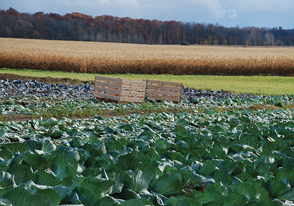 Hurtgam Farms has been growing vegetables, such as cabbage, corn and potatoes, for three generations. The family recently upgraded tractors and other equipment and is now rebuilding the farm’s original barn.

Hurtgam says he doesn’t remember how he began working with Jim Miller from Lamb & Webster, but his first purchase was based on the dealership beating a competitor’s price.

“I like Jim because he’s a straight shooter and he’s honest. I told him that I was looking for a tractor with 70 horsepower, front-wheel assist and a cab. I told him, ‘If you ever get something that’s used but still in good condition, call me.’ ” That was how he bought the Case IH 1070C.

Hurtgam says he needs to be sure that the tractors will work with his specialized vegetable equipment. “I’m at the point now where I would seldom buy a tractor unless I try it out on my farm first.”

Hurtgam does most of the basic servicing on his tractors, but

occasionally turns to a dealership’s service team. “Niagara Frontier has a good mechanic they put on the road. That means a lot to me.” 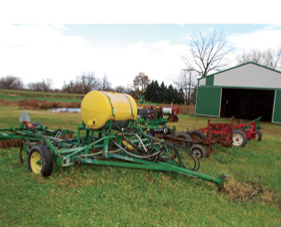 Jeff Hurtgam relies on numerous traditional and special purpose attachments to grow vegetables that he sells to grocery stores, a restaurant and at farmers markets.

Staying on the Farm

Hurtgam graduated from Cornell Univ. in 1994 and immediately came back to work on the farm his grandfather started in 1921. Today, he and his wife, Harmony, and their two children, Abigail and Nathan, live in the house he grew up in. His mother, Brenda, lives next door. He serves as a trustee for his church, is on the town planning board and was just elected to the town council.

“I had opportunities elsewhere. I had a job offer with a seed company in California. I turned it down and came back to the farm,” Hurtgam says. “My heart has always been on the farm. I do enjoy it. Most days I don’t think of it as work. It’s just my lifestyle.

What Rural Lifestylers Want From You: The Right Machine For The Job

The Right Product at the Right Time

The Big Picture: Why The Customer Is Not Always Right And Why It Doesn't Matter