Branson Tractor has big goals for the next 5 years — to double its business. Dealers who deliver what they promise to customers will be instrumental in that growth, says Ted Kim, president of Branson Tractor Co., U.S.A.

Branson was founded in the U.S. in 1998 as a tractor distribution company for Kukje Machinery Corp. of South Korea. Kukje was established in 1966. Branson has headquarters in Rome, Ga., and warehouse, assembly and distribution centers in Texas and Oregon.

Kim recently shared with Rural Lifestyle Dealer what’s ahead for the company. “Our rolling 5-year plan, which we’ve been focusing on for over 2 years, involves more than doubling our business in the next 5 years,” he says. Branson’s dealer network now includes 175 dealers and their goal is to add 25 dealers each year.

Branson offers five series of tractors in the 24-80 horsepower range and the company plans to continuing focusing on that segment. “Our ‘bread and butter’ comes from 24-65 horsepower tractors. You’re not going to find us doing an introduction for a 120-horsepower tractor and that’s on purpose. You don’t want to say ‘never,’ but it’s highly doubtful that you’ll see us going smaller than about 24 horsepower in the near future either,” Kim says. “We focus on the industry markets by horsepower class in every state, down to the county level. Then, we do our best to be the best.”

In today’s market, any increase in sales is going to come at the expense of someone else, Kim says. “The major manufacturers have the advantage of brand recognition. That doesn’t mean they build the best tractor. They have the biggest share of the market, but we’re doing very well with our strategy.” 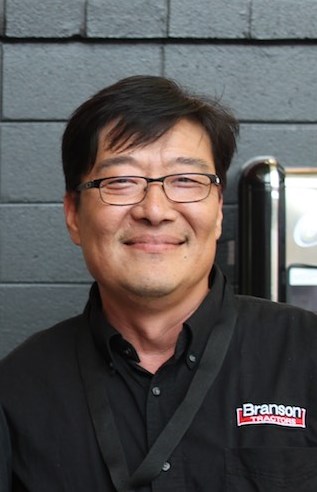 Last fall, Branson introduced three new models, 3015R, 3515R and 4015R. “The wheel base is a little smaller than our 20 series tractor (65.78 inches), but they are larger than the usual sub-compact frame,” Kim says. Earlier this year, Branson introduced a hydrostatic version of the 15 series. The models are targeted to those customers who face maneuvering restrictions for certain jobs, such as inside a barn, or for customers who don’t want a tractor as heavy as the 20 series.

This spring, Kim says the company will be introducing refinements to its loaders and backhoes.

Earlier this year, GE Capital Commercial Distribution Finance and Northpoint Commercial Finance extended their inventory financing program with Branson through 2019. The extension of the current agreement will be used to continue support of wholesale floor plan financing for dealers on compact tractors, backhoes, loaders and mid-mount mowers.

Kim says consumer purchases are driven by rebates, 0% financing programs and dealers who know their business.

“People don’t always buy the lowest price. A good salesperson can explain why something is worth more, the usable benefits that your features provide and the value of your dealership. Know the features and know the reasons behind what makes your product what it is. You have to be well-versed for this information to flow naturally,” he says.

“Achieving and maintaining good, profitable margins is absolutely possible if you do the right things right. That is our driving force — the profitability of our dealers,” Kim says.

Success is also based on common sense and good business practices. “People have gotten used to the fact that many people don’t do what they say they’re going to do. Do what you say. It’s a competitive advantage and it doesn’t cost you anything. Besides, it’s the right thing to do,” Kim says.