Above: Tractors from 22-39 engine horsepower with a variety of options were unveiled at Mahindra's 2015 National Dealer Meeting.

Entrance into the North American hay equipment market and a vow to double dollar volume in the next 5 years highlighted Mahindra’s National Dealer Meeting, held recently in Kansas City, Mo.

The surprise at the meeting came when Mahindra announced its entrance into the North American hay tool market in 2016 through a partnership with Italy’s Maschio Gaspardo Group. The offering, scheduled to ship to dealers in February, will include 2 models of disc mowers and 2 models of hay rakes. The company had introduced a 4 x 5 baler at the meeting, but decided to withdraw the product line due to dealer feedback. 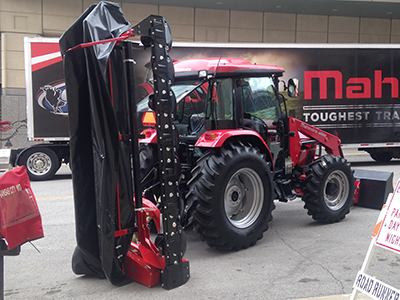 At the small end of Mahindra’s new tractor line is the eMax S sub-compact at 22 and 25 engine horsepower, featuring steel hoods and fenders, a heavier duty frame for loader and backhoe installation and side-by-side hydro control pedals. The 22 horsepower model is offered in gear drive for the budget-minded consumer, the eMax S 25 can be ordered from the factory with a cab and heat (air conditioning is not an option).

The Mahindra 1526 marks the company’s entry into the market just under the 20 kw Tier 4 limit, with the same engine as the larger framed Max 26XL. Among the features of this new tractor is a choice of 8 x 8 shuttle transmission or 3 range hydrostat, live PTO and skid loader-compatible quick attach loaders.

The final tractor debuting at the meeting was the 2538 at 38.7 engine horsepower, available in hydrostatic drive only, with optional cab, heat and air conditioning. This model, as well as all of the company’s Tier 4 compliant tractors, uses the new mCRD design or Mahindra Common Rail Diesel engine family that avoids the use of diesel exhaust fluid (DEF) or diesel particulate filters (DPF) widely used by competitors. The company opted for a ground-up engine redesign that uses a diesel oxidation catalyst (DOC), a catalytic converter for diesel engines, using palladium and platinum to oxidize hydrocarbons and carbon monoxide into carbon dioxide and water. The new design avoids the regeneration process inherent with DPF-equipped engines. 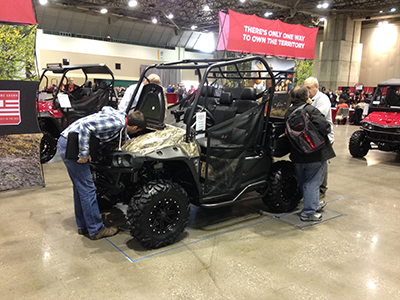 Mahindra now offers camouflage versions of both the 750 and 1000 utility vehicle mPACT models to appeal to the hunter segment of the UTV market.

The Mahindra mPACT XVT line of utility vehicles was introduced earlier this year and the company unveiled 7 additional models at the national dealer meeting. They include camouflage versions of the 750S and 1000S, which are 3-passenger machines, and 750C and 1000C, which are both 6-passenger models. There are also the 750S and 1000S models with the “Flexhauler” option, a smaller version of the long bed machines with fold-down sides to convert from a box bed to a flat bed. A limited production 750S Special Edition was also unveiled — a sporty version with gloss black plastic, red rims and red accents.

In addition to doubling dollar volume, the company wants to become one of the world’s most respected brands. Mahindra reports they are now third in market share in North America in the 0-120 horsepower range.

Mahindra entered the U.S. in 1994 with a 2WD tractor resembling an older-style International Harvester. It was built through a previous partnership with IH that began in 1963. The company quickly recognized the vast potential of the North American market. Expanding and updating the products they built, and forging partnerships with other equipment companies to provide additional models to fit the market, they began setting up dealers and retailing tractors. Selling largely under the radar of the major farm equipment makers and claiming some of the heaviest tractors by weight the company sold large volumes of machines, mainly in the economy segment. Worldwide, Mahindra claims to be the number one selling tractor brand by unit volume, owning nearly half of the huge Indian tractor market.

Now a recognized tractor brand, the company hopes to expand its presence in more tractor segments and with complementary products and additional distribution.

With a nearly $18 billion parent company, a player not only in agriculture, but also automobiles, aerospace, computer technology, scooters and electric bicycles (models were on display at the meeting), Mahindra has the assets to continue its rapid growth. Whether a few more tractor models, some utility vehicles and diving into the hay tool market can get them to the goal of doubling revenues remains to be seen. But as one dealer attending their national dealer gathering said, “They’ve made audacious goals at most of their meetings and have never failed to meet any of them.”

Mike Wiles writes the "Managing the Store" column for Rural Lifestyle Dealer and is a contributing writer for RLD and Farm Equipment magazines. He has been in the retail and wholesale equipment business for over 20 years. He co-owns EDMforsales.com, which develops websites for dealers and hosts asktractormike.com to educate new tractor customers.