Small business owner Bob Garner found a piece of property that was literally worth moving over the mountain for. He had heard that a cattle ranching family's estate plan included the sale of 600 range acres. Catching wind of the sale, Garner walked away with a 75 acre-homestead, which included a 1,500-foot peak on which you can see the Pacific Ocean 7 miles away.

Other than the fact that his wife, Deb, rode horses as a youngster, the couple was getting its first touch of rural life with the purchase.

Initially, the family used the property for camping on weekends. "It was still basically an open cattle range," he said.

"We learned that the first order of business was fencing off the property, otherwise the cattle left their calling cards all over the place. Neighbors who didn't do the fencing early learned the lesson the hard way. When they came up on the weekends to check on their home construction, they saw cattle in their newly framed-up living rooms."

Before Garner could build his 4,000-square-foot home (that would eventually go up in 2003), he had plenty of work to do for land maintenance and landscaping. Having owned a 16-hp Kubota garden tractor in the suburbs, he soon decided on a 29-hp Kubota L35 tractor — packaged together with a backhoe and loader — and chased that purchase with a box scraper, post-hole digger and roto-tiller over the next 2 years. 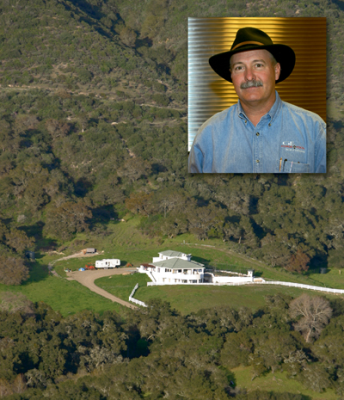 Property: 75 acres (5 which are usable land) in the Cuesta Grade Mountain range of central California, 7 miles from the Pacific. Home built in 2003 is 4,000 square feet and valued at $3 million.

In 2006, he purchased a rotary cutter to better clear the chaparral on the property, and last year, purchased a Kubota RTV with hydraulic dump capability. It is truly a utility vehicle on Garner's land, who called it the best wheelbarrow he's ever seen. "It's great for handling horse manure, landscaping, moving rocks, fixing the fencing and general farm maintenance," he says. It's also a recreational vehicle, as he and his wife often make the 10-minute drive from their house (at 600-foot elevation) to the 1,500-foot peak to share a sunset overlooking the sea 7 miles away.

While the ability for a quiet retreat drew the couple to the land ("the silence is deafening out there," he says), he's found great delight in working the land, too. "It's very satisfying," he says. He cites grading his dirt roads and using the backhoe to dig trenches for plumbing, electric lines and septic tanks as his most enjoyable tasks. Plus, with his history of making tools (he owns a tool-making operation in Grover Beach, Calif.), he gets to exercise his mechanical abilities in a new way. "Working out there is therapeutic, almost recreational at times," he adds.

When asked about his equipment purchases, Garner says he's spent more than he cares to know, but has no regrets — they're all purchases that add to his enjoyment of his investment in the property. With 100% of his neighbors also living the rural lifestyle, there's also a fair amount of equipment swapping, which allows him to test and use other types of equipment, like the flail mower he regularly borrows in exchange for his rotary cutter and roto-tiller.

While his neighbors' collection of implements varies, all bought a tractor as one of their first purchases. "We could host a tractor parade right up on the mountain," he says.

When Garner moved over the mountain, he figured he'd find another dealer that was closer and more convenient that C&N Tractors (see article on p. 21), at which be previously bought his garden tractor. What he soon found, however, was that not all dealers were created equal. After a couple interactions with the new dealer he decided traversing the mountain was indeed worth the effort.

When asked about his experience at the new dealer, Garner says, "They made me feel invisible. I went in there just looking for parts, as I could do most of the service myself. So I stand there at the counter, people working all around me without any acknowledgement. All of a sudden, a big ag customer comes up and the dealer people stop, say hello, joke with him and say they'll be right with him."

Despite the poor customer service, he still brought in his tractor for service when the clutch failed. When he came to pick it up, he had to wait as the techs had trouble starting the engine before loading it onto his trailer. When he got the tractor home and looked things over in daylight, he saw that they put the low-strength bolts in the wrong place and washers were even spinning. "I took care of it myself, and then called the store to let them know about the problems.

"They apologized and assured me that I was an important customer to them. But looking back, all they did was glad-hand me, and didn't even fix the list of things they said they would."

Garner talked with his neighbors and found they had similar experiences with the local dealers, who seemed more interested in the bigger, production ag customers. So, he returned to C&N Tractors. "Now, I'll drive 45 minutes over the mountain to do business with C&N," he says.

While Garner does a lot of product research on the internet, he puts great stock in the trusted relationship he has with C&N. "A few years ago, I planned to buy a flail mower. But once the guys at C&N took the time to understand what I needed to do — clear chaparral and sage on my hilly ground — they recommended a rotary cutter instead. They told me I can back into brush with the rotary cutter easier and knock down stuff that I wouldn't be able to with a flail mower."

And because C&N has taken the time to know not only Garner's land, but Garner himself, he's avoided some poor decisions. "I wanted to buy the plastic toolbox accessory for my RTV," explains Garner. "The salesman, who knew me, refused to sell it because he said he knew I'd overload it with all my tools and end up busting it. He told me to weld something up myself, which I did. I appreciated his advice, and he took some money out of his pocket by being honest with me."

And while he enjoys servicing his own equipment, C&N techs are there when he needs them. "When I need them to come out, they schedule it with other visits in the area and take care of the RTV and tractor at the same time." While Garner can't even recall what he's paying for their onsite service, he adds that "whatever it is, it's a good value."

And, he's not done with his purchases yet. With all the road-grading and maintenance on his hilly property, he expects a small bulldozer to be his next purchase.

Bob Garner is different from most rural lifestylers in that he is capable of, and enjoys doing, his own equipment service. But when he looks at the biggest opportunity dealers have in the rural lifestyle segment, he's convinced that it's those who concentrate on service that will win.

He estimates that at least half of his neighbors (which include among other professionals, an Oscar-nominated film editor) are not mechanically inclined. They have the equipment and the income, he says, but little time to turn wrenches on their own equipment, even if they know how.

"One of the things C&N does well is sending a service reminder post card and then following it up with a phone call," says Garner, who notes that his equipment can sit for weeks without any use before seeing full-day use for a weekend. "I appreciated the contact, as I'm usually not even thinking it might be due. They told me to how to check the hour meter and helped me figure out when the tractor and RTV really needs to be serviced."

Second, he says demos are important to most rural lifestylers, particularly when the user is unfamiliar with the new equipment, such as he was with the backhoe. "I took the backhoe as part of the package just because I knew I was getting a great deal," he says, admitting he wasn't sure what he'd end up doing with it. "I just spent a bunch of hours digging holes until I figured it out. Now I'd never want to be without it."

Green Acres is the Place to Be, WSJ Says