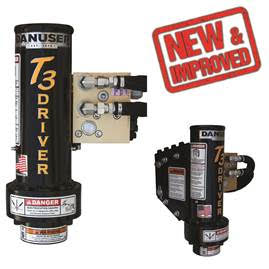 The new and improved T3 Driver is a small driver that delivers big-time results. Drive T-posts, up to a three inch O.D. (outside diameter) pipe, at a rate of up to 6 strikes per second. Unlike hand-held drivers, the T3 Driver attaches to the tractor, skid-steer, mini-ex, loader or backhoe to carry the weight of the driver.

“The new hydraulic manifold means the T3 Driver operates on vehicles with hydraulic flow from 0-30 GPM, similar to the Hammer Post Driver,” says Glenn Danuser, co-owner of Danuser.  “It has a simple plug and play operation.  Hoses and couplers can now be interchanged without affecting the performance of the T3 Driver. The improved lower housing design features seven  half-inch bolts as opposed to the previous design’s five three-eighths-inch bolts. More threads per inch allow for increased strength and better engagement.”

“The new T3 Driver also has increased weld sizes on the housing, from three-eighths-inch to half-inch, and an added gusset for a more robust design.  Lastly, the enhanced strike plate is round, which reduces binding, wear and maintenance, as well as increases durability.”

Danuser’s T3 Driver is now stronger, more efficient and more durable than ever. The new upgrades to the driver allow the user to put more T-posts in the ground, faster. The T3 Driver’s functionality and updates include:

Danuser offers several versatile mounting options, including an offset skid-steer quick attach, which allows the operator to drive parallel to the fence line, and a bolt-on/weld-on bracket that mounts to almost any flat surface. All of our mounting options are designed to withstand substantial down pressure from the host vehicle, which means the operator puts more posts in the ground faster. Stop driving posts by hand, and get the job done quickly with the Danuser T3 Driver. To learn more about the T3 Driver, visit Danuser.com.