By Sierra Wolff posted on November 1, 2018 | Posted in Manufacturer News

AriensCo recently celebrated the production of its 4 millionth Sno-Thro unit, along with marking the rebranding of the 85-year-old company and the launch of Brillion Works, a 140-acre development.

“Four million machines is no small task, but behind these numbers are the visions, the trials, the hard work of many, many people” says Dan Ariens, CEO of AriensCo. 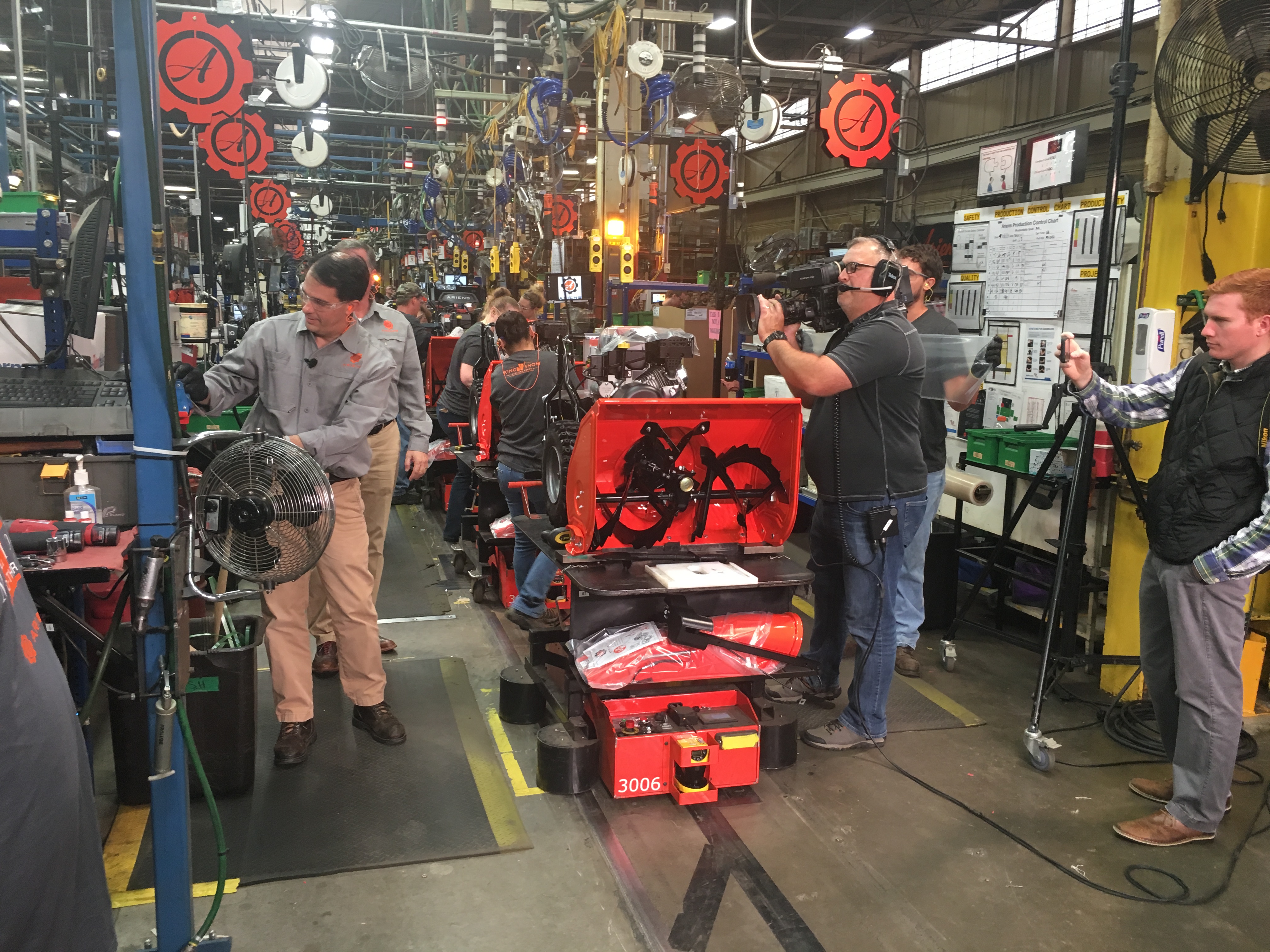 After congratulating the Ariens staff on the production of 4 million Sno-Thros, Wisconsin Governor Scott Walker helped assemble the first machines toward 5 million Sno-Thros. He also declared October 1 to be Ariens Sno-Thro Machine Day across the state of Wisconsin.

The company was founded in 1933 as the Ariens Co. and the new branding, referred to as an enterprise brand, reflects the company’s multiple brands, including Ariens and Gravely and two brands based in the U.K., Countax and Westwood.

The Brillion Works project will redevelop the former Brillion Iron Works, a foundry and farm implement manufacturer, in the company’s hometown of Brillion, Wis. Brillion Iron Works was once owned by AriensCo founder Henry Ariens before losing it during the Great Depression. That loss spurred him into building the company’s first rototiller in his garage and eventually expanding into snow blowers. Now, the Ariens family and company have come full circle.

“I think it's really great for the family,” says AriensCo President Larry Weyers. “They lost it in the Depression, and he bought it back.”

Weyers says Brillion Works will benefit the company, their dealers and the community. The former Brillion Iron Works facility will be turned into Rapid Care, an initiative that is part of the company’s aftermarket service training. Another building on the property has been refurbished and the manufacturing, engineering, support and aftermarket business has been moved there.

“You never know what's going to be down the road — what a snow blower will be like, what a lawnmower will be like — but for sure, Ariens will be in the middle of it,” says Weyers.

Over the last year, AriensCo has put a larger focus on producing more machines with a smaller manufacturing footprint. To do this, they shut down their Auburn, Neb., plant and made changes at the Brillion manufacturing facility. Today, production of zero-turn mowers in the plant in Brillion has increased from 200 daily to 400 daily, with the same number of employees. This increase provided the flexibility for the plant to take on producing snow blowers as well. “When you increase that capacity, it means you need less fixed costs,” says Weyers. “We had the expertise, the design and the engineering here, so we didn't really need the plant in Auburn.” 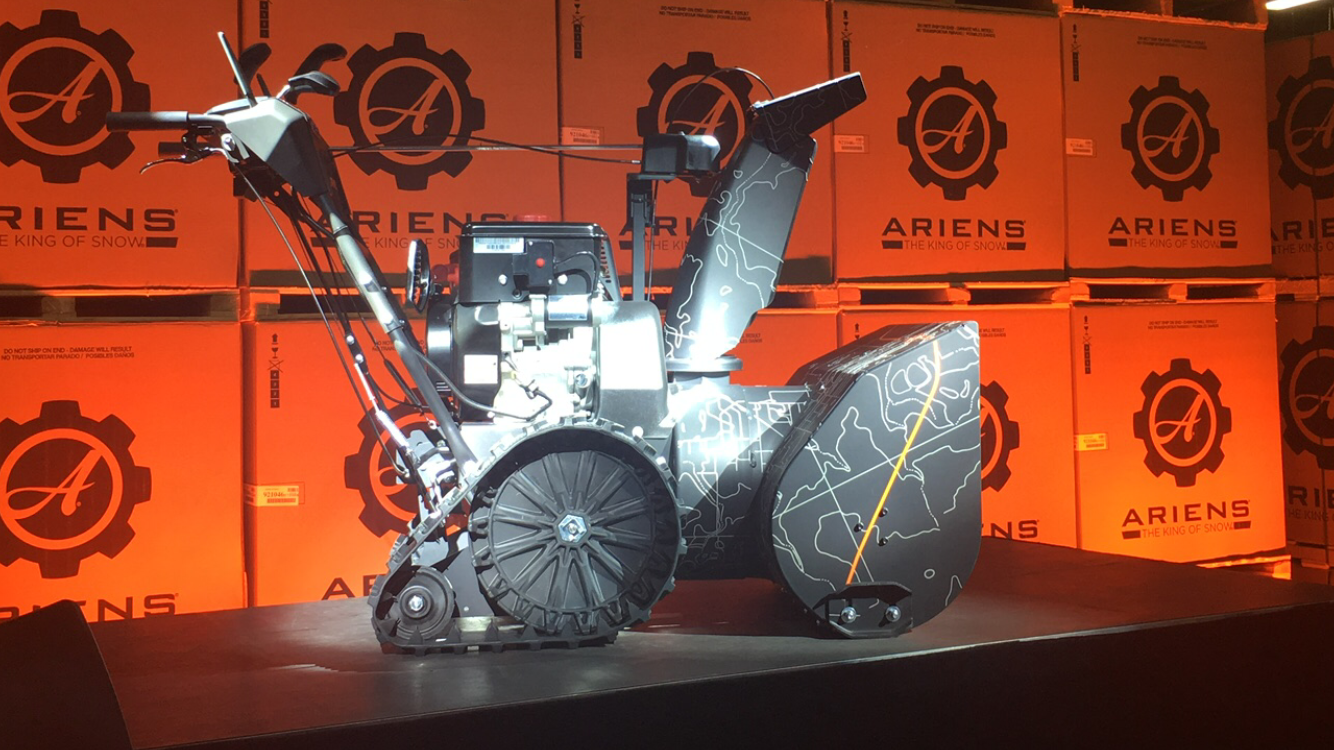 The Ariens marketing team was given creative reign to design the 4 millionth Sno-Thro. They chose to honor the town of Brillion by painting the machine matte black and placing a topographical map of the town on it.

AriensCo Sno-Thro machines usually come in the well-known orange color and about 2,700 tons of orange paint has been used throughout the production of the 4 million units, says Ariens. However, to commemorate this milestone event, the marketing team was given creative reign over the design. They chose to honor the town of Brillion by painting the machine matte black and placing a topographical map of the town on it.

“The design is intended to recognize that our units are used by hometown heroes all over the continent, all over the world. When someone starts blowing snow, they end up blowing snow for the whole neighborhood. They start, keep going down the driveway, then keep going down the sidewalk, and they end up taking care of all the neighbors, and we call them hometown heroes,” says Ariens.

The company donated Sno-Thros to organizations recommended by the employees, including Honor of Flight Wisconsin, the Fox Valley Humane Society, the Alzheimer’s Assn. and the Billion Fire Department.