Larry Stovesand is an auto dealer, who was urged by Mike Schramke, a former car salesman of his and now business partner, to open a tractor dealership in 2015. Schramke says that focusing only on the KIOTI line has led to its fast success, including earning the top U.S. sales award from KIOTI Tractor in 2017.

Neither Stovesand nor Schramke had previous experience with tractors, but recognized a good business opportunity. Schramke had worked for Stovesand for many years at one of his auto dealerships and later handled sales at a tractor dealership.

“I started becoming aware of the KIOTI brand. I investigated the machinery and the company itself and became very interested in it. There was a large void in the Nashville metro area for that brand, so I approached Larry and said, ‘Would you like to get in the tractor business?’ And he thought it sounded like fun,” says Schramke.

They were ready to take on a new venture, but did due diligence in verifying the quality of the brand, including reading customer reviews. This was Stovesand’s first venture in carrying a non-U.S. based line, so they also researched working with a Korean-based company.

“Early on, I thought, like so many people, that everything’s made in Moline, Ill. I started looking at Google reviews and the product quality seemed impressive. And I started seeing how South Korean companies were prospering all across the spectrum, whether it’s an LG refrigerator, Samsung phone, Hyundai automobile or Doosan Excavator,” he says.

Stovesand Equipment opened its first location in Murfreesboro, Tenn., (south of Nashville) and the dealership was successful enough that a second location was added in Springfield, Tenn. (north of Nashville) in March 2018.

They chose Murfreesboro because of its rural customers, its proximity to a large metro area and because there was limited competition. They moved into a 10,000 square-foot facility that had been a forklift dealership, so it had a large shop with large doors and a good retail space.

Here’s his view on the dealerships he was competing with: “My parts and service director, Jim Wilcox, and I drove to the John Deere and Kubota dealerships. At the John Deere dealership, we were waited on in a timely fashion and treated very respectfully. I thought , ‘Okay, these guys know what they’re doing.’ At the Kubota dealership, we were out on the lot for 25 minutes, sat on a bunch of equipment and then left. And that did it for me. I said, ‘We only have to be better than that guy, which isn’t hard.’ And it has proven true,” Schramke says.

Schramke says it was a smooth transition from cars to tractors. “It’s like working at a toy store. Everybody likes toys and everybody likes tractors. There’s not an automatic adversarial positioning that you would find at an auto dealership. It’s just a matter of learning the product.,” he says.

For Stovesand Equipment, that product is KIOTI tractors, attachments and implements. “We don’t sell any other brands, nor will we,” Schramke says. They believe in a full inventory, carrying nearly 140 tractors between the two locations, plus a full array of implements, thus avoiding the need to special order equipment. 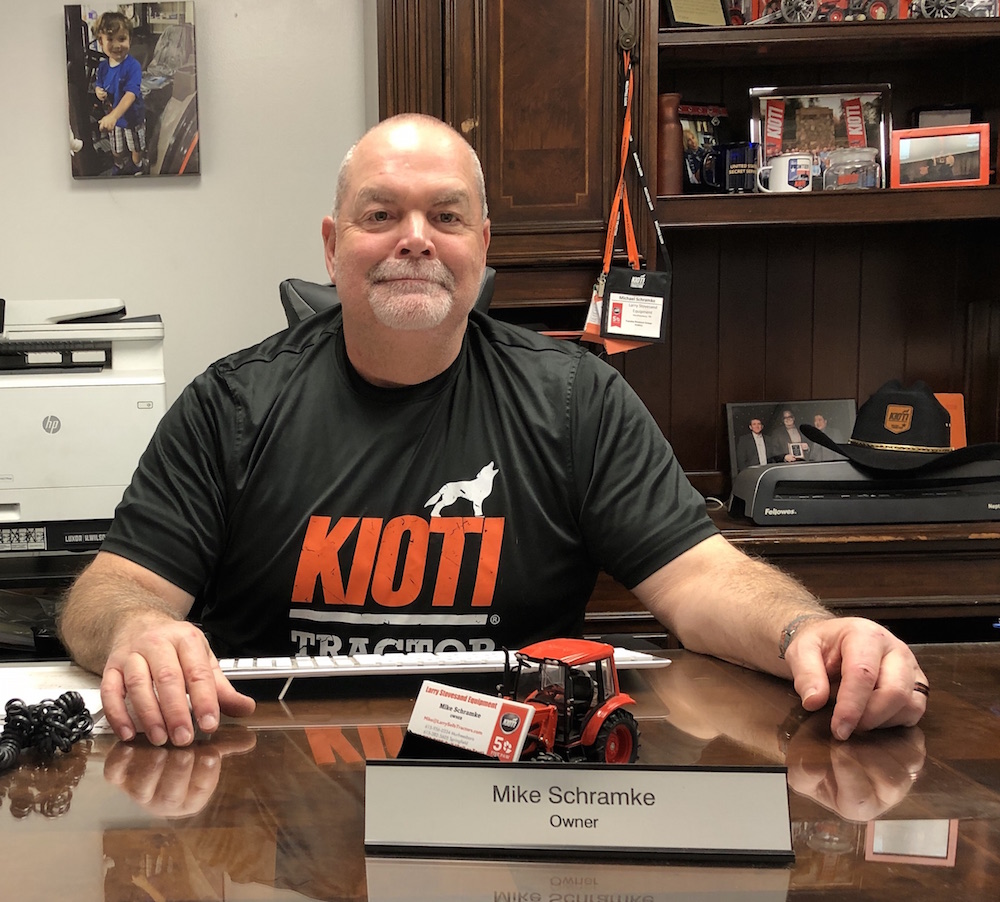 Mike Schramke is co-owner and general manager of Stovesand Equipment.

They followed KIOTI’s recommendations for their initial parts order, keeping in mind that parts demand for a KIOTI dealership is much different than other tractor brands. “KIOTI has been in the country just over 30 years, and their current basic three-cylinder engine design is probably an evolution of the same engine design they had 30 years ago, with the upgrades necessary for Tier 4. I don’t need to stock expensive transmission parts or even clutches. If I need it, I can get the parts quickly from KIOTI. I don’t have much of an inventory. I may have $80,000 in maintenance parts between the two stores,” he says. They try not to have any part in inventory longer than 180 days and take advantage of KIOTI’s parts return policy.

Now is the time to see your dealership rise to the top. This report features three nationally recognized dealerships and reveals their strategies for success. These top dealership owners share their proven approaches on customer service, marketing and management. There’s a reason these dealerships have all earned Dealership of the Year status. Learn how these top businesses have radically grown their revenues and increased their market share. Download now »

The dealership turned to its automotive roots when setting up the Murfreesboro location, such as using its existing dealership management system, Dealertrack. They also knew what was required for the service department. “The first thing we knew we needed was an all-around tech with good diesel qualifications. There was someone who had worked for us and he was working at another auto dealership and, quite honestly, we stole him,” Schramke says.

They also hired other service techs with automotive backgrounds and relied on KIOTI service training to make sure they were ready to handle tractors. They hired car salespeople as well. “We only hire folks from the auto industry. Because they know how to sell,” he says.

The dealership runs lean on staffing and some employees are cross trained. For instance, the store manager also handles sales, along with a salesperson. A parts director oversees the parts staff at both stores and the receptionist is a backup for the parts department.

Deciding on a Second Location

When an opportunity came up for the dealership to take over the Springfield territory in 2018, Stovesand was concerned about taking customers away from the Murfreesboro location, but that hasn’t turned out to be the case.

“My original business proposal was that we would sell about 75% of whatever Murfreesboro sells for our first year. Then, after a couple of years, maybe we could be at 100%. Actually, to date, Springfield is a couple of units higher than Murfreesboro, so it has been a good fit. In the 4 years that we’ve been in business, we went from a new company to North America’s largest selling KIOTI dealer. I’m very pleased about that,” Schramke says.

They opened the store in a former machine shop, which gave them a good service area and an air-conditioned shop, which local techs look for. The showroom is small, but they are making it work for now. “The market has proven to be bountiful, so we will stay in this market. Whether we stay in this facility or not, remains to be seen,” he says.

The staff at the Springfield location is also cross trained. “We’re conscious about budget. We hire good people. We just don’t hire a lot of them,” he says.

Stovesand Equipment has built brand awareness primarily through digital marketing (website, Craigslist and Google ad campaigns) and doesn’t do any television or radio advertising. They’ve found that geofencing is an effective marketing technique. Geofencing is a location-based service that businesses use to engage their audience by sending relevant messages to smartphone users who enter a predefined location or geographic area.

As part of their brand, they show off the personalities of their staff on their website, LarrySellsTractors.com. For instance, the Meet the Team page says, “Some are handsome, Some are pretty. For us that are neither, have some pity.” One technician is referred to as the “diesel doctor” and another the “tractor whisperer.” He knows customers have researched the dealership when they greet his mixed breed chihuahua and say, "Hey, there’s the chief of security."

“That tells me that people are using our website the way I’d hoped they were, and they’re spending a whole lot of time on it,” he says.

Schramke knows how people view car salespeople and they work to gain trust. For instance, all equipment is priced and they offer unique packages. The “Pick 5” promotion includes a KIOTI CK2610 with a loader and 20-foot trailer. Customers then choose 5 additional implements to complete the package. View a video of Schramke explaining the promotion, https://youtu.be/ruY6okR0m4k.

Many customers are first-time tractor owners and don’t have brand loyalty for tractor manufacturers. “We had a fair chance right out of the box to compete with the better-known brands without a prejudice against this brand that some folks might have held,” he says.

The digital marketing and sales efforts are working. “Most of the customers that buy a tractor, I have not met when they say, ‘I’ll take it.’ Many of these people I count as friends, even though I’ve never personally shaken their hands. That’s how business is done today,” Schramke says.