Now is the Time to Reevaluate Service Pricing

Bob Clements believes there’s never been a better time for service managers to take a hard look at their pricing strategies.

“Think about all the equipment that was sold in 2020,” Clements says. “We are going to have a tsunami of service and parts hit us in 2021. I would love for people in service to reevaluate their posted labor rate.”

The president of Bob Clements International has seen a lot in his 36 years in the agricultural equipment business, and he’s convinced that the most misunderstood aspect of service is pricing strategies. Clements says he hasn’t seen much focus on how jobs are priced out, or how to best utilize the 3 types of pricing — menu pricing, flat rate pricing and time and material pricing.

“I think there are literally tens of thousands of dollars every year that dealerships just simply walk by,” Clements says. He believes that if service managers made sure all their menu pricing and basic services were in place — and established their own internal flat rate system — success would follow close behind.

He’s quick to say that no one is at fault for not explaining how to best establish the 3 pricing strategies service departments rely on.

“Nobody’s really walked through how we can use the different pricing strategies,” Clements says.

According to Clements, the most important thing for service managers to do is ensure that they adjust their pricing strategies based upon technician skills, as well as the variety of work that comes in.

“Not all work can have a flat rate, and not all work is set up for menu pricing,” Clements says. “When you think about your shop, understand that there are 3 pricing strategies. As a service manager, you’ve got to look at the job and say, ‘OK, what would be the best way for me to price this job out?’”

Clements knows it’s important to maintain fairness in pricing for the customer, but at the same time, he stresses the need to be fair to the dealership.

“So, it’s critical that you understand the different pricing strategies and how they’re applied.”

“You don’t call around,” Clements says. “That’s what I call pooling, and it’s ignorance. You all call each other and then nobody is where you need to be. The best way to do your labor rate is to call your local car dealership — your Ford, your Chevy, your Toyota, your Honda, your Nissan dealer. They’ll be happy to tell you.

“Then look at their labor rate and look at yours, and you should be right around that same area.”

Clements’ goal when setting a posted labor rate isn’t to be at the middle or the bottom of the range of rates in an area.

“I want to be the leader on my labor rate, but I also want to be the leader in the quality of work I put out and in my timeliness,” he says. “If a customer leaves my shop and says, ‘You guys are higher than anybody else, but I love the work you do,’ that’s the greatest news I’ve ever heard in my life.”

According to Clements, 90% of the shops he works with bill most of their work through time and material rates — and it’s a problem.

“This is the absolute worst way to bill out work,” he says. “There is no more inefficient way to maximize your technicians than to do time and material work.”

Time and material pricing — in which the service manager is unable to give the customer an established price ahead of beginning a job, and instead bills them at the end for whatever time was needed and parts were used — is a billing strategy that should only be used when flat rate pricing is impossible, Clements says.

He also emphasizes the importance of assigning B-level technicians to time and material jobs.

Clements acknowledges that this may feel counterintuitive for many service managers.

“When you’re doing time and material work, and it’s a complex job, you throw your best tech at it,” he says. “But you’re really cheating the shop, because if that best tech had been on any other job, they would’ve produced another 20% — maybe even 30% — more than being on that time and material job.

“So, I’m going to challenge you to put that B-level tech on it.” 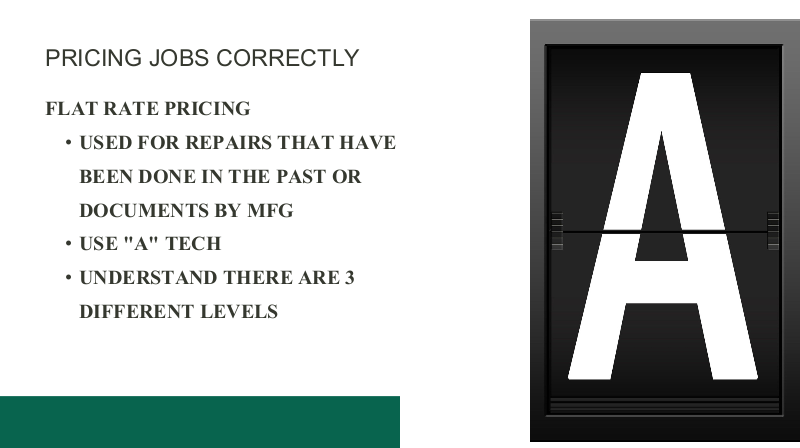 Instead of relying on time and material pricing, Clements wants service managers to establish a flat rate system for pricing. He knows it can be intimidating to launch that system – and that a lot of frontloading work is involved – but he strongly believes it’s worth the investment.

“After being in this business for 36 years and being in hundreds and hundreds of shops, I believe that 70-80% of all the work in a shop can be flat rated,” Clements says. “It takes some time to get it set up, but once you do, it is easy. That’s how your shop is going to produce its maximum amount.”

One place to start when setting up a flat rate billing system, Clements says, is with the shop’s record of previous work orders. For example, if a flat rate needs to be established for adding a clutch to a tractor, he advises finding any clutch jobs that have been done on tractors with tabs on them over the last 3 or 4 years. That information can be evaluated to determine how long those jobs usually take — then, Clements says, add a little time to that, and a flat rate is set.

“To me, it’s a simple way to do it,” he says. “Flat rating is the simplest thing in the world to do. It takes a little bit of time to figure it out, but once you figure it out it’s easy to do so again.”

But what if a service manager wants to set a flat rate for a job that hasn’t previously been performed in their shop? Clements says that’s where the manufacturer’s warranty rate guide comes in handy.

“You can turn that into your own flat rating system,” he says. By looking at the price the manufacturer would pay a shop to do a specific job, the service manager can begin to establish a flat rate for that job, Clements says. It’s possible that the manufacturer assumes that job will take less time than the service manager generally budgets for it — in that case, he says, the warranty recovery rate comes in handy. “This is something you should know as a service manager,” Clements says. “What percent are you recovering when you file warranties? That’s your warranty recovery rate.”

“I would take whatever I needed to do to be at 110%, because if it’s out of warranty, it’s going to have some rust, corrosion and things like that on it,” Clements says. “It’s not going to be quite as fast as if it were brand new. So that 110% is where I would set my flat rate on this job.” 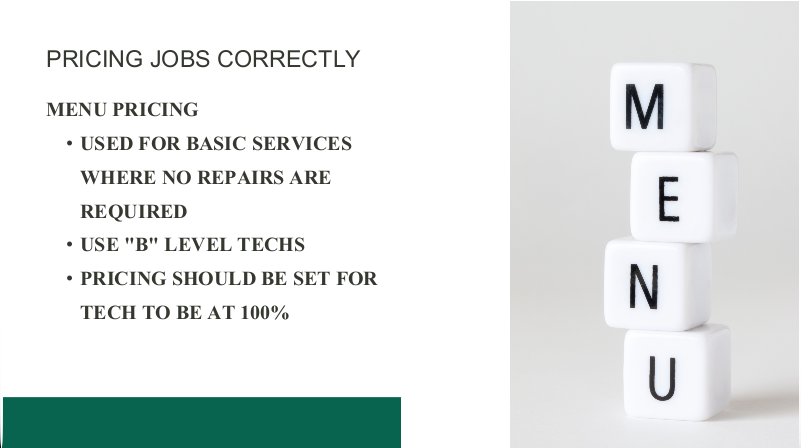 In fact, that flat rate is simply the first flat rate in a 3-tiered flat rate system Clements recommends service managers implement in their shops.

“Your first flat rate is for equipment that’s in excellent to good condition — near new, just out of warranty,” he says. “If I’m looking at a tractor and it’s in good to fair condition — it’s nasty, it’s dirty, it’s got rust and corrosion on it — it’s going to take more time. I would take my first level — that 110% — and add another 30%, and that would be my second rate.”

Clements says the third flat rate level should be reserved for items in fair to poor condition — equipment that’s in terrible condition, and that will be difficult to repair. In that instance, he advises adding another 30% on top of the level two price.

“A lot of times when I talk to people about flat rate, they worry it won’t work because every job that comes in is different,” he says. “I get that. That’s why we have 3 levels of flat rate.”

Unlike with time and material jobs, Clements chooses to put his A-level techs on all his flat rate jobs.

“My A-level techs will kill it on flat rate,” he says. “That’s where the money’s to be made on this. You’ll make the most money that you’ll ever make in your shop when your A-level techs are doing those flat rate jobs.”

Some jobs require a different type of pricing — that’s where menu pricing comes into play.

“Menu pricing is basically a price we have for basic services,” Clements says. “If I’ve got a tractor or loader that’s got a 50-hour service on it, you as a service manager should already have gotten with the parts manager and built out a menu package for that. We already know what filters we’re going to need, how much time it’s going to take.”

Clements advises service managers to bundle the cost of parts into the pricing, rather than listing them out separately — that way customers don’t feel like they’re being nickel and dimed.

As with time and materials rates, Clements says menu rates should be set according to the abilities of a B-level technician in the shop. “This is exactly a job that the B-level tech should be on, and I would make sure I’ve got my pricing set so when a B-level tech does this, they can be at 100% on it,” he says. “So, if an A-level tech does it, they should beat your time by 20%. I encourage you to do this.”

Maximizing Efficiency in Your Service Process: Increasing Your Billable Time

Service Coordinators Enhance the Flow of Your Service Department

Is Marketing Worth It When Dealers Can't Get Inventory?