Home / Blogs / From the Desk of RLD / Highlighting Trends, Innovation from the 2015 GIE+Expo

Highlighting Trends, Innovation from the 2015 GIE+Expo 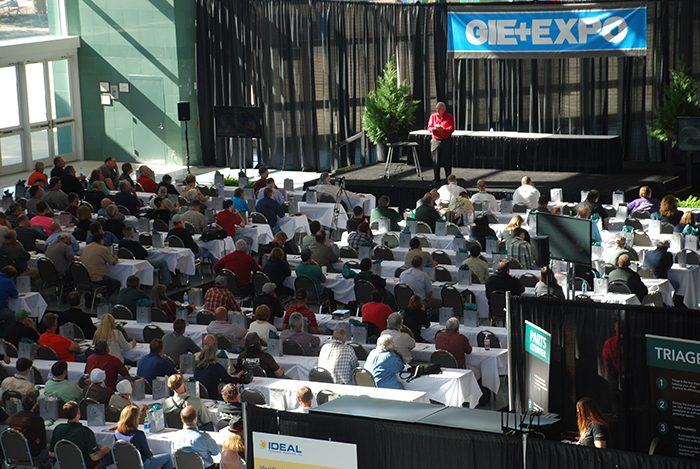 This wasn’t the year for groundbreaking new products at the recent Green Industry & Equipment Expo (GIE+Expo), but manufacturers at this year’s show still unveiled impressive enhancements and innovations to help differentiate their products in the crowded zero turn, UTV and outdoor power equipment categories. More than 100 new products were introduced along with new companies debuting at the show and new partnerships being promoted. Here’s what stood out to our team from among the record-breaking number of nearly 900 exhibits.

The rural lifestyle and turf segment is continuing its trend of growth and optimism. Dealer registrations for the show were estimated to be up by more than 9% and the lines for day 2 of the show, which was open to the public in addition to dealers, stretched throughout the front of the exhibit hall. Several manufacturers told us sales this year were up 100% over last year — levels that many industries never see.

At Rural Lifestyle Dealer, we’re measuring this growth right now in our 2016 Dealer Business Trends & Outlook survey. We would appreciate you taking a few minutes to take this short survey and fill us in on what you’re forecasting for 2016.

Exmark, Toro, Dixie Chopper, Gravely and others showed off new seats and suspension platforms on their zero-turn mowers. The introductions are part of a trend to finetune the zero turn experience.

Enhancements to previously introduced UTVs were another trend. For instance, Kubota introduced its K-Vertible cargo conversion system for its RTV-X1140, which converts the vehicle from a 2-person to 4-person configuration, adjusting the size of the cargo bed accordingly. Gravely announced its snow and landscaping kits for its Atlas JSV utility vehicle, which included products like blades, salt spreaders and tool carriers. John Deere debuted its XUV 825i Special Edition Gator, with two integrated cargo tool boxes. Mahindra’s mPact XTV 750L side-by side features a bed where three sides can be folded down, as well as additional storage compartments.

Residential and pro-sumer users also received their fair share of attention, too. Simplicity and Snapper announced their zero-turn mowers, the Courier and Snapper 360Z, that feature an integrated cargo bed with a 50-pound capacity.

Products and features for landscapers dominated many introductions. For instance, the suspension seats were touted for increasing operator efficiency as well as comfort. EFI engines from Kohler, Briggs & Stratton and Kawasaki were a highlight again this year. Landscapers were also the target for new stand-on mowers from Hustler and a new commercial zero-turn from Bad Boy.

Manufacturers are expanding their battery-powered equipment for both the commercial and residential segments. For instance, Mean Green Mowers announced its new line of battery-powered commercial mowers and new battery backpack models of its hand-held lineup. Stihl announced a blower and line trimmer for its battery-power KombiSystem. Gas-powered versions of hand-held tools were introduced as well by Stihl and Honda with its new VersAttach system. The VersAttach system is Honda's first entry in the split-shaft category — with its 6 attachments.

A new product from a familiar name — Robert Foster of Intimidator — debuted at the show, the Spartan zero-turn mower. The company announced 5 models targeted for commercial and residential users with the goal of simplicity.

A few other highlights included a new partnership, the Cub Cadet Powered by CORE, hand-held battery powered tools; a return for the second year of EGO with its battery-powered walk-behinds and outdoor power equipment; the first appearance by Columbia — MTD’s oldest company — and its mower lineup; and an expanded presence by Big Dog Mowers, promoting its promotional partnership with Cabela’s. There was also a global feel from the presence of Masport push mowers from New Zealand; AS Motor mowers and brush cutters from Germany; and others.

For our editors, the Spartan mower was a stand-out product along with Kymco’s UXV 500I G side-by-side vehicle, which features a totally enclosed fan-cooled 5kW generator. The vehicle was released earlier this year and is unique among UTVs for its generator capabilities.

We’re watching for new advancements on the technology side in the coming year. For instance, Cub Cadet’s Bluetooth app made a big impact when it was announced last year. At this year’s show, Husqvarna introduced its Automower 450X, with a mowing capacity of 1.25 acres and its integrated smartphone app for controlling the mower.

One manufacturer thinks data gathering will be the next focus and several manufacturers are already developing early warnings regarding service. Where else can data be used and how might it influence the human/machine interaction?

Check out our photo gallery from the show and watch for the video interviews we’ll post over the next several weeks.

Finally, a question for you: What new product introduction will have the most impact on sales for your dealership in 2016?