Honda creates the world's most frightening lawn mower thanks to a challenge from British television program "Top Gear."

British TV series "Top Gear" is known for building some pretty outlandish automotive creations. The latest in that lineage is a Honda FH2620 mower. That doesn't sound very exciting until you learn just how heavily modified it is, from the tires to the engine. 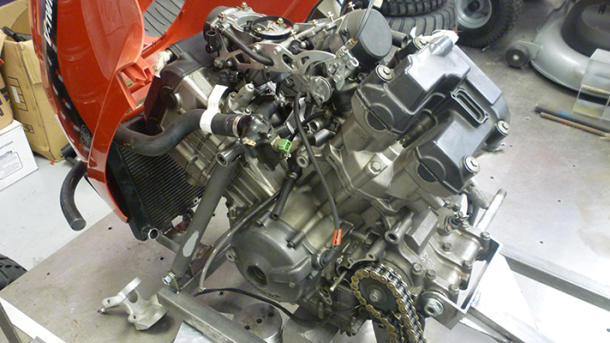 The lawn mower is heavily modified with a motorcycle engine. (Credit: Top Gear)

"Top Gear" called in Honda racing group Team Dynamics to help turn the lawn mower into a lawn monster. The steering rack is from a Morris Minor. It got a fresh set of racing wheels and tires. They managed to stuff a VTR 1000cc motorcycle engine into the thing. The theoretical top speed is 130 mph.

The modifications don't end there. The back axle comes from a go-kart. There is one important requirement that can't be overlooked here. This beast of a lawn mower still needs to be able to cut grass. The Honda team dumped the regular metal blades and installed two electric motors with two bits of brake cable attached. Those suckers spin at 4,000 rpm. That might be enough to slice through an entire tree.

"Top Gear" released a video showing a test of the apocalyptic lawn machine, in which it can be seen spitting fire out the side. This isn't your grandpa's push mower. For starters, it makes an almighty racket when it runs. The mere sight of it should cause out-of-control lawns to shiver with terror.

Should someone be both bold and crazy enough to try to get the lawn mower up to its theoretical top speed of 130 mph, that driver would most likely set a new world record for the fastest lawn mower. Yes, there is such a thing. Let's hope The Stig gets a chance to take it for a spin around the "Top Gear" test track.