Power Centers of Madison: Gearing Up for Winter

Following a wet summer, Power Centers of Madison was still supporting mower customers as the team prepared for winter sales.

Pictured Above: At the start of fall, Power Centers of Madison was transitioning its displays from summer equipment to winter snow removal equipment. With so much moisture in late summer and early fall, the dealership still had customers mowing multiple times a week at the beginning of October.

As fall rolled around in southern Wisconsin, the grass was still growing following a wet summer. Power Centers of Madison still had selling and servicing mowers top of mind, but the process of getting snow removal equipment into the showroom and displayed outside was also well underway.

“We had quite a bit of moisture this summer, so people were mowing a couple times a week. That really helped us,” co-owner Duane Nolden says. “With the moisture being up, our summer sales were better than what we thought they were going to be. And until we get a couple good freezes, people will keep mowing.”

Nolden is optimistic about their winter sales this year, but admits that with sales being so dependent on weather and the amount of snow that falls it can be hard to make an accurate sales forecast and stock the right amount of inventory.

“We started moving the snow blowers into the showroom in September. We do have some left over product because last winter was not a snowy one. So, we’re trying to move some of that older product and discounting it a little bit,” Nolden says. Because the dealership has inventory that carried over from last winter, Nolden says he ordered quite a bit less new equipment this year.

During the fall in years past, Power Centers of Madison has run tune-up specials for winter equipment. But, since the service department has been so busy with lawn and garden equipment and is short on technicians, the dealership is skipping the promotion this year.

“Even without the promotion, we’re still getting four or five customers bringing in snow blowers for tune ups each day right now,” Nolden says. “The downside of not running the promotion is if we get a ton of snow, we’re suddenly going to have a lot of equipment in here at once because people didn’t check their equipment, didn’t start it or do anything until the first snow fall.”

Nolden is optimistic they’ll see good sales this fall and winter. “The weather predictors are showing a colder and snowier winter in our area, and that will be good for sales. We’ve had some [snow blower] sales already, not as good as a normal year, but people are coming in and looking at the equipment.”

Power Centers of Madison has a goal of improving sales by 5% compared to 2015. As of early fall, Nolden says the dealership’s sales were down slightly from their goals, mostly due to the mild weather in January and February. “Sales of summer equipment went better than we anticipated, and if we get an early snow that would get us to our goal, no problem,” he says.

Power Centers of Madison added an 8 x 38 foot mezzanine to the showroom at its Middleton, Wis., store. The space is ideal for keeping off-season equipment on display.

Nolden and co-owner Ed Prochaska tried something this fall that they had never done before. Power Centers of Madison participated in an auction organized by a local Future Farmers of America (FFA) group. “FFA approached us about participating in the auction, and we had stuff sitting around here that we needed to get rid of. If it didn’t sell, it was going to be recycled,” he says.

“It was decks that we had taken off a unit or just older product that maybe didn’t run any more that we took on a trade and then sat all summer because we didn’t have the time to fix it up. If it sits through the winter, it’s pretty much going to be garbage by the end of the season.”

If you have old used equipment you can’t sell, consider working with a local organization’s auction to move it out of your inventory.

Look at the response you get from advertising before putting a plan in place. If customers don’t respond to snow blower ads until there is snow on the ground, you may want to hold off until the late fall or the start of winter to start running those ads.

The auction was held Oct. 8 and while Nolden hadn’t gotten the official results back yet, he was pleased with the outcome overall. “We sold more than we expected, which was nice. We did have a few pieces of equipment that had higher reserves on them that didn’t go. Those were newer items, and we brought them back to the dealership and will continue to try and sell them,” he says.

It wasn’t just the first auction Power Centers of Madison participated in, it was also the first auction that this FFA group had put on. “The whole thing was thrown together in about a month, and FFA did all of the promotion. We would definitely do it again if they were to do another one. But, I think we’d do some of our own promotion of it as well,” Nolden says.

A portion of the proceeds from the auction went back to FFA, which was something that appealed to Nolden. “It was actually the FFA group from the school I went to and we like to support them any way we can.”

Finding enough qualified technicians continues to be a challenge for Power Centers of Madison, particularly at its Sun Prairie location. Over the summer, Prochaska was looking for a new technician to help ease the workload in the service department, and the dealership did recently hire someone.

“The weather predictors are showing a colder and snowier winter in our area, and that will be good for sales …”
– Duane Nolden

“But we’re still looking for one more tech for over there. We just want to keep those guys from getting burnt out from working too many hours,” Nolden says.

Having a third technician on staff at the Sun Prairie location has helped the service department improve its lead times. “We had been almost 4-5 weeks out for awhile there, and now we’re back to being just a couple weeks out on work,” Nolden explains.

Duane Nolden and Ed Prochaska are the co-owners of Power Centers of Madison. The dealership has locations in Middleton and Sun Prairie, Wis.

Earlier this fall, Nolden and Prochaska attended the Ariens dealer meeting in Amelia Island, Fla., and came back with some new channels to explore for finding technicians and other employees. “We came back with a few ideas we’ll probably pursue, like using LinkedIn. They also talked about the usual things like working with your local tech schools,” Nolden says.

However, it was on the way home that the most interesting idea for finding techs came to Nolden. “On the flight home, I was sitting next to a young guy on the plane and he was telling me how all his buddies who were in the military can’t find jobs once they leave the Armed Forces.

“I told him, ‘If those guys took small engine courses or anything in marine or ag or automotive, they’d have a job.’ The thing is, I don’t know how you get that across to those guys. You know they work hard. All they need is a little knowledge and, boy, you could have a whole other group of people to count on. This might not be glamorous work, but it is a good paying job,” Nolden says.

Looking ahead, Nolden says they’re planning some improvements in the shop at the Middleton store this winter. While Middleton Power Center has a large service area for a rural lifestyle dealership, storage space for equipment, particularly the handheld equipment, in queue is limited. Currently, customers’ outdoor power equipment is just lined up on the shop floor, taking up considerable space that could be better used for servicing the equipment rather than just storing it. 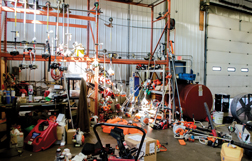 During the winter, the Middleton store will be working on creating a terraced system to store outdoor power equipment that is waiting to be worked on by the service department. Owner Duane Nolden says they’ve already bought the winch that will be used to raise and lower the equipment.

To solve the problem, Nolden says they are going to create a terraced storage system that would use a winch to lift equipment up and down when needed. “We considered building a mezzanine to store the equipment, but decided that would be a lot of walking up and down for the technicians,” he says.

Nolden says they’ve already purchased the winch, but the rest of the project’s completion will depend on how busy winter is.

Earlier this year, the Middleton store added a mezzanine to its showroom. The project added additional space to display equipment. The 8 x 38 foot space is used to display off-season equipment.

Looking ahead to 2017, Nolden says they are aiming to match this year’s sales. “With the new Ariens and Gravely introductions, there are a few new products that might excite people. Toro has some new products on the residential side, too, that should help us,” he says. Kim Schmidt is an Associate Editor of Rural Lifestyle Dealer. She is also the Managing Editor of Farm Equipment and the host of Ag Equipment Intelligence’s On The Record. An award-winning writer, she worked 7 years in business-to-business trade media before joining Farm Equipment in 2012. She is a journalism graduate of Marquette University. Contact: kschmidt@lesspub.com

Season-to-Season Part 1 of 3: Matching Customers with the Right Product All Year Long

Reinvesting in the Business