Landscapers Outlook for Equipment Purchases 2017 vs. 2016 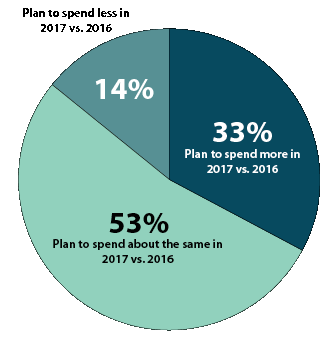 According to a survey of U.S. landscapers by Seaport Global Securities, 33% plan to spend more on equipment in 2017 than they did last year, while 14% plan to spend less.

Landscape contractors, one of the prime market segments for rural lifestyle equipment dealers, continue to show strong growth potential in 2017.

According to the results of an exclusive survey by investment bank Seaport Global Securities, more than 80% of U.S. landscapers they surveyed are forecasting revenue growth in 2017.

Summarizing the survey results, Michael Shlisky, machinery analyst at Seaport Global who conducted the survey and analyzed the results, said, “39% of landscape contractors expect to see revenue growth of 10% or more in 2017, up from 33% in the SGS December survey.

“About 31% expect to see revenue growth of 5-10% this year, relatively unchanged from the last survey, while 14% expect growth of 2%-5%, which is down from 18% 3 months ago. Roughly the same percentage of respondents, about 18%, expect a flat or down year vs. 3 months ago.”

Shlisky adds, “Landscapers continue to expect to spend more on equipment in 2017 vs. 2016.”

Employment in landscaping services has also showed solid growth during the past 3 years.

Shlisky also noted that sentiment in the sector also improved slightly since the previous survey in December 2016, with 44% of respondents “feeling better about their business than 3 months ago.”

When it comes to hiring, it would appear that outdoor power equipment dealers exercise a significant level of discipline. Between 2013 and 2016, OPE dealership revenues varied as much as 50%, from a low of $2.85 million in 2014 to more than $4.3 million in 2016. Despite the wide swings in revenue, average total employee counts showed little variation. In fact, several major positions showed a decrease during this 5 year stretch.