Landscape contractors are expressing positive sentiments about growing revenues and purchasing equipment through the remainder of 2017 and into early 2018, according to Seaport Global Securities’ most recent quarterly survey of landscape contractors.

“Overall, we believe our survey underscores the improving financial position at many landscapers, as well as the potential for further growth in equipment sales to this industry next year,” Shlisky says.

A summary of the survey results indicates:

• Purchasing Intentions: Approximately 32% of the respondents plan an increase in equipment purchases in late 2017 and early 2018, while just 8% intend to curtail their purchases.

• 2018 Revenue Outlook: First look at next year’s prospects is positive. Roughly 32% expect increases of 10% or more in 2018, with an additional 32% expecting an increase of 5-10% and another 32% expecting an increase of 2-5%. Just 4% expect a flat year or a decline in 2018. “We believe this is a favorable backdrop for power equipment purchases, at least to start the year,” says Shlisky.

• Improving Sentiments: Among the respondents to the survey, 56% said they feel better about the business today vs. 35% 3 months ago. The remaining 44% of respondents reported no change in sentiment. 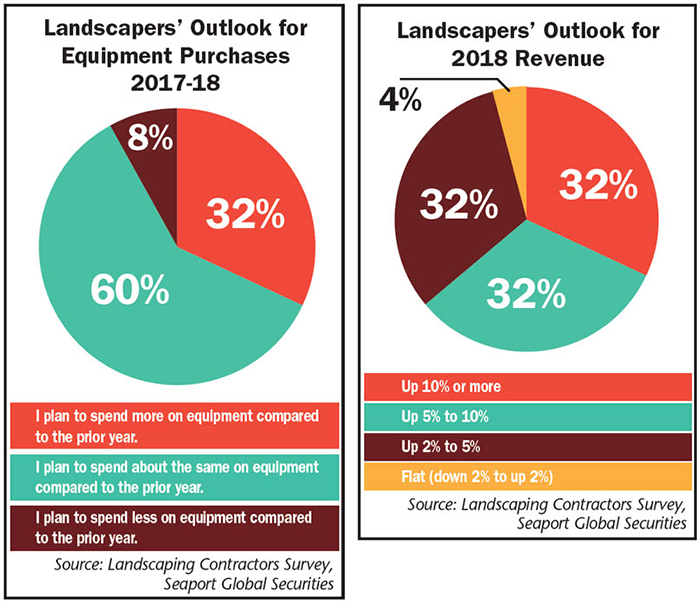 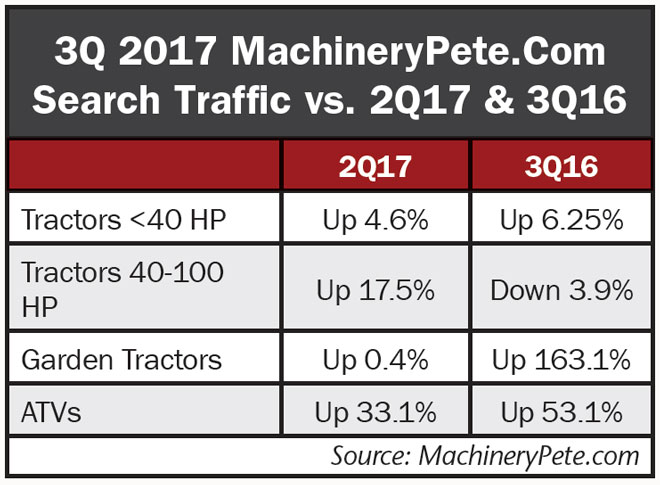 For tractors under 100 horsepower, Peterson comments that “Strength in the general economy (low unemployment, rising 401K balances) are fueling buying interest for new and used tractors in this lower horsepower range from hobby farm owners.”

Regarding garden tractors, including zero turns, he says, “The summer months saw active buying conditions. Search traffic was up 163.1% vs. the third quarter of 2016. Dealers we’ve talked with are reporting solid new and used buying activity with garden tractors.”