Chapter 2: See How Your Expenses and Margins Stack Up 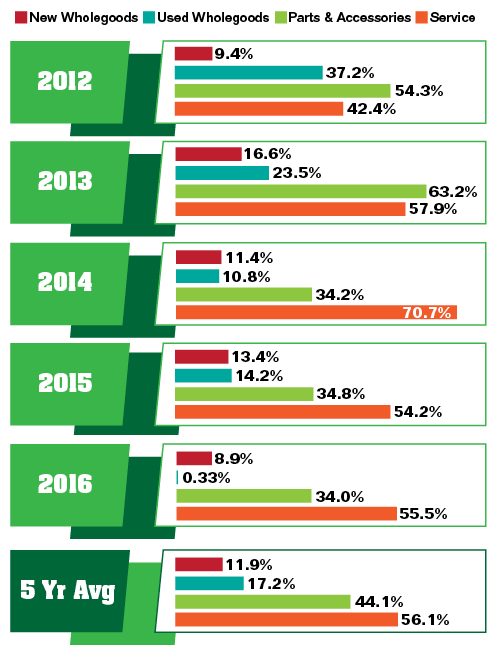 On average, OPE dealers were only able to maintain about a 12% gross margins on new wholegoods.

Expenses associated with salaries and benefits, as dealers have come to expect, represent the single highest expense in any given year. Ranging from 12.9% in 2013, the first year of the sales downturn, to less than 8.5% as the industry entered full recovery mode. On average, total salaries and benefits were 10.9% during the period.

Interest expense, which includes floorplan costs, can reflect the rate of inventory turnover, among other things. In 2012, dealers incurred the highest level of interest expense at 0.68%, which was more than halved (0.32%) by the time the sales recovery was in full swing, as recorded in the 2016 study.

Through the first 4 years of the 5 years considered in this report, gross margins ranged from 21-25%. But in the 2016 study, margins saw a significant decline to 17.5%.

Margins on parts and accessories showed some erratic results during the years considered, but levels between 2014-16 averaged 34.3%. Gross margins on service activities showed some irregular trends as well, but over the 5-year period, service margins averaged 56.1%, which would be considered reasonable and healthy.

Keep this second set of numbers handy — and share with your team — by downloading Measuring Up Chapter Two: See How Your Expenses and Margins Stack Up.

Continue to the next page for Chapter 3: Benchmarking Inventory and Asset Turns