107-Year-old Danuser Expands Facility ‘for the Next 100 Years’

The new space will offer a central location for offices, a cafeteria, training and conference rooms. Glenn Danuser, vice president and part of the fourth generation in this family-owned company, says, “We’re building this facility for the next 100 years.”

Danuser shares with Rural Lifestyle Dealer what’s behind the expansion and what’s ahead for the company. 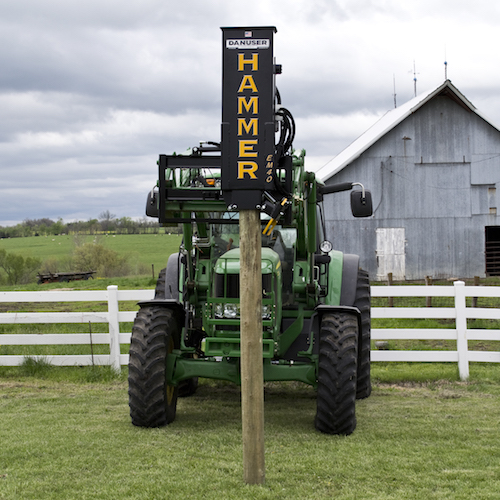 The Danuser Hammer EM40 a 40-inch drop hammer design. Operators can achieve a full stroke with every cycle, or utilize the short stroke feature to finetune the depth.

Rural Lifestyle Dealer: Why are you undertaking the expansion now?

Glenn Danuser: We’ve added on to our facilities over the years and it was time to sit down and evaluate Danuser as a company. It’s easy to add more manufacturing space, but there comes a time when you need more office space. We want to be able to double our office staff, which is at about 25 employees now.

As we grow and transition over the next 100 years, we’re going to need more customer service agents and hire more full-time salespeople. Also, with the expansion, all of our engineers will be sitting in the same space so that will open up lines of communication and improve collaboration. The office expansion is phase 2 of our building program. Phase 1 was a 32,000-square-foot manufacturing facility.

We wanted the space to be uplifting and motivational, so we added LED lighting, automated lighting and natural sources of light. The expansion will look like two stories from the outside, but the top of the expansion will be a display area surrounded by glass windows. We’ll be able to display the first post-hole digger that grandpa made along with other historical products.

Danuser: Going back to 1996 when I first came back to the business and was figuring out how things were operating, I wanted to know why our distributors weren’t ordering more. I told them to be brutally honest and a few told me that we were stale. They said, “You make the best augers, but there are only so many people that need augers.” We had not brought forward anything new and innovative in a long, long time. 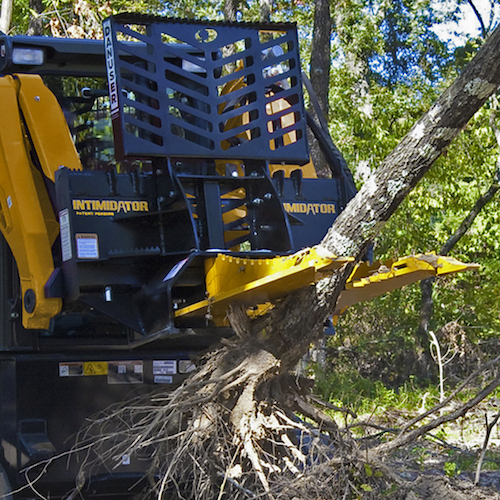 The Danuser Intimidator attachment for a skid steer or tractor can be used for land clearing, to remove obstacles and other tasks.

Eight years ago we looked at heavy hydraulic augers for skid steers — before that we had only been focused on 3-point equipment. Then, we came out with a one-person driver — the Danuser Hammer — and took over the driving industry. Before that, driving a post was basically a two-person job. We have the patent for the grapple that takes the post off the ground, sets it and levels it and drives it.

This one-person driver solved some problems that customers told us about. For instance, on certain tasks, you may not want to have extra people around for safety reasons. And, you have to think to the future. What if there’s nobody available to help you?

We’re trying to add at least one attachment a year, but we’re not going to focus on things like buckets and common attachments. Many others are building that kind of equipment. We’re trying to find those niche needs. For instance, there were a lot of good post drivers, but with the hammer drivers, we showed how you can always improve equipment.

We also realized that a lot of people were using our big hammer driver to drive T-posts. They were spending thousands of dollars just to drive T-posts, so we brought out the T3 driver for T-posts and 3-inch O.D. (outside diameter) pipe. It’s a way for us to expand into those smaller projects. So, for equipment dealers who are selling a skid steer or a tractor, it’s something else they can add to the ticket.

Tree pullers are another example. People had been asking for tree pullers for skid steers for several years. We made our tree puller attachment with longer jaws, so that the operator can dig deeper. It’s been one of our best sellers.

We’ve hit three or four home runs in a row now. Now, we have people’s attention and they’re asking us, “What’s next?”

RLD: We’re interested, too. What’s coming up next from Danuser?

Danuser: When I think about what’s next, I think about the projects on the farm that I hate doing. What could I build to make me want to tackle that project and check it off the list? 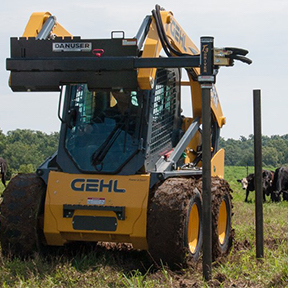 The T3 Driver drives T-posts and up to 3-inch O.D. pipe and operates at up to 6 hits per second.

I’m a firm believer in the “Swiss army knife” approach for new products — building products that can do more than one task. A farmer or contractor will pay more for a product if they can perform more than one task with it. So, what’s coming next are additional products that are innovative, heavy-built and simple to use. In some cases, this means designing attachments that are completely new to the market and, in other cases, it is identifying issues or weaknesses with existing products that are on the market and making improvements and solving problems.

RLD: What are you facing from your competition?

Danuser: We’re starting to see more and more companies entering the attachment business, but we don’t get too worked up looking at other companies’ products and pricing. Competition is good for everyone. It keeps companies “on their toes” and gives consumers the option of shopping around.

We want to segregate our company. We want to make innovative attachments that can do more than one function, so they can be of a greater value to our customers.

Why are we still here after 107 years? One word that sums it up is quality. We don’t compromise on that. We put American quality first and we keep out innovative spirit going.

What Should be Next for the Dixie Chopper Brand?