MINNEAPOLIS — Rural Lifestyle Dealer Managing Editor Lynn Woolf was recognized at the American Agri-Women national convention, honored with the organization’s President’s Award along with Arwen McGilvra. Woolf is a member of Kansas Agri-Women and McGilvra is a member of Oregon Women for Ag. 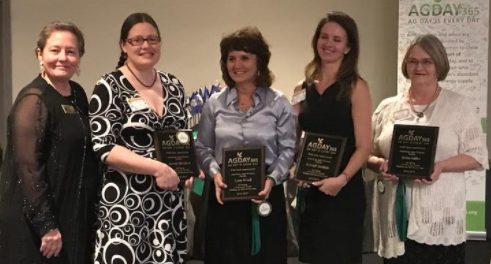 President Doris Mold of Minnesota remarked on the great amount of work Woolf and McGilvra did for the all-volunteer organization during the year and thanked them for being the “wind beneath her wings.”

Woolf was also recognized for her part in the Ag Day 365 campaign, along with Kristi Miller, Mallory Phelan and McGilvra of Oregon Woman for Agriculture and Krystal Doolittle of Iowa Agri-Women.

Ag Day 365 (see twitter.com/AgDay365 and facebook.com/AgDay365) was a year-long advocacy initiative started by American Ari-Women during the 2016 National Convention and formally kicked-off at National Ag Day 2017 in Washington, D.C. The “Ag Day is Every Day” campaign, or #AgDay365, is inspired by and builds on the importance of connections made between the public and farm and ranch producers on National Ag day, which is celebrated in March and organized by the Agriculture Council of America.

About American Agri-Women
American Agri-Women (AAW) promotes the welfare of our national security through a safe and reliable food, fiber and mineral supply. Since 1974, AAW members have worked together to educate consumers; advocate for agriculture; and offer networking and professional development opportunities. For more information, or to join, visit AmericanAgriWomen.org. Find AAW on social media at: facebook.com/AgriWomen and twitter.com/Women4Ag.