By Rural Lifestyle Dealer Staff posted on May 7, 2018 | Posted in Manufacturer News, Data & Forecasts
Source: Ag Equipment Intelligence
Pictured Above: Considering all levels of big dealers — those with 5 or more store locations — more than one-half of the 188 big dealerships are John Deere dealers.

The following story is an excerpt from the 2018 'Big Dealer' Report. For a thorough, by-the-numbers analysis into the shifts in dealer ownership, along with insight into the implications these shifts have on the industry and your business, check out the complete 2018 ‘Big Dealer’ Report. In addition to a complete listing of "big dealers" by number of locations and major brand, you’ll also find a complete listing of shortline brands and other equipment carried by these dealers. Claim your copy of the soon-to-be-released 2018 ‘Big Dealer’ Report today for only $89. Learn More.

Editor's note: "Big Dealers" are considered those retail organizations that own and operate 5 or more farm equipment store locations within the U.S. and Canada.

If there is one factor that is driving the biggest farm equipment dealerships in the U.S. and Canada to continue adding locations, it is the need to scale their businesses to keep up with the demands being placed on them. It’s an ongoing trend that isn’t slowing down or going away.

Investopedia defines scalability as a “characteristic of a system, model or function that describes its capability to cope and perform under an increased or expanding workload. A system that scales well will be able to maintain or even increase its level of performance or efficiency when tested by larger operational demands.”

Some say dealers need scale to not only keep up with their customers’ demands —  farmers who are also expanding — but to be profitable.

In compiling the 2018 Big Dealer report, it was interesting to note that there are actually fewer “big” North American farm equipment dealer-principals or ownership groups at this point in 2018 than there were a year ago. For the purposes of this report, “Big Dealers” are defined as those dealership groups that own and operate 5 or more farm equipment retail locations.

Currently, the count is 188 big dealers vs. 191 a year ago. Despite fewer dealership groups overall, dealer consolidation is not slowing down. In fact, a quick review of the numbers shows that growth of the “biggest” big dealers continues to escalate, while the number of the “smallest” big dealers is where the shrinkage is taking place.

Since 2009, Ag Equipment Intelligence, in partnership with the Machinery Advisors Consortium (MAC), has compiled a ranking of farm equipment retailers based on the number of ag stores. The first “Big Dealer” report was published in 2011 and has been updated annually ever since. During the period of 2011-18, “big” farm equipment dealerships have grown by more than 11%. But this doesn’t totally reflect what’s really happening within the farm machinery retail distribution channel.

Overall, the percentage of dealers in each of the 4 different size categories — 20-plus stores, 15-19 stores, 10-14 stores and 5-9 stores — held steady during the first 7 years of the study, but significant shifting has taken place particularly in the past year.

The next tier, dealers with 10-14 store locations, grew steadily over the past 7 years. Starting at 17% of the total in 2011, by 2017 it had increased to 21% and stands at about 23% in 2018. While dealers in the smallest group, 5-9 locations, held at about 75% of the total through 2013, the following year its percentage dropped to about 66%, where it stayed until the current year. In 2018, the smallest “big” dealers’ percentage of the total fell to about 55% of all big dealers. Clearly, it has been dealers in the 15-19 store locations’ group that has shown the most continuous growth during the past 7 years. 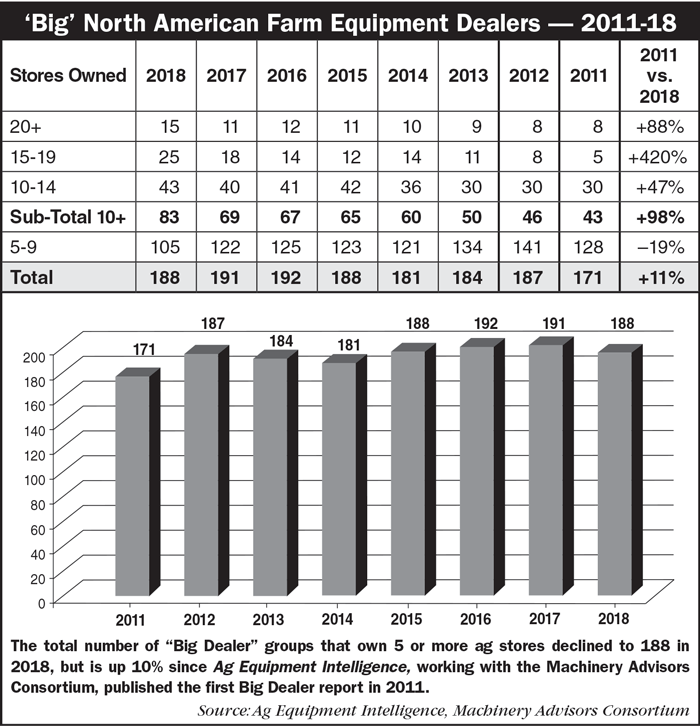